“I HEARD THAT:” JUNETEENTH CELEBRATION ON DA ‘MO!…. 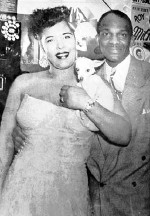 TODAY, June 19th, African American Emancipation Day! From its Galveston, Texas origin in 1865, Black slaves received word of their freedom! The observance of June 19th has spread across the United States and beyond, in commemoration of freedom and equality. The day, known as “JUNETEENTH,” celebrates Black heritage, Black pride, Black consciousness, music.

The late successful businessman Wesley, Johnson, Sr., started the tradition of Juneteenth in San Francisco, read column @www.beyondchron.org/news/index.php?itemid=7041, passed during the early 80s, BUT the tradition of the Juneteenth Festival and Parade continues every year in the Western Addition, once a thriving Black business community, now part of the Fillmore Renaissance district, BLACK Fillmore NO MORE!!!

The famous CHICAGO BARBER SHOP, 1515 Fillmore near Geary, abruptly closed several months ago, shaded – a SHOCK to the community (owner got behind in payments, thus after 5 months or so – the end). Due to health issues, black-owned MRS. DEWSON’S Hats, Upper Pacific Heights, on Fillmore, closed after years in business.

NOW, the oldest black-owned bookstore in the country – MARCUS BOOKSTORE, 1712 Fillmore, between Post and Sutter, threatened with EVICTION, yesterday, Tuesday, June 18, by new owners who bought the 3-three story building in a bankruptcy proceeding in 2009. Several front page reporting on the bookstore, one , the Examiner, June 9. The Black community has rallied to save the store and eviction of owners, Gregg and Karen Johnson! STAY TUNED!

IN UNITY, the San Francisco 63rd Annual JUNETEENTH Festival and Parade, presented by the San Francisco Juneteenth Committee, this year joined by The San Francisco NAACP Branch, was in jeopardy due to unpaid bills from the previous year, and lack of FUNDING ! BUT, somehow, it happened! Usually two days, this year ONE day (11 a.m. – 7 p.m.) last Saturday. Fillmore street closed off from Turk to Sutter Street. – the block where Marcus Bookstore is located!

Missed the parade, but on the street in the afternoon. Parked on Post street, noticed Sutter block dead, no booths, nothing – should have been a rally, if nothing else, in front of Marcus Bookstore, and live music. Books for sale!

Surprised to see flashy CORVETTE Cars revved up, near Boom Boom Room, drivers gathered as folks admired the scene – the cars were featured in the Parade, which I missed. Didn’t view the entire street scene, got as far as the Gene E. Suttle, Jr., Plaza, Fillmore and O’Farrell Streets – live music – missed the performance of Fillmore musician icons – Saxophonist Bobbie Webb and FILLMORE SLIM – featured TOO early; infact, they should have been the closer!