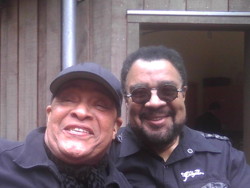 The spot where Jarreau and Duke got their start, and music connection that has lasted since those years of 1965-1971 when the club closed. The two never forgot their roots, or early beginnings, a friendship and music collaboration; each have their independent tours, but come together to perform!

The Grove was chilly, high fog, but HOT on stage! Jarreau, one of the pure jazz singers (my favorite), wore his usual black tam, hollered, “Hello, San Francisco,” commenced to kicked off the afternoon, backed by Duke and musicians, with “Moanin” hip, finger-poppin’ blues groove, giving it his special feeling, grooved across the stage, hand held mike clutched as he embraced the mood; upon completion, cried out “How do you like me now” ? Rave applause from the overflow crowd. Segued into a medley of ballads that included “You are so Beautiful,” “Teach me Tonight,” A teaser – Al Green’s “I’m so in Love with You,” “We’re in this love together,” AND funkin’ “COLD DUCK,” to which Jarreau allowed, just like we did at the Halfnote! YES!

Duke and swinging collaboration of musicians, performed many of his instrumental hits, plus soulful, vocalizing emotionally, “No Rhyme or No Reason,” and cool, “You Touched My Brain.”

Prior to the concert, enjoyed a joyous conversation backstage with the two – CAPTURED the photo you see! Sadly, Duke recently lost his wife Conne of many years; still grieves.

Both artists shared their attachment to the City – Duke, born in San Rafael, grew up in Marin City. Jarreau traveled west from Milwaukee, Wisconsin, lived near Franklin Hospital, upper Divisadero, played the Halfnote when he and Duke formed a jazz band.

During their performance, Jarreau acknowledged the CD, for sale, dedicated to the neighborhood club – recorded last year, Al Jarreau and the George Duke Trio “LIVE at the Halfnote 1965, Volume 1.” with original musicians during that time – bassist JOHN HEARD, AL CECCHI, compiled recorded live performances ( unbeknownst to Warren), stored master tapes in Duke’s library archives, Now HISTORICAL GOLD! Duke expressed on the CD “a time when Al and I were laying the foundation for when we came to be as artists”. Look at them now, TOP of their game!

There are 14 songs on the CD, include live recorded conversation at Duke’s Southern CA. home, open with dialogue with Jarreau, and group that include H. Warren, (youngest bar owner on the street), talking about those days of the club, joking, telling stories about the experience – the CD is rich.

Privy to a copy several months ago, sent by Warren, brought back memories for me (I moonlighted as a cocktail waitress, worked a day job for the federal government ), lived several blocks away.

The Halfnote was SPECIAL! The experience introduced me to the IN CROWD – a time when, then Attorney WILLIE BROWN, JR., was running for state office, representing his district Assembly seat ; members of the Warriors Basketball team – Al Attles, Nate Thurmond, Wilt Chamberlain; every day people, and hustlers of the day, all meshed in the swinging spot, AND great jazz that included singer Carmen McRae – a spot NEVER to be forgotten; owner H. Warren still kicking, now living in L.A.

ONE day there WILL be a HALFNOTE REUNION (there have been a few) this one, the 50th; hopefully, Jarreau and Duke will headline! Fans who loved the Halfnote; many still living today, some were out at Stern Grove – the likes of Award-winning photographer JIM DENNIS, a Halfnote bartender; Norman Brown – a man of Black consciousness – especially during the 60s; ALICE STALWORTH, lone waitress, still in the area;