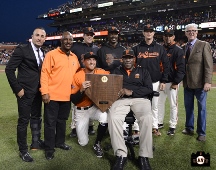 SEE YOU NEXT APRIL! Those were the words heard Sunday by many after the GIANTS exciting game defeating the San Diego Padres, 7-6, in the weekend series at AT&T Park, the final regular season of the defending World Series Champions. No Wild Card, no play-off drama this year! The fellows are traveling to their respective homes after a struggling season of highs and lows, BUT loyal fans cheered them on!

GOOD NEWS! SURPRISED when it was announced over the weekend, The GIANTS signed outfielder HUNTER PENCE to a five year contract through 2018, for 90-Million!!! WOW! SIGNED, SEALED AND DELIVERED!!!

Giants club Senior Vice President and General Manager BRIAN SABEAN announced the deal that would ensure that Hunter remained a Giant beyond this season was a top priority for the organization. “He was an integral part in helping us win the World Series last season and he provides our club with great veteran presence, both on the field and in the clubhouse, with just all the energy and passion he brings to the field everyday.” HE’S AWESOME!

Giants CEO LARRY BAER, stated the organization wanted to keep Hunter in a Giants uniform. “Hunter is a dynamic player that plays all out, all the time and who has already established himself as a fan favorite in his short time here. I’m excited to see him in a Giants uniform for the next five years.”

A media Advisory Press Conference was called Sunday morning to announce that the Giants and Pence had agreed to terms on a five year deal, attended by Pence, Manager BRUCE BOCHY, President and Chief Executive Officer Larry Baer, and Vice President and Assistant General Manager BOBBY EVANS ( HEARD through media sources, GM SABEAN was in Cuba, in hopes of signing a sought after player). Arrived late, missed Pence, but did chat with Baer reference former Giants Relief Pitcher – the bearded one – BRIAN WILSON and his BLING (seen at the end of the Dodger game standing in front of Baer’s seating, asking where was his World Series Ring). BOTTOM LINE – he was given his BLING that same evening!

Pence enjoyed a weekend he will always remember. Voted by players, fans, coaches and Giant ICON, WILLIE McCOVEY, honored with the “WILLIE MAC Award” presented to the most inspirational player on the team! In ceremony Friday night, prior to the first pitch, McCovey commented when presenting Pence the award, “he’s SPECIAL” – hoped he would return next season. In a stirring speech, Pence humbly accepted the prestigious award (last year won by Buster Posey).

Well deserved. A reverting force on the team, one to be admired! AND wanted to PLAY every game! ‘IRON MAN” NEVER missed – started 170-consecutive games, which is the longest streak in the national League ! Set a GIANTS record – started everyone of the Giants’ 162 games! FIRST player in the SF-era since 1958.

As mentioned, Giants won 7-6, in what looked like they would lose, but rallied in the 9th! PENCE, with players on bases, hit a RBI walk off, to win the final game of the season.

Bochy has praised Pence as a MANAGER’S DREAM! Acquired by the Giants from the Phillies at the trade deadline last season in exchange for Nate Schierholtz, minor league catcher Tommy Joseph and major league right-handed pitcher Seth Rosin . In just 59 games with the Giants last season he drove in 45 runs and helped sparked the Giants to their second World Series title in the last three season.

HUNTER PENCE has found a home here in San Francisco!

The 49ers ARE BACK ON TRACK! Thursday night game (NFL channel), BLEW the RAMS, 35-11, looking forward to trouncing Houston Texans Sunday at the ‘’stick! STAR running back FRANK GORE UNLEASHED – lead the NINERS running game and a WIN! Gore said the 49ers are all about winning! DO IT AGAIN SUNDAY!

HEY, IT’S NICE TO BE NICE AND TO ALL OF YOU OUT THERE…LOOK FOR ME…I’LL BE THERE….
E-mail Rochelle at iheard@earthlink.net