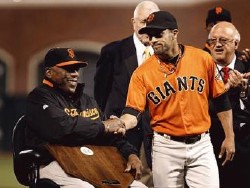 HOW SWEET IT IS! San Francisco GIANTS SHUT DOWN the San Diego Padres 3-0 to win the National League West Championship, for the FIRST time since 2003! I WAS THERE – instinct told me they would win Sunday. The Padres defeated them Friday and Saturday! Cool lefty, starter JONATHAN SANCHEZ knew it was his game to WIN! Solid throws across the plate, and at bat hit a TRIPLE play to ignite a two run rally; players FREDDY SANCHEZ, AUBREY HUFF, and young phenomenal rookie catcher BUSTER POSEY’s solo homer sealed the day! Giants STAR closer, right hand pitcher BRIAN WILSON DID HIS THANG’ – silenced the stunned Padres! Jonathan Sanchez notched a win!

AT&T Park erupted – sellout crowd of 42,822 fans waved orange rally towels, roars heard across McCovey Cove and SOMA! Posey ran from behind home plate to cheerfully embrace Wilson at the mound! Players cleared the DUGOUT, ran on the field in celebration! Tears welled in my eyes of happiness, for the fellows struggled all year! Champagne uncorked in the clubhouse and locker room – LET THE CELEBRATION BEGIN!

A lot can be said of General Manager BRIAN SABEAN and Manager BRUCE BOCHY for the turnaround this season. At the end of the last game in 2009, it was doubtful the two would retain their jobs, but Giants owners showed faith in the two, extended their contract for two more years! VINDICATED!!!

The 2010 season has been dramatic for the young GIANTS (with a few seasoned players); many critics were saying they could NOT reach playoff status! GM Sabean signed pitchers (players as well) to add to the roster – TIM LINCECUM and MATT CAIN had been the POSTER kids. A combination of strong starting lineup -Sanchez, BARRY ZITO, young confident MADISON BUMGARNER and great bullpen, lead by Wilson and players like the young rookie Posey called up from one of the Giants minor league, provided the spark needed to boost the teams hitting spirit – YES, WE CAN!!! BELIEVE!

There were no particular stars, they played as a team (before his departure, BARRY BONDS was the star and the ELEPHANT in the room), focused, equally skilled players who hustled, scratched, clawed, enthusiastic! Bochy instilled in them the will to win! Prior to coming to the Giants in October 2006, Bochy managed the San Diego Padres for 10 years; within that time took the team to four playoff games. Former Giants manager FELIPE ALOU took the team to first play-off in 2003! He was there Sunday, shared with me he was jet-lagged after the 6 hour flight, energized over the win!!!

The young Giants got HEART!!! Outfielder 32-year-old ANDRES TORRES for one! In his second season with the Giants, Torres can play all outfield positions, had a. breakout 2010 campaign at Major League level, setting career highs in nearly every offensive category. September Torres was sidelined with an appendicts operation that would seem to keep him out of the final drive to get in the playoffs or wild card. The guy had been hustling all season. Languishing in the minor leagues for years, FINALLY a dream come true! Such a contributor, miraculously, after 3 weeks, back in everyday play!

Last Friday night during pre-game ceremony, Torres was selected 2010 “WILLIE MAC” Award Winner! WILLIE McCOVEY presented Torres the honor. Engraved on the plaque are the words “Competitive Spirit, Ability and Leaderships” to characterize the qualities both McCovey and Torres exemplify. Pitcher Matt Cain 2009 recipient. The “Willie McCovey Award” is an annual honor bestowed upon the most inspirational player on the team, as voted upon by Giants players, coaches and training staff.

The Award was established in 1980, in honor of former legend and Hall-of-Famer WILLIE McCOVEY. Briefly chatted with Torres prior to Sunday’s game – definitely a happy man – eyes bright , eager. Also words with Bochy who was in good mood; players seemed relaxed in locker room – ready to go!