“I Heard That” — Greetings from Lubbock, Texas 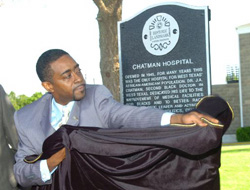 I HEARD THAT SF JUNETEENTH weekend Celebration went off very well in Civic Center! Missed the action! June 19th, the official date Juneteenth is celebrated in Texas, a tradition that followed the reading of the Emancipation Proclamation to slaves in Texas by General Gordon Granger, June 19, 1865, in Galveston, Texas, stating the good news they were free! And after 141 years, in many Cities.

So happen June 19 I left town via Southwest Airlines for Lubbock, Texas to visit my son Jay Metcalfe for a few days, and where I had the opportunity to take in Juneteenth Texas style. There was a week long celebration that culminated on June 21 at Simpson Community Center Parkway in the Black neighborhood. The 29th Annual Lubbock Emancipation Juneteenth Parade began 10a.m. started from United Supermarket (a big chain) that saw riders on horses, floats, in cars; many young people participated in the proud event, coordinated by the Parkway Cherry Point Neighborhood Association’s Senior Citizens Committee lead by President Tina Betts.

Surprised Jay had never made the event, time spent on the south side of Texas, not too familiar with what was happening on the east side of town, where most Black folks live and socialize. He thoroughly enjoyed the activities, promised himself he would never miss the event again! Found it peaceful from the urban cement of San Francisco. The scene reminded how back in 1865, freed slaves celebrated in joyous activities.

The beautiful vast rolling green meadow, a lake streaming in the middle, overflowed with beautiful Black folks – smells of barbecue Brisket Beef served FREE with baked beans and other side dishes. We strolled the grounds, listened to the sounds of a live Gospel rap group; talked to a few down home folks … shouted out the name OBAMA, preachin’ who would have thought here in 2008, a Black man stand on the verge of becoming our next president! They cheered, one young woman hollered – yea, right on Sistuh’! Felt good to be in the gathering despite the hot sun!

Jay was born in San Francisco weeks after President John F. Kennedy was killed; never expected he would settle in West Texas; originally located there to work in the oil fields of Levelland with relatives; ended up in Lubbock, the heart of West Texas, known for its state of the art medical facilities. Now he’s suggesting perhaps I could move there. I don’t know about that for I’m a City Girl … life’s a little slow for what I like to do!

Through the years I have traveled to various cities in Texas but my first visit to Lubbock. Jay burned up some gas, precious these days, driving his SUV to show me around the flat land that included the Black neighborhood, malls, park lands, to Big Red – Texas Tech University and Texas Tech University Health Sciences Center – beautiful area. He’s proud of his responsibilities at UMC Health System.

Lubbock is famously known for the home of legendary Rock and Roll star Buddy Holly who was born in 1936. His life was short lived, died February 3, 1959 at the age of 22 in Iowa plane crash. Today his memory lives on in the Hub City as Lubbock is called. Each year fans flock to his gravesite over 40 years after his untimely death. There’s a Buddy Holly Center located in the historic Depot Entertainment district that showcases unique Holly memorabilia. An annual festival pay tribute to Holly and his music, as well as other West Texan musicians that include Lubbock’s own Mac Davis, Waylon Jennings, Tanya Tucker, and Bob Wills. In 1999, the Texas State Legislature designated Lubbock as the music crossroads of Texas.

Spoiled by San Francisco weather, it was 100 degrees at 5 p.m. when landing at Preston Smith International Airport; several hours later while eating a wholesome meal at the popular Golden Corral Restaurant (Chef grilled huge steaks on open grill, plenty onions – COWBOY heaven!), Within seconds a severe Thunderstorm, spectacular light show, Golf ball size hail pounded the roof top. The only weather experience while there in Lubbock, for temperatures cooled down to the 90’s. Still hot!

These days hard to find a Soul Food Restaurant in the City – FINALLY the opportunity to enjoy some down home good eatin’ soul food – best I’ve had in years, at Chatman Hill Soul Food Restaurant (tender smothered steak, drenched in brown gravy and onions, fresh black-eyed peas with Okra (disappointed they ran out of Candied Sweet Potatoes and Macaroni) and Chess Pie (learned how to bake Chess Pie for my ex-husband, a Texan). The eatery located in a small commercial mall in eastern part of the city, known as the Chatman Hill Neighborhood. Enjoyed the visit and conversation with owner Robert Domingo.

Indeed a soulful Sunday in the ‘hood named after the distinguished Dr. J. A. Chatman, a Black man who built the historic two-story Chatman Clinic, the FIRST all-Black hospital in West Texas which he operated until his death in 1967, and still standing in the center of the community. Briefly, Dr. Chatman arrived in Lubbock in 1939, the only African-American physician in the City. He began his practice in his home, but in 1945, at a cost of $35,000, he completed construction of the clinic, that still stands in good condition. Jay was impressed, took several pictures.

According to former Lubbock Council member T. J. Patterson, co-publisher Southwest Digest Weekly Black Newspaper member NNPA), Lubbock and Chatman were featured in a 1945 Ebony Magazine story. Patterson shared this insight with me via phone upon my return home. During my visit, did not have the chance to stop by his office also in Chatman Hill. He served on the Council for 20 years. Currently reelected Honorable Floyd (forgot last name) serve on the Board and lone Black official. Curious, Patterson informed Blacks make up 8.5% of the population in Lubbock – 22,000 (Hispanic 30.0%), and not politically aggressive unless motivated by an issue or incident! Mr. Patterson, a warm straight from the hip likable gentleman, reminded me a lot of the late legendary Sun Reporter Newspaper columnist Tom Fleming.

Check it out – before departing, while eating breakfast in an SFO restaurant (Southwest Airlines Terminal) , who should come my way flashing a handsome smile, but foxy Dwayne Jones, Director Communities of Opportunity (COO) based in the City – definitely an eye-opener in casual wear, a hulk of a man! Jones was on his way to a conference in D.C. COO is an innovative partnership between residents, the City of San Francisco, and philanthropic organizations that is revitalizing the City’s struggling neighborhoods.; surprised to hear Nancy Smith’s voice calling “Give me that red and white car (my convertible) !!!” Somehow she always spot me on the streets of San Francisco, and there she was in the terminal on her way to Monroe, Louisiana!