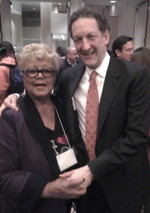 FEELS SO GOOD! Spring has sprung, baseball is back – GO GIANTS! Monday, uplifted in spirit when attending the Kick off 2012 Season Annual Play Ball Lunch presented by Blue Shield of California benefiting the Giants Community Fund. The entire 2012 Giants lineup, manager BRUCE BOCHY, Giants broadcasters, alumni and executives joined over 1,200 fans at the affair. AND one of the Giants key fundraising events that highlights Junior Giants, the Fund’s flagship program. Junior Giants players from various leagues were in attendance, and seated with a Giants player or coach.

The luncheon, held in the elegant Grand Ballroom of the Hilton San Francisco, started at 11 a.m., in a reception with Giants players and coaches seated at several tables, greeted long lines of fans, shook hands, penned autographs, pumped up by cheers – GO GIANTS!

During the reception, maneuvered my way among the crowd to briefly say hello to a few players, among them, The BEARDED ONE – BRIAN WILSON, sporting a tomahawk hair style, dressed fashionably in a suit … nearby, pitcher SERGIO ROMO, also bearded (they looked almost like twins) … handsome infielder EMMANUAL BURRISS – hey, my brother, loved your symmetrical braided hairstyle!

GIANTS President and CEO LARRY BAER announced the news as he took the mike at the start of lunch, received with a roar of relief! GOSH, it would have been disastrous to let the heralded pitcher, two-time All-Star and San Francisco’s LONGEST tenured Giant, play the season unsigned, then a free agent! Cain received a tremendous applause and standing ovation when he walked in the ballroom with one of the Junior Giants (as did each player and coach).

During his spirited welcome, MAYOR ED LEE said horns were honking around City Hall for Cain! Hey, the Giants can’t afford to lose their work horse! The team left before the luncheon was over to get to AT&T Park in preparation for the PRESEASON game play that evening with the A’s, which the Giants won; last night Cain pitched.

Prior to lunch, chatted with President Baer and the opportunity to congratulate him on assuming full fledged responsibilities in running the team, taking over the helm from former CEO Bill Nuekom at the end of last year. Baer has been with the Giants in a leadership role since 1992. He helped lead the effort to construct the team’s ball park in China Basin.

Also conversed with JACK BAIR, GIANTS Senior Vice President and General Counsel , who shot the picture you see of Baer and myself. I first met VP Bair at the opening of AT&T Park … he was a dear friend to the late Sun Reporter columnist Tom Flemings.

During lunch, seated at the media table with several reporters, that included ERWIN HIGUEROS, Spanish broadcast, and columnist GLENN DICKEY, of the Examiner , and a chance to greet Giants hitting coach HENSLEY “BAM BAM” MEULENS, seated nearby.

The SAY HEY KID – WILLIE MAYS – received a standing ovation when introduced … OOPS, can’t forget my girl RENEL (BROOKS-MOON), Giants fabulous announcer on and off the field, as always, emceed the luncheon, which raised $400.000.

HEY, IT’S NICE TO BE NICE AND TO ALL OF YOU OUT THERE … LOOK FOR ME … I’ll be there …
E-mail Rochelle at iheard@earthlink.net