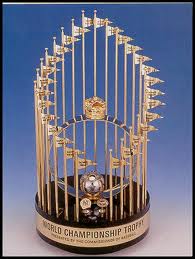 TGIF at AT&T Park! 2010 World Series Champion San Francisco GIANTS home opener versus The St. Louis Cardinals was OFF DA HOOK! 12 innings of DRAMA that ended when the GIANTS defeated the Cardinals 5-4, in what was nail biting suspense and thriller!

AFTER 56 YEARS, FINALLY the moment had come! Tears threatened during the pregame ceremonies, especially when the once called “rag tag” team entered on the field from center field gate to gather around the home plate mound. And the raising of the 2010 World Series Championship flag, carried by WILLIE MAYS, assistant to the President (played when the N.Y. GIANTS won the 1954 World Series), handed the folded flag to Manager BRUCE BOCHY, who in turn, passed down the line to each player, ended when Pitcher BRIAN WILSON ran across center field to a door on the far right side of the field, upstairs to the bleachers, climbed a ladder to hoist the flag high above others swaying in the wind – a beautiful sight and moment!

In the Press Room – greeted MARIA JACINTO, Senior Director, Broadcast Services ( she along with members of the Giants administrative staff were jetted to Houston for the Opening World Series game with the Texas Rangers – . CLASS organization); Always happy to chat with sportscaster BIP ROBERTS, writer MONTE POOLE, and news/sportscaster HARRISON CHASTANG, multi-tasking his various broadcast duties at radio station KPOO.

Before moving on – a SHOUT OUT to MUNI Spokesman PAUL ROSE! Called him early Friday morning to inquire about the T-THIRD MUNI train. GREAT RIDE! Usually I take BART, decided to drive over to the Bayview district , Yosemite and Third Street, parked my car at the popular Monte Carlo Restaurant and Bar, walked a block, hopped the Train to AT&T Park. Indeed a scenic ride through the main artery of 3-street. After the game, hung out at the Monte Carlo for a cocktail , conversation with ELLOISE PATTON, with United Food and Commercial Workers Union Local 5, and Chef ANDRE’S fried catfish!

Graham, tall ‘n’ handsome, mustache, strutted in white suit and red shirt, wide hat, surrounded by an entourage of musicians; one female vocalist who sung a tribute to the late legendary Ivory Queen of Soul – TEENA MARIE who passed in December 2010. .

The dance floor, void of tables and chairs, fans stood in front of the stage; one guy wore a full length white ERMINE Mink and hat (resemblance of the days when Graham performed with SLY and the FAMILY STONE, during an era that saw Super Fly fashions, big furs, natural AFROS, mini skirts). One time Larry walked the floor, plucking his bass guitar, stood on a chair, cell phone cameras flashed.

My music experience with Graham go back to the days when Larry performed in Oakland clubs, and hot funky action with Sly and The Family, BUT also with his mom, the late pianist DELL GRAHAM. Many a night would drive down to Burlingame and SALUTO’S (now defunct,) to listen to her and trio that included TIPPI on drums – wonderful happenings!

Larry and PRINCE have been hanging out. It was rumored Prince would stop in on the last set – learned that did not happen. Larry lives in Minneapolis, not too far from the Purple One (Prince). They’ve collaborated on a few CD projects. It was Graham, a Jehovah’s Witness, who is credited with converting Prince to the Faith.

Graham’s biggest hit, a crossover from his usual Funk flavor, popular ballad “One in a Million,” which he performed, much to the delight of many, included myself, slowing the pace, but back in high gear to conclude the first set, “Dance to the Music!” and “Thank you for Letting me be Myself!”

BACK Sunday for the wonderful Tribute to the late jazz trumpeter ALLEN SMITH (relate more next week). MACEO PARKER DEBUTS this Friday.