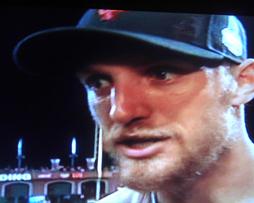 The 2012 World Series will be talked about for years – perhaps a film or documentary in the making, recapping the story of the scrappy resilient young Giants – a team of 25 determined players (that include right-fielder HUNTER PENCE – the club’s motivational Guru), who never gave up!

Sunday night, game four, Giants clinched the series! San Francisco fans went insane as they watched the big screen in front of City Hall! A shame some used the celebration to trash property; particularly in the Mission District! Hopefully, today’s celebration will be joyous, peaceful and respectful!

The Giants did us proud! Sunday night was a nail bitter, Tigers showed some attempt to rally, live another day, down 3 games, DO OR DIE! The “HORSE” – Giants starter MATT CAIN on the mound, determined to clench the series, pitched seven innings, game tied 3-3; chore taken up by relievers Jeremy Affeldt and Santiago Casilla, game tied until 10th inning, unraveled for the Tigers when second baseman Marco Scutaro drove in the winning run, scored by DH Ryan Theriot . Giants dugout went wild, score 4-3, last chance for the Tigers to hold on, take it to game 5, DO OR DIE!

Not to be, closer SERGIO ROMO dashed their hopes, struck out 3-powerful hitters – last pitch to MIGUEL CABRERA – Triple Crown winner! Romo wrapped it up – joy on the field! No tomorrow for the Tigers – they put up a good fight, but Giants a better one!

Glad the series was over because HURRICANE SANDY would have delayed the Giants return home, possibly prolonged the series! As I write this, the devastating hurricane struck the beach front of MY hometown of Asbury Park, N.J.!

Next Tuesday, PRESIDENT BARACK OBAMA has to hit a HOME RUN at the polls – win a second term! Now is NOT the time to put Republican challenger MITT ROMNEY in the White House! Vote your choice, but, I especially say to Black voters clear across the country, solidify behind President Obama in his bid – no one knows how Romney will operate once in the White House – minorities will suffer – a BIRD in hand is better than one in the bush!