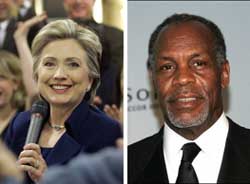 DREAM TEAM!!! What team? Sounds like a nightmare if one think Democratic Presidential candidates Barack Obama and Hillary Clinton could be running mates. Crazy! Give me a break! The nerve of Sistuh’ Hillary to suggest Obama be her running mate on the ticket – the audacity! Obama is leading in the popular vote and Delegates, and rightly set the record straight – no way! Hillary and Bill are desperate!

I was going to give her a few Props, but changed my mind! The feisty Senator forges ahead in her candidacy in hope of becoming the First woman to win the presidency and make history! Like many I don’t look forward to a nasty campaign, but the Clintons keep it up, now daughter Chelsea stumping for mom – is she still off limits to the news media??

Hillary survives because her popular husband is now working behind the scenes; voters should not be fooled … this is another way to get Bill a third term! When you vote for Hillary you’re voting for Bill!! Don’t believe she’s serious about Obama as her VP choice – just a ploy to win Mississippi Black voters!!!

Oh well, got away from it all for a lil’ relaxation. A rare trip to the movies last Thursday afternoon at the Sundance Kabuki Cinema, located on Post Street, off Fillmore, to see “The Honeydripper” – the story of the blues, gospel hymns and Negro Spirituals, filled with joy and pain, about a Black man’s (Pervis) struggle trying to survive and save his “Honeydripper” club from going under. The film directed by John Sayles, starring actor/activist Danny Glover, Charles Dutton, blues man KEB’MO and fine cast. The comic drama set in the 50s, Alabama and the beginning surge of Rock ‘n’ Roll. It’s deep!

A time in history of the desegregation of the armed forces in 1947, and desegregation of the federal workforce in 1948; But still not free, as depicted in the film – slave labor – Black field hands picking cotton; the man holding a rifle to keep workers in check; unfair laws, silly, against the Black man looking for a job, accused of loitering, false arrest. The film also showed good news, joy, rhythm, dancin’, having good times, dressed to the Nines!

Intrigued acting by Keb’Mo as Possum playing the guitar, portraying a spirit (or omen) seen by Pervis (Danny Glover) who remind him of his dark past. February “Honeydripper” won Best Independent or Foreign Film at the NAACP Image Awards. A fine Black film directed Sayles who deserve his props, for there are so little substance work that come out of Hollywood depicting positive Black stories and images, that has some teeth – gut feelings. The music is rockin’!

Glover is a fine actor, at times lost in a lot of commercial films that are box office success, and the bread and butter that draw moviegoers who like action – violence. But Danny’s spirit is in serious drama, passionate, one especially touched me, “To Sleep With Anger” (1990).

Glover was born in San Francisco; often wrote about he and his family Carrie and James Glover, both of whom were postal workers and were active in the NAACP. Both parents are deceased. Remember the occasion at the Glover’s home when invited with a group after attended Athol Fugard’s play “Master Harold and The Boys,” that starred Danny and James Earl Jones, that received high acclaim; the affair at the home introduced me to Jones, and a joyous evening!

Sadly, weeks later tragedy struck the family when Carrie, traveling with her son Rodney Glover, Sr., grandson Rodney, Jr. and a granddaughter, on their way to Carrie’s home town of Louisville, GA. She was driving at the time on a dark roadway in Grant, New Mexico , when involved in an automobile accident that took her life; all survived but Carrie who according to Rodney, Jr., did not have her seat belt on. Ironically, Miss Carrie took a stack of Sun Reporter Newspapers that featured my full page coverage (with photos) of the celebration at the Glover home.

A stave in the hearts of the Glover family. Danny and “Dad” as his father was called, carried on with difficulty; the two seemingly closer than ever. Tears still well up in Danny’s voice when mentioning her. I covered Dad’s 75th Birthday and memorial services. Occasionally would invite Jimmy to run with me; everyone in Hollywood knew Danny’s dad; several years ago at Kimball’s East during Lou Rawl’s engagement, told him Jimmy was in the audience, front row; Lou, involved with Budweiser Beer, in deep baritone, acknowledged his presence saying, before delving into a song, “Dad, This Bud’s for you!” That showed Class!

I’m from the old school, very selective in my moviegoing; they just don’t make good films like they use to. “Honeydripper” was well worth my time, and to pass on to you, the reader, Hurry to the Sundance!

How about some Soul Food – not Neo-Soul! Black Cuisine! Recently folks gathered to the 27th Annual Black Cuisine Celebration held annually at the San Francisco Bayview multipurpose Senior Center, to be exact Saturday March 1, located at Yosemite Street off Third. Several food booths – one Mama Kente saw lines 40 deep or more; therefore never was able to cop me some macaroni and cheese, oxtails, a pig foot, or other down home vittles! God knows my mouth watered for some Peach Cobbler!

Executive Director Dr. George Davis, since the 70s, came up with the fundraiser idea for Seniors to share their favorite recipes. Proceeds benefited services for senior. During hard times and slavery in the South, Soul Food was survival food! These days most folks watch their diet and observe healthy eating habits – less pork, cooks substitute turkey or other creative cooking ideas. From time to time one must have some Ham Hocks in collard or turnip greens, fried chicken, Chitlins (my fav) – you get my drift!

Owners Gary and Theresa DeRouen-Lynch of The Monte Carlo Restaurant and Bar, located across from the Center, added to the celebration; one could relax, have a cocktail; that day enjoyed Gary’s finger-lickin’ Barbecue Ribs! My man had his smoker setup in front of the club!

Dogleg Glenn, as I often call him, retired educator, in business almost 20 years, is the lone Black Golfsmith in the State (one who repairs golf clubs). In 1998 Glenn received one of Golf industry’s highest honors – GCA Club Master of the Year. In between repairing clubs for a diverse list of golfers, many have become close friends. Glenn, a family man, spends his days discussing the finer points of custom clubmaking and keep up with the trade, twice a year attend Club Makers Class in Austin, Texas.

Doing what I love to do – Hang out on the club scene. Last Friday night cocktails with friends Warren and Donna Smith-Stewart at 1300 on Fillmore joined by Charles Dixon and Charmaine Jackson. Suave Mr. Warren, man about town, lived to see the changes in the Fillmore. A knack for business, he was involved at the legendary Manor Plaza Hotel (1930 Fillmore) in a nightclub operated by Willie McCoy; rubbed elbows with the likes of comedian Flip Wilson, Dinah Washington and other celebrities of the day.

1300 is the spot to be seen! San Francisco‘s Hat Lady – Mrs. Ruth Dewson, who own an eye-stopping upper Pacific Heights Hat Boutique. The audacious lady had just returned from her hometown of Paris, Texas campaigning for Senator Barack Obama, back home in time to celebrate her birthday with a select group of friends this past Monday evening at Yoshi’s San Francisco;…Media folks like the scene – that evening Cheryl Hurd-Perry, TV-NBC11 Anchor;

Warm conversation enjoyed with the family of Matriarch Vera Robinson, her son Tollie Green (a contractor) and his daughter Tyesha Green…daughter Helen Robinson. The family were impressed with the legend wall in the lounge. Matriarch Robinson flashed a sweet smile when she recognized the late Wesley Johnson, Sr., sporting that big white Texas hat, recalled many a day she enjoyed partying at his Texas Playhouse when on Fillmore.