“I Heard That” — Fired Up About Obama-Biden! 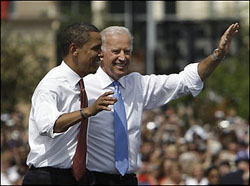 FIRED UP when Presumptive Democratic Presidential nominee Senator Barack Obama announced his selection of Senator JOE BIDEN of Delaware, as his Vice President running mate! His choice has energized many of us! Not surprised when I HEARD the news Saturday at 1 a.m. Smart decision! The Russia/Georgia conflict may have caused Obama to select Biden, a Washington INSIDER who has served in the Senate as Chairman of the Judiciary and Foreign Relations Committee.

Biden’s a tough, seasoned politician, and what Obama needs to fight presumptive Republican candidate JOHN McCAIN, respected War hero, negative rhetoric. Biden and McCain have been friends but when it comes to politics, GLOVES OFF!!

Biden literally rolled up his sleeves Saturday when standing by Obama in Springfield, ILL on the steps of the Lincoln State House where Obama first announced his candidacy to run for President, let loose, went into attack mode against McCain! Obama has to STAY COOL, for White voters, SOME fearful of giving this Black man the highest power in this country, definitely don’t want to see an ANGRY Black man take over the White House!

Earlier this year Biden ran as a presidential candidate in the primary (and in 1988), forced to quit the race, left his supporters with “I AIN’T GOING AWAY!!! “ Little did he know what was ahead!

Senator Obama is savvy enough to surround himself with a brilliant cast of experts who can help him run the country, understanding the BUCK STOPS WITH HIM! Whether one agree or disagree with his choice of Senator Biden, clear he will be an asset to help him solidify the voters who feel he is weak on foreign affairs, picked the right man to help him lead this country out of the mess the BUSH administration has gotten us in!

Biden will lock step with Obama Thursday night when the young senator will accept the party’s nomination and address the Democratic Convention laying out his plan to focus on bread and butter issues that affect the working man and woman and their families who are hurting in trying to survive the high cost of living; mortgages – you know what I mean! America will be listening ito what our next president will tell us about CHANGE!

AHHHH soon to be FIRST LADY, MICHELLE OBAMA’s Keynote address Monday night at the Democratic Convention in Denver was AWESOME! She made us proud. WISH my mother, grandmother and aunts could have lived to see this UNBELIEVABLE AND HISTORIC day, unthought of even a year ago, to see this beautiful SISTUH’ – an ESSENCE WOMAN, confident, articulate, fiery, telling the world why we should vote for her husband “the man I love ” BARACK OBAMA!

The Senator’s wife, whom he calls “MY CHIEF COUNSEL AND ADVISER” – the woman in his corner who gives him strength; mother of his two cute smart young girls Malia and Sasha who joined mom on stage after completing her speech (touching when they spoke to Obama who appeared on video screen live from Kansas City, one said “Hi Daddy”) COME JANUARY the OBAMAS will be the NEW FIRST FAMILY IN THE WHITE HOUSE…FINALLY getting some COLOR!!!

SHOCKED when the news came across the airways GENE UPSHAW, National Football League Players Association Union head, had PASSED 3-days after diagnosed with Pancreatic Cancer! According to news report he died last Wednesday night at his home in Lake Tahoe.

I did not know Upshaw personally but knowledgeable of his prowess on the football field during those wonderful days of the OAKLAND RAIDERS, and a man who went on to head the NFLPA, well-respected by all; especially team owners. His passing a great loss to the Players whom he fought to help get NFL players free agency and the riches that came with it!

Read comments offered by close friend ART SHELL , Raider team mate, and in 1989 became the FIRST Black coach of the modern era when he took over the Raiders. “Gene was a true pioneer as one of the few African-American LEADERS OF A MAJOR UNION.” Shell said. “He made the league a better place for all players. Playing alongside of Gene was an honor and a privilege. He was a pillar of strength and leadership for our great Raider teams!”

GOOD NEWS!!! LORRAINE HANSBERRY Theatre (LHT) has found a NEW home to present Holiday Gospel Music and other works for the 2008-2009 28th Season! Before the Press Release could cool off in my hand – LHT’S Artistic Director STANLEY WILLIAMS was on my phone “Please spread the word!” Of course!

Much drama earlier this year with the thought 2007-2008 would be the last season after their home for more than 20 years at 620 Sutter Street in San Francisco’s downtown theatre district threatened when The ACADEMY OF ART UNIVERSITY acquired the building and wanted the company out!!! June 2008 lost its home!

After many meetings at the San Francisco Board of Supervisors for help and cries to the community, doomed to find another spot!!! Much to the joy of LHT Founders Williams and Executive Director QUENTIN EASTER, PG&E came to their rescue! PG&E has partnered with LHT to present two of the plays in its 2008-2009 Season. LHT’S annual Holiday extravaganza, BLACK NATIVITY: A Gospel Celebration of Christmas, and Sacramento playwright WILLIAM PARKER’S comedy/drama “WAITIN’ 2 END HELL ” will both be presented at PG&E Auditorium at 77 Beale Street in San Francisco’s financial district.

“PG&E is very pleased to provide our auditorium to support them during this challenging time, “ said Nancy McFadden. “We are committed to helping the theatre achieve its mission as one of the leading African American Arts organizations in the region. We are confident that the Lorraine Hansberry Theatre will have a successful season and PG&E is happy to be a small part of that success.”

This isn’t the first time that PG&E’s auditorium has been used for the production of live theatre. PG&E opened its doors to the American Conservatory Theater (A.C.T.) in the aftermath of the 1989 Loma Prieta earthquake which severely damaged the Geary Theatre.

During this period of transition, Williams and Easter continue to search for a new home. This “PASSPORT” season will take place in a variety of venues in an historic partnership with the leading theaters and arts organizations in the region, including Theatre Works in Mountainview, the San Francisco Playhouse, Berkeley Repertory Theatre, and the San Francisco Opera House! A negative has turned into a positive, for the traveling Theatre will introduce those who may have never enjoyed the artistic works of Stanley Williams!

MAKING THE ROUNDS – Last FRIDAY afternoon took a leisure stroll on Bayview Hunters Point THIRD STREET – herein after referred as 3-STREET. SAM JORDAN’S – the house the late SAM AND RUTH JORDAN built (both deceased). The legendary club and restaurant continue operation under the Jordan siblings who have modernized the interior.
Son ALLEN operates the kitchen – large Prawns were SCREEEEAMIN’ (packed a care package home!)…a different generation frequent the spot…a few old timers STILL come by like MR. CHARLIE GENERETT an ORIGINAL Sam Jordan customer since the club opened in the 50s, who look forward to his daily sip and to be in DA MIX!

STOPPED in AUNTIE APRIL, NEW Soul Food restaurant (former Mexican Restaurant) located across the street from NEW, yet to be occupied, SENIOR homes built by Providence Baptist Church, REV. CALVIN JONES, Jr. I’m told waiting for final inspection! What BOTHERED me HEARD THAT 95% to be Asian occupied, not that I have anything against Asians, BUT Bayview STILL a BLACK community with many Seniors who did not for whatever reason get the word about the LOTTERY, or perhaps did not qualify!

One of 3-street club personalities MR. ALVA COSEY, owner of the bar and Restaurant COSEY once located within walking distance of Sam Jordan’s, PASSED August 21 at U.C. Hospital in the City. Many a day wrote about the gentleman! My sincere condolence go out to his brother TOMMIE BYNUM and the Cosey family.