“I Heard That”: Concerts at the Cadillac Hotel

by Rochelle Metcalfe on September 9, 2009 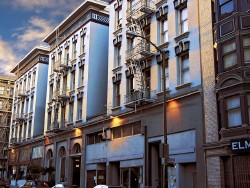 Despite negatives written about the San Francisco TENDERLOIN District, there are POSITIVE news happening in San Francisco Supervisor CHRIS DALY’s District, noted for world renowned GLIDE Methodist Memorial Church; The TENDERLOIN HOUSING CLINIC founded by Attorney RANDY SHAW, located in the heart of the district on Hyde Street a block from the site of Turk and Hyde where the LEGENDARY BLACK HAWK JAZZ CLUB (now a cluttered fenced in lot) featured great artists like MILES DAVIS, DAVE BRUBECK, JIMMY SMITH, DINAH WASHINGTON, to name a few!

GOOD NEWS! LIVE MUSIC occasionally featured on Fridays during the noon hours at THE CADILLAC HOTEL, 380 Eddy Street at Leavenworth, known as “THE HOUSE OF WELCOME.” And a LANDMARK! The hotel is a REMARKABLE STORY! Once a GRAND building designed by Frederick H. Meyer in 1907, fell on hard times many years later.

My experience in the 1950s, remember the Uptown District flourished with entertainment – nightclubs like the After Hour spot, “STREETS OF PARIS” before GENTRIFICATION and DISPLACEMENT of residents, and big corporate hotels started building. Poverty, drugs, pimps, crime, liquor stores the new landscape!

The man I call THE GODFATHER – LEROY LOOPER – a worldly PROUD BLACK man, now in his 80s, but remembered in the hearts of many – DA MAN who helped provide a safe place; residents call the four-story seemingly block long building “home.” So much more about DA MAN and the Cadillac Hotel (read Randy Shaw’s February 26, 2007 piece in BeyondChron). And Looper’s 1977 autobiography featured in BeyondChron archive, in his own words a man whose survived the ups and downs in his STREET GAME – drugs, prison; lived with ALL types of people – a STREET FIGHTER and SURVIVOR whose life changed with the death of President Kennedy and Martin Luther King’s DREAM!

GO WEST, YOUNG MAN! Born in Philadelphia in 1924, raised in Washington D.C. moved to New York and Harlem; life changes brought him to San Francisco where he set up REALITY HOUSE WEST, centered in the Fillmore PRE-redevelopment 1970s, worked with drug abusers. Met his wife Kathy, a college student and volunteer at Reality who believed in his work, the woman who has stood by his side through thick and thin; they bought the Cadillac Hotel in 1977, and laid the FOUNDATION for the TENDERLOIN’s POSITIVE FUTURE!

NO STRANGER to the Loopers, met the couple in the late 1970s when invited as part of the media to cover the opening of the FIRST SIZZLER Restaurant in San Francisco, located on the ground floor of the hotel. A GREAT DAY that saw politicians, community folks herald the day by their presence at the ribbon cutting ceremony! Sizzler exposed Tenderloin habitants especially to a full fledge restaurant! Closed after several years. Always admired the Loopers for their good works, followed them through the years.

MOVING FORWARD!!! BACK ON TRACK! CONCERTS at the Cadillac, in the lobby, the aspiration of KATHY LOOPER, with support of her dynamic husband who loves music, BOOK artists who are willing to come and play FOR FREE, but receive a video of their performance, AND GIVE CHEER TO THOSE WHO COME TO HEAR MUSIC!

HAPPY to learn about the FRIDAY CONCERTS when running into Kathy earlier this year in Stonestown Mall. FINALLY, after several months, SURPRISED Kathy and LeRoy when I walked in the last Friday in August! Kathy operated the camera, assisted by the Looper’s handsome son CAMLO (Gypsy name after a Hindu God meaning BEAUTIFUL BLACK GOD OF LOVE!).

The Friday of my visit was HOT, found parking within distance of the Hotel, walked among those out on the street holding various conversations; one gentleman was trying to sell a lamp – seemingly in good condition, but needed money before the first! BROTHER CAN YOU SPARE A DIME worth nothing these days! LIFE AIN’T EASY DOWN THERE! Community activists like ATTORNEY PAUL HOGARTH, Managing Editor of BeyondChron, steady on the front line fighting for CHANGE – A BETTER LIFE for those families, and seniors who live in the community!