“I Heard That”: Concert at the Cadillac; Political Fundraiser at the Page; Jackie Payne at Stanbdy Bar … 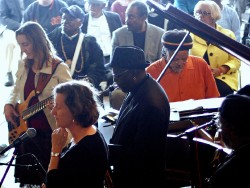 MAKING THE ROUNDS doing what I like to do, listen to “LIVE” music! TGIF noon action in the TENDERLOIN section of the City, pattin’ my feet at the CADILLAC Hotel to some righteous JAZZ, lil’ Blues and Funk with fellows absent from my radar screen for some time!

The UNIDENTIFIED FLYING QUINTET (UFQ) special Friday concert in the spacious lobby of the landmark hotel. The Quintet included two musicians – SAM PEOPLES (played magnificently on the prestigious Patricia Walkup Memorial piano) and CHARLES UNGER on Sax (the two performed at Storyville and Margo’s, two popular clubs in the City, both bit the dust!); Runding out the group, lady ARIANE CAP on bass, vocalist JUDY B, and BeyondChron’s ERIC “DOC” SMITH on The Zendrum.

“Concerts at the Cadillac” is a monthly series of free Friday noontime recitals at 380 Eddy Street @ Leavenworth. Sponsored by North of Market/Tenderloin Community Benefit District, ELAINE ZAMORA, Executive Director, was on the scene. I might note she is a District 6 Supervisor Candidate ( Chris Daly TERMED OUT). The concerts are the pride and joy of KATHY and LeROY LOOPER, owners of the hotel, well-respected in the Tenderloin for their good works in helping others. Kathy videos the live action, while LeRoy, greeted by many, relaxes and reminisces.

Thrilled over the rhythmic hour of swinging sounds; especially the collaborative take on Herbie Hancock’s “Watermelon Man” the most rousing piece of the set – Peoples fingers flowed Hancock style – he’s BRILLIANT! Among music lovers enjoying the performance, were: MAURICE JAMES, Executive Director Morrisania West, and a member of the Cadillac Board; savvy WARREN STEWART; Tenderloin community activist, MR. SKIP (until earlier that week, I had not seen him in years).

After the set cornered DOC to learn more about the Zendrum, beautiful black instrument strapped on his shoulder, programmed to emit DRUM sounds from laptop computer, quite complex (my thought) for during the entire set wondered where the drum sound was coming from – Doc was KICKIN’ out the beat ! AND the creative gent is the INVENTOR of the drumstick – you must check it out!

Doc, an ENVIRONMENTAL ACTIVIST, new on my radar screen; met him earlier this year at an event at Sam Jordan’s Club on 3-street; he’s among the many District 10 Supervisor Candidates! Definitely a lot of ENVIRONMENTAL ISSUES in the Bayview! Doc’s planning a few fundraisers around the music. HEY, GO FORTH MY BROTHER!!!

After the concert, SKIP invited me to join him for late lunch at MEE MEE’S Restaurant (not sure of the exact spelling), about two blocks from the Cadillac … food was good, NO Chinese food on the menu, clean. Opportunity to catch up with Skip on the happenings. Back in the day would see him at two popular clubs on Haight Street and Stanyan (Anxious Asp and Sugar Hill – both bit the dust years ago). Skip resides in the Tenderloin, involved in community activities to improve the area; especially for children and families, and their safety. There are POSITIVE changes planned for the Tenderloin.

When returning to my car, delighted to see another face off my radar screen for years – MARK SIMON, son of San Francisco famed club owner Bunnie Simon.

WHAT REALLY FLOORED ME – ROBERT LAW, the man known on the street club scene as “LAW MAN” is Ms. Smith’s 2010 CAMPAIGN AMBASSADOR, and hosted the event! Didn’t know he was interested in politics! LAW MAN DO YOUR THANG’! Fun to hook up with Lionel, MS. BELO, RUDY SMITH, PHIL and MR. SKIP.

MOVING ON down to SOUTH San Francisco and the STANDBY CLUB on Airport Blvd., owned by A GUY NAME JOE! POURING down raining Sunday afternoon of April 11. Drove down to join radio station KPOO WEDNESDAY morning BLUES JOCK NOEL HAYES (hang out with him for a few minutes (11.30 a.m.) rapping about Entertainment/community news. Also making the scene, members of the Golden Gate Blues Society, President DOROTHY HILL and DEB LUBIN; striking EVANGELINE who loves to dance solo!

What a funky rainy afternoon to enjoy barbecue, the pretty smile of mixologist MS. ROSIE, and BLUES WAILER JACKIE PAYNE and the bluesy STEVE EDMONSON Band with my favorite saxman SWEET MEAT – CARL GREEN blowing soul; BILL SINGLETARY on bass, NICK OTISON, on drums. EDMUNSON laid some bad licks on his bass guitar. JACKIE always touch my blues spot when doing “I’ll Drink Your Bath Water Baby” (ANYTIME my brother!) leaned on the cut in spicy dialogue for some time. Safe to say many in the room were EXPOSED to Payne for the first time! Hey Joe, bring Mr. Payne and Posse back!

TALKIN’ SPORTS – GOOD NEWS! Last week the GIANTS TRADED FRED LEWIS TO TORONTO BLUE JAYS! The 29-year-old outfielder’s contract was up at the end of 2009, and on the trading block. Wrote often about Lewis, last column dated September 30, 2009. The season was not a good fit for Lewis; hopefully a new organization will give him a FRESH new start!

Lewis has great potential! Made a splash in May 2007, when the ROOKIE was called up from the GIANTS Minor League, STUNNED the sports world and fans when he hit his FIRST big league home run as part of a grand cycle! Became known as “THE SLAMMIN’ ROOKIE”!

ON A SAD NOTE – A GREAT LADY, DOROTHY I. HEIGHT, a founding matriarch of the Civil Rights movement, passed early Tuesday morning at 3:41 a.m., at Howard University Hospital, she was 98. Ms. Height lived a purpose driven life; a graceful QUEEN who wore those beautiful hats!