“I Heard That”: Comeback Kid Jonathan Sanchez Pitches a No-Hitter! 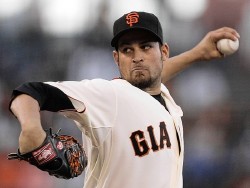 CONGRATULATIONS to Giants’ pitcher JONATHAN SANCHEZ on his spectacular NO HITTER last Friday night at AT&T Park, shutting out the San Diego Padres 8-0! HAPPY I was home that evening to watch the southpaw’s COMEBACK after being DEMOTED from 5th rotation to the Bull Pen for 3-weeks or so to improve his pitching skills or back to the Fresno team! Sanchez signed with the Giants in 2004 through 2009.

Sanchez returned with a VENGEANCE, DETERMINED to regain his position AND RESPECT! As luck, or destiny would have it, called back to rotation because 303 game winner RANDY JOHNSON went on the disabled list last week with a shoulder injury. The 26-year old Sanchez performance was phenomenal; became clear in the 7th inning he was on to something, momentum mounted when it looked like he would make it to the last pitch!

JUMPED FOR JOY when he DID IT!!! HEARTRENDING to see Sanchez Dad SIRGFREDO SANCHEZ in the stands rooting for his son; the two embraced – WHAT A PROUD MOMENT FOR BOTH FATHER AND SON! Jonathan said the night was a GIFT to his Dad, and he would be hanging out with him after the MEDIA HOOPLA! POP flew here from Puerto Rico to be there! When the camera panned him, you saw his excitement after each inning and drama on his face! Had to be nerve racking!

I’ve been absent from “DA YARD” since OPENING DAY, a DIEHARD GIANTS FAN, MESMERIZED over the starting pitchers, intensely watched TV games just to OBSERVE THEM!!! Cy Young pitcher TIM LINCECUM DA BOMB! … On pins and needles until the BIG UNIT – Left-handed pitcher RANDY JOHNSON FINALLY got his 300th WIN – WHAT DRAMA!; PULLED for ZITO to GET HIS GAME TOGETHER, this year much improved …

MATT CAIN suffered injuries last year, BACK THIS SEASON READY TO ROLL, proved HE’S GOT IT, a FINE PITCHER! Disappointed he could not pitch in the All-Star game due to injury in Saturday’s game, 2nd inning, when he sustained a hit on his right elbow/arm pitching side.

Plans were Cain and Lincecum would take the same flight Sunday after the game to St. Louis ( Lincecum THREW OUT THE FIRST PITCH for the NL! ). As of this writing, learned Cain would be there as a spectator! The TWO YOUNG PITCHERS are THE FUTURE of the GIANTS!

THE KUNG FU PANDA – PABLO SANDOVAL’s POWERFUL BAT and WHIMSICAL PERSONALITY keep things stirred up! He has added a lot to the team’s spirit, and fans who were disappointed he didn’t make the ALL-STAR Game. Undaunted, Sandoval continued to play his heart out – HAPPY to be on the field everyday!

This sports fan has been a CHEERLEADER for GIANTS left fielder FRED LEWIS (BARRY BONDS’ replacement) since Mother’s Day weekend of May 2007, a ROOKIE called up from Giants TRIPLE-A Fresno team, STUNNED the baseball world to become the 22nd player in Giants history, the FIRST ROOKIE to hit a pair of GRAND SLAMS in the same season!

I KEEP PULLING for the 28-year old NO LONGER in the lineup everyday in left field, down in hitting and performance. GIANTS MANAGEMENT had plans for Lewis to play a SIGNIFICANT ROLE on the 2009 team! This writer STILL BELIEVES he has potential!

It had been discussed by a sports analyst that the change in Lewis’ playing came when GIANTS MANAGER BRUCE BOUCHY assigned him to the STARTING position which can cause a lot of anxiety for a young ball player if he’s not ready – The responsibility to get on base, create the opportunity for a run believed too much pressure, thus his game started to suffer!

Lewis left camp near the end of the 2008 season in September to UNDERGO a BUNION OPERATION, BACK IN SPRING TRAINING, FIRED UP! Hopefully he will regain his confidence and game! I fear LEWIS may have to return to the Fresno team to RECHARGE!

Since June, the team seem to have come to together, hustling to win. HOPEFULLY the ALL-STAR BREAK won’t break their momentum! JUST WIN … KEEP ON WINNING TO CHAMPIONSHIP PLAY – MAYBE THE WORLD SERIES!