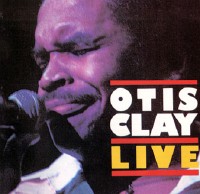 The Amigos travel cross country to BLUES FESTIVALS, and friends with Clay who reside in Chicago, and acknowledged their presence throughout the evening. The 2-night weekend engagement was Clay’s DEBUT to the San Francisco club, but played Oakland Yoshi’s about 11 years ago, AND a SUPERSTAR with soul fans in Japan where he’s performed many times; there were a few in the audience.

Caught the first show and my first time hearing CLAY LIVE! These days backed by an excellent band comprised of a few sidemen once part of the late TYRONE DAVIS band. Clay’s son on drums. THE Band set the pace with the funky piece entitled “Pass the Peas”. First show saw Clay trying to get the feel of the room, midway GOT IT!

A soul singer in the tradition of Solomon Burke, with Mississippi roots, born in WAXHAW, moved to Chicago as a youth , where his career took off as a gospel singer in the mid-60s. Handsome gentleman, tall, winning stage presence; warm smile puts you at ease, felt the tender lyrics, heartfelt, passionate, listening to “When Hearts Grow Cold,” “You’re the One I want to be with”. Expressed he’s a firm believer in being happy – delved into “Take Me To the River,” performed his Grammy Nominated song, dedicated to those that’s doing something in life “Walk a Mile in My Shoes,” soulful “Precious, Precious,” “Trying to Live My Life Without You,” concluded with Al Greens’ “Love and Happiness.” HEARD SECOND SHOW WAS HOT!

Clay, well respected in his community of Chicago’s West Side, helped in fundraising and development of the HAROLD WASHINGTON Cultural Center, named after the late Chicago mayor and congressman. IF in NEW ORLEANS later this month Clay will perform at the 8th Annual PONDEROSA STOMP, April 28 and 29 at the House of Blues in New Orleans.

STILL ON DA STREET – stopped in 1300 … there was Bayview businessman/community activist CHARLIE WALKER, always impeccably dressed, deep in conversation with his LOYAL POSSE!

WELCOME BACK JASON! In column dated January 21, expressed my disenchantment over Artistic Director BILL KUBECZKO announcement JAZZ would no longer be the MAIN focus of SF’s Yoshi’s lineup; plans to include other forms of music! My thoughts were YOSHI’S WOULD LOSE ITS WORLD RENOWN FLAVOR AS A JAZZ CLUB!!! MANAGEMENT WOKE UP!!! GOOD NEWS when I received E-MAIL notice last week JASON OLAINE IS BACK – BILL IS GONE! OLAINE hired as CLUB’S NEW ARTISTIC DIRECTOR – NOW YOU’RE TALKING KAZ KAJIMURA!!!

I’ve been covering Yoshi’s since the club was on CLAREMONT Avenue, North Berkeley, a time of great jazz lineups! Met Jason during this time when he was ARTISTIC DIRECTOR 1993-1999, DISAPPOINTED when he moved on to other endeavors. Owner KAZ statement “We’ve long wanted to bring Jason back into the fold, so when he became available we jumped at the opportunity! Yoshi’s GREW TREMENDOUSLY UNDER JASON’S WATCH. WE’RE VERY EXCITED TO HAVE HIM BACK ON-BOARD BOOKING YOSHI’S SF.” ME TOO!!!

EASTER SUNDAY over at BLISS BAR on 24th Street (between Noe and Castro ) to hang with world renowned versatile pianist LARRY VUKOVICH, promoter, Art of the Duo Series EVERY SUNDAY starting at 4:30 p.m. Easter featured guest SCAT MASTER vocalist KENNY WASHINGTON who has a range of more than four octaves – he’s AWESOME! The intimacy of Bliss perfect! AND He and VUKOVICH A perfect fit!

SADDEN by the news as I went to DEADLINE, THE REV. soulful Saxophonist RON STALLINGS, A BAY AREA AND BEYOND STELLAR musician passed Tuesday. My condolences to family members that include vocalist MARY STALLINGS. April 26 a scheduled TRIBUTE to Ron that will go on as planned in celebration of his contributions to the music, and help defray hospital cost incurred during his illness, at La PENA CULTURAL CENTER, BERKELEY. Info: (510) 849-2568.