by Rochelle Metcalfe on February 4, 2009 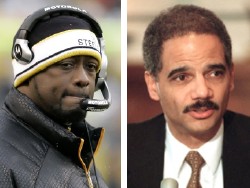 February celebrates BLACK HISTORY MONTH – a time to acknowledge the accomplishments of African Americans and our culture. We definitely have something to cheer about when holding programs throughout the month! 2009 has brought about CHANGE – BLACK IS IN! President BARACK OBAMA resides in the White House with his family, his election has given not only African Americans hope, BUT ALL AMERICANS!

A new dawn for the Republican Party! Last week elected MICHAEL STEELE, former Maryland Lieutenant Governor, as its FIRST BLACK Republican National Committee Chair! NOW THAT’S POWER AND HISTORY!!! The MAN is qualified!; ERIC HOLDER was sworn in yesterday to become the first black U.S. ATTORNEY GENERAL! Pittsburgh Steelers’ 36-year old head coach MICHAEL TOMLIN, youngest to win the SUPER BOWL, hired when he was 34! There was a time it was unthinkable to hire a black coach! The FIRST time in San Francisco 49ers history, MIKE SINGLETARY hired to lead the 2009 season!

YOUNG PEOPLE, KEEP YOUR EYES ON THE PRIZE! Qualified, hardworking black Americans CAN SUCCEED; prepare yourself to walk through the door when the opportunity presents itself! ALL things are possible! YOUNG PEOPLE GET AN EDUCATION – BROTHERS PULL YOUR PANTS UP!

SUPER BOWL SUNDAY watched the exciting game at the MONTE CARLO LOUNGE and Restaurant in San Francisco Bayview District. DA PLACE WAS PACKED!!! A lot of hoopla fun, split on who was rooting for whom. Owners GARY AND THERESA DEROUEN-LYNCH sportin’ black and yellow Steeler T-shirts – BIG BOSSMAN wore a wide Black hat (I wore my 49ers shirt).

During Half-time a MEAL FIT FOR A QUARTERBACK was served – delicious PRIME RIB dinner prepared by CHEF DAVID, stimulated us to hang during those dramatic moments of the last quarter – like many I wanted Coach MIKE TOMLIN (oh, he’s sooo fine!) and Steelers to win, drama when the Cardinals threatened, by then cringed in my seat – jumped for joy when it was over Steelers 27 – Cardinal 23!!!

DROPPING a few names of those on the scene – BERNARD and RUTH POOLE, MEL “COOKIE MAN” with wife and party; LIONEL HORNSBY and friends – R.H. and JANICE HILLIS…MS. BELLO (looked jazzy); ABBEY MALONE, JOAN DILL, MS. TERRIE (Monte Carlo Thursday night bartender);ULYSSES CRITTENDON ( LAST OF THE BIG TIME SPENDERS); SARITA BURR captured many of us in her camera – THANK you for the photo); CLARENCE BRYANT ( HEY FELLA’ noticed those snappy brown and white KICKS) and buddy AL COOK; ROSA LINDA ROBINSON concerned about her GIG at The Beach Chalet Visitors’ Center! San Francisco Recreation and Park Department is planning to eliminate the staffing of the Center due to budget constraints. STAY TUNED!;…

The HAT LADY – RUTH DEWSON surprised everyone when she stopped in ready to party, no seats, moved on to VELMA’S via CAB, where a SOULFUL Super Bowl party was going on! Ruth IN HOG HEAVEN, THRILLED to eat some PIG FEET and PIG TAILS!

FRIDAY NIGHT at the PARAMOUNT THEATER downtown OAKLAND, to catch the LABELLE REUNION TOUR – PATTI LABELLE, NONA HENDRYX AND SARAH DASH. overall a great evening, BUT not without some disappointment and discomfort on my part! BALCONY SEAT WAS LOUSY (NOT MY CHOICE – PRESS COMP WAS AN INSULT!!! DISAPPOINTED IN THE PUBLICIST WHO KNOW ME WELL!), spotlight flashing across the area, sound was bad (nothing new for the theater as there are problems) over excited ticket holders STANDING up, therefore blocking my view, forced to stand! PSSSST!

ACTOR DANNY GLOVER introduced the ladies, who kicked off the show singing “Mrs. Otis Regrets” backed by a terrific band! THE DIVAS performed non stop, no intermission! Nona and Sarah well-preserved; of course PATTI exciting as ever – the VOICE and highlight of the show! The singing of their big 70s hit “Lady Marmalade”( about a PROSTITUTE) brought back the DISCO CRAZE – they were wild back in the day – OUTRAGEOUS costumes, feathers and all – more reserved Friday night But PATTI, true to her fashion, wore an ensemble with designed “chicken” feather protruded from DA BUTT, later short mini silver faux frock, showing her pretty legs “STRUTTIN’ IN HIGH HEELS – AT 64 she’s STILL able to wear them!

The LABELLE LADIES performed 16 years together, HOT 70s girl group, DELIGHTFULLY OUTRAGEOUS in sequined gowns, bouffant and polished choreography , gospel tinged funky ROCK AND ROLL, R&B, POP sound! They were the DISCO CRAZE! Broke up at the TOP of their game!

Prior to show ran into entertainment writer LEE HILDEBRAND and his wife CONNIE, invited to join them for a cocktail in lower theater lounge. Lee wrote a good PREVIEW article in the San Francisco Chronicle PINK section about the Labelle Reunion Tour; ALSO chatted with noted San Francisco hairstylist WINFRED COOK, sharp in red jacket, matching beret, noticed gold tipped black shoes!!!. Winfred, highly critical theatergoer, when talking to him via phone the following day to get his critique on the concert “FANTASTIC! The ladies sounded great, looked wonderful!”; lovely SUSAN MORA shared The American Music Hall here in the City will once again hold the Annual BIRTHDAY CELEBRATION in remembrance of her dad MERL SAUNDERS on VALENTINES DAY February 14! Merl left his indelible mark on many, He passed October 24, 2008.

BEFORE leaving Oakland stopped in the popular LAKESIDE CLUB – HOT Blacked-owned establishment located near Lake Merritt. THE PLACE WAS WALL TO WALL FOLKS – the likes of regular ROY SMITH…we’d talked earlier that day when learning of the passing of our friend HANK CRAWFORD (SEE BELOW)…POPCORN – popular skycap at SFO, and perhaps BEST DRESSED MAN IN TOWN – PROFILING in all WHITE from head to toe – MY MAN WAS CLEANER THAN FRESHLY FALLEN SNOW!

DEAR, SWEET AVE … WE MISS YOU LADY! SHOCKED when the phone rang the afternoon of January 25, news that AVE MONTAGUE had passed that day, found dead in her Fillmore Center apartment; sad to know she died alone. After a week of hearing her name constantly on radio station KBLX in promotions that she was very much a part of the OFFICIAL West Coast celebration for the historic Inauguration of President Barack Obama at the METREON, downtown San Francisco. HEARD she was not feeling well that evening.
.
AVE MADE HER MARK in this town! Established well-known publicist and Founder/Producer San Francisco BLACK FILM FESTIVAL, her love and passion for years; she delved into making what it came to be – 2008 its 10th year, already a lineup scheduled for June; Hopefully someone will take up the TORCH and keep it going!

I will miss the many conversations shared. HAPPY I gave the Lady her FLOWERS WHILE SHE COULD STILL SMELL THEM in praise of her accomplishments, for she’d come a long way since I’d first met her in the late 80s, a time she’d recently moved here from Back East!

AVE, as I prefer to call her, was at the RIGHT PLACE at the right time when she moved into the Fillmore Center Apartment during the early days of proposal for the Jazz Heritage District! RASSELAS Jazz Club was the HOT ACTION ON DA ‘MO! Owner AGANOFER SHIFERAW hired her to handle his GRAND OPENING. Ave had CONNECTION with the media, ESPECIALLY personalities like myself, BARBARA RODGERS, CAROLYN TYLER, BELVA DAVIS to name a few.

THE FILLMORE PR LADY went on to serve the Grand Opening of YOSHI’S SF, 1300 on FILLMORE and SHEBA Lounge! MOAD (Museum of the Diaspora) Opening; Lorraine Hansberry Theater, Jazz at Pearl’s, Marcus Bookstore, so much more. After being in the business over 30 years, I’ve known many WHITE publicist, established good rapport with them, always privileged to cover Jazz Clubs, Festivals, BUT Ave was the FIRST SUCCESSFUL Black PUBLICIST in this town that I can remember! She quietly went about her work to honor performers of stage and screen, and bring the community the best in film.

Ave assisted JOAN ROSENBERG, former Publicity Director for Yoshi’s (now with Goldenvoice) during the hectic opening of Yoshi’s on Fillmore. Rosenberg sadden when I informed her of Ave’s passing, her heart sanked, appreciated me telling her, “The thing I remember about Ave was her kindness and calm in the middle of chaos. I will miss her but her contributions to the community will live on.” The sweet lady will always be an integral part of not only San Francisco BLACK HISTORY, but remembered by many independent filmmakers who struggle to get their works shown! As of this writing Memorial services are pending.

In closing, word came to me last Friday afternoon LEGENDARY saxophonist HANK CRAWFORD after a long illness, passed Thursday, January 29, at the home of his sister in Memphis, TN, . He was 74. Born Bennie Ross Crawford, December 21, 1934 in Memphis, Crawford gained fame with RAY CHARLES Band (1958-63) and went on to cement his career on recordings and live performances.

Developed a friendship with Hank, year ago when meeting him at Kimball’s when on Grove near Davies Hall, where he headlined. Always called him on his birthday. So much to say about him, and the late organist JIMMY McGRIFF – TWO SOUL SURVIVORS , but space will not permit. Hank and McGriff appeared several years ago in the Bay area at SWEET JIMMIES in Oakland! SERVICES for Hank will be held this Saturday at R. S. Louis and Son, 374 Devance Ave., Memphis, TN 38126.