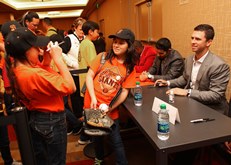 FEELS SO GOOD – GIANTS BASEBALL! The boys of summer are back! Plan to be at AT&T Park next Tuesday for the 2014 Season Home Opener!

I have been following the Giants, as a fan and reporter, since the team moved to San Francisco in 1958; a time when there were several African American players ; the likes of the SAY HEY KID – WILLIE MAYS, Willie “Stretch” McCovey. DISAPPOINTED over the lack of Black players these past two years! HOPEFULLY, only temporary!

From a BLACK prospective. Today, young African American youth who participate in school sports, seem more interested in basketball and football (never see any baseball played at Bayview Park/K.C. JONES Playground on Third Street in the Bayview district) therefore a lack of interest shown in the game of softball and baseball. Plus, slow process to climb in the profession. Money to survive – most African Americans lucky to make it to the minor leagues, do not have moneys to pay a lot of their expenses because of low bonus pay and financial support from families; many come from single family homes – mother head of household. It’s tough!

MLB Commissioner BUD SELIG recognize the problem. Last year, announced the creation of an On-Field Diversity Task Force to address the talent pipeline that impacts the representation and development of diverse players, and on-field personnel in Major League Baseball, PARTICULARLY AFRICAN-AMERICANS, and a need to REVIVING Baseball in Inner Cities. A task force was formed, that included FRANK ROBINSON, Hall of Famer; MLB Executive Vice President of Baseball Development.

BLACK PROFESSIONAL baseball players, active or retired, need to get involved in keeping an interest in the game, and relate the history of the struggles black players endured due to segregation, AND the story of JACKIE ROBINSON’s impact on the game, related in the movie “42”.

Retired former Giant outfielder, THE hatch man – JEFFERY LEONARD, who lead a distinguished baseball career, was hired this season as Giants Community Ambassador, and will connect with various community organizations, schools, talk to at risk kids, and other duties. I’m sure, among his travels, he’ll visit the WILLIE MAYS Boys and Girls Club, located in BAYVIEW Hunters Point, high above Third Street, at 195 Kiska Road.

The club was dedicated in June, 2008. Mays and members of the Giants hierarchy there for the special celebration, as well as community folks. The club’s athletic director JAKE BABICK, a Junior Giant Commissioner, run the Bayview program (there are 8 in the City, that include Visitation Valley and Sunnydale.)

The Play Ball Lunch, last Friday, at the Hilton San Francisco Union Square Hotel, kicked off the GIANTS 2014 season, that celebrates the 20th Anniversary of the JUNIOR GIANTS! The program was established as its flagship program of the Giants Community Fund, and now serves over 21,000 boys and girls, ages 5 to 18 in 90 communities. Started in 1991 by former GIANTS Manager DUSTY BAKER who was recognized at the luncheon.

THE Giants Community Fund collaborates with the San Francisco Giants by using baseball as a forum to encourage undeserved youth and their families to live healthy, productive lives. A free, noncompetitive and innovative baseball program for boys and girls, ages 5-18. The Play Ball Lunch , presented by Blue Shield of California, is a key fundraising event for the program which serves over 20,000 kids throughout the state. Always a sellout, lots of excitement for fans and kids especially – players signed autographs during the VIP reception prior to lunch.

The SAY HEY KID – WILLIE MAYS was not in attendance. Really wanted to briefly chat with him about the Willie Mays Boys and Girls Club. Dropping a few names – Foxy GIANTS PA Announcer, RENEL BROOKS-MOON,stunning in stylish orange and black designer dress; Golden State Warrior ICON, NATE THURMOND, among the many guests and supporters of JUNIOR GIANTS!