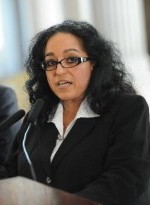 HOW SWEET IT IS! The 49ers are on their way to the SUPERBOWL – better believe it after Sunday’s dramatic win over The New Orleans Saints! NFC Championship play this Sunday at Candlestick Park taking on the New York Giants! Quarterback ALEX SMITH destined to be vindicated for all the years he has struggled under several head coaches, and disenchantment of the fans who wanted to see him released, and hire a new quarterback!

Alex, with the help of your teammates, make your comeback complete this Sunday! GO VERNON DAVIS – you and Alex were awesome those last few minutes of Sunday’s game! The crowd at the Monte Carlo Restaurant and Bar were elated! Half time, owner THERESA DEROUEN served up her Cajun specialty Red Beans and rice with turkey! At the end of the game, the club erupted with cheers, high fives.

Surprised over the appointment. When lunching at John’s Grille several days before Lee’s inauguration, engaged in a brief conversation with The Mayor, who shared, when I suggested Breed’s name for the Dist. 5 seat, shook his head saying he had a hard decision to make as to whom he would appoint to serve out the year remaining on Mirkarimi’s term (the successor would have to campaign and run in the November election).

Bayview community activist AND QUEEN – ESPANOLA JACKSON put her SEAL OF APPROVAL on the selection of Olague! Prior to deadline, called her up to ask if she supported the mayor’s appointment – an enthusiastic YES! She said as a city planner, Olague always supported Bayview Hunters Point reference shipyard TOXIC, voted against the EIR on behalf of the community.

Olague, during her tenure on the City Planning commission, cast a vote AGAINST development projects at Hunters Point, Treasure Island and Parkmerced. In particular, the Hunters point development angered many in the Bayview community, that saw a chance for jobs. And pointed out to her that evening by one of the guest, parts of the Mission Bay Projects would have brought jobs to Hunters Point.

SUPERVISOR MALIA COHEN, District 10, introduced her to the well attended event, that went well despite occasional mike problems, and annoying noise at the bar by some – HEARD they were trying to disrupt the meeting. Normally events are held in the back lounge but due to the overflow, moved to the front of the club. It was announced that Cohen and Olague will work TOGETHER on issues that affect their districts!

Supervisor Olague heard a mouthful from members who want to see CHANGE – Fillmore priority issues like the UNFINISHED AGENDA – forced MIGRATION of Blacks from the Fillmore, long discussed in the hot area of the Western Addition which she will definitely have to deal with.

President SPENCER, owner Chicago Barber Shop located across the street from Rasselas, passionate in expressing they want her to LISTEN to their concerns; raised his voice when she was talking to someone, patted his agenda paper on the table instructing her to LISTEN! She seemed a little tense, but during the question and answer segment, moderated by LANCE BURTON, loosened up.

CARLETTA JACKSON-LANE, of Sojourner Foster Family Service Agency, located in the Bayview, approached the subject of mental health and need for more accountability for disbursement of funds. Felt when moneys trickled down, Sojourner not get a fair share. The supervisor agreed she would meet with her to discuss the issue. There will NOT be an easy ride for Olague, a lot of demands already on the table, as the impression given by AGANOFER SHIFFERAW, Host and owner Rasselas, somewhat angry tones about the Community Benefit program not working in the Fillmore business district. Surprised Rev. ARNOLD TOWNSEND was quiet, but maybe low-key due to a cataract operation, a huge patch covered his left eye.

Community activist/photographer ACE WASHINGTON let his voice be heard! He’s been a dedicated fighter in keeping the Fillmore-No-More alive, and Migration of Blacks due to gentrification when redevelopment plowed through the area, thus permanently relocated members of the Black community ; many lost businesses, homes, jobs.

For me, the night was a DOUBLE HEADER, booked the 8 o’clock show at YOSHI’S to see one of my Jazz Favs – multi-grammy winner trumpeter ROY HARGROVE and his terrific musicians! JAZZ HAS BECOME AN ENDANGERED SPECIES at the Fillmore spot, not as much pure jazz as I would like to see, therefore happy to absorb the sweet phrasing of Hargrove on a ballad, and hard driving jazz selections with his mainstay saxophonist; the piano player was DA BOMB! Hey, YOSHI WAS IN THE HOUSE – HER HOUSE! When running to the ladies room, noticed SUPERVISOR OLAGUE talking on her cell phone – gave her a high five!

IN closing, HAPPY BIRTHDAY to vibraphonist BOBBY HUTCHERSON – fans can do the same this Friday and Saturday night at Yoshi’s San Francisco!