“I HEARD THAT:” A SALUTE TO JAZZ HERO SONNY BUXTON… 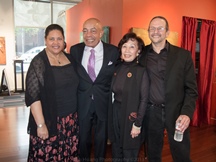 MOTHER was literally out of her mind Sunday – screaming, jumping up and down, frantically cheering for the Golden State Warriors, down by one game, to survive San Antonio Spurs threat to put the lights out on Head Coach Mark Jackson and his young team – what a thriller win for the Warriors! Sunday, tied 2-2! Back to San Antonio; hopefully bring the game back to Oakland and Oracle Arena to win in front of hometown crowds!
Switched the TV dial back and forth to the GIANTS game to observe pitcher Tim Lincecum and a team win! AND GOLF! AH, TIGER WOODS won the Players Championship in Florida, and FIRST big Tournament win for him in 5 years! GO TIGER!
EXHAUSTED, ended my day at the 7 Mile House over on old Bayshore and Geneva Avenue, listening to swinging Jams put down by drummer Vince Lateano Trio, featuring saxophonist ANDREW SPAETZ. A good hang!

MOVING ON! The month of May has been quite interesting over at The Jazz Heritage Center (JHC) on Fillmore, under the creative juices of CHRISTINE HARRIS, Director JHC, now at the helm since former director Peter Fitzsimmons moved on to other endeavors. Harris is doing a wonderful job KEEPING JAZZ ALIVE ON DA ‘MO!!!

Jazz Guru SONNY BUXTON, KCSM-FM 91.1, host announcer, Saturday midday Jazz, spin sounds that range from swing, bebop, ballad, featuring some of the legends of the music, and those living artists today. His remembrance of personalities and historic happenings in the music is a true education for his listeners, and those who attend his lectures. I love to hear those vignettes.

This gem in the midst of the Bay Area Jazz scene was honored at JHC in The Lush Life Gallery, the afternoon of Sunday, May 5, on behalf of the National Jazz Journalists Association, recipient of the prestigious “2013 Jazz Hero Award” for his contributions and dedication to broadcasting, Presented by the Jazz Heritage Center and WAYNE SAROYAN, editor/publisher of JazzWest.com. (PHOTO by Bob Hsiang; L-R Christine Harris, Sonny Buxton, Pearl Wong and Wayne Saroyan).

In addition to the awards program, a marvelous new exhibit, coordinated by JHC, feature photographs of Buxton, curated by Nancy Hom, in The Koret Heritage lobby that leads to entrance of Yoshi’s, for all to view – Just marvelous – check it out!

Stylish PEARL WONG accompanied Buxton – the lady looks wonderful! The two co-owned the popular North Beach nightclub “Jazz at Pearl’s,” sadly closed in June 2003 – I WAS THERE! I have always been a supporter and admirer of Buxton – just’ loved MILESTONES, his club when on 5th Street near Harrison and freeway ramp, opened 1984, until doors closed several years later. Heartbreaking!

Also on the scene – Joyce Crum, Director, San Francisco Housing and Homeless Programs, and hubby Elvin Crum(retired liquor salesman, one of the first Blacks in this area to be hired); Barbara Frierson, photographer Hubert Lewis, who photographed many of the Fillmore club personalities who frequented nightclubs of the past.

Buxton, a native of Seattle, has had a wonderful life, still more pages to be filled! June 7, he will celebrate another birthday! Quiet as its kept, Buxton has been writing his memoirs, to be released soon.

This Sunday, 3 p.m., in Heritage Media and Education Theater (1330 Fillmore – next to Yoshi’s Lobby) Sonny launches his monthly conversations, beginning with veteran journalist and longtime Bay Area resident BELVA DAVIS , who recently retired. Should be a stimulating evening!

HEY, ITS NICE TO BE NICE AND TO ALL OF YOU OUT THERE…LOOK FOR ME…I’LL BE THERE…
E-mail Rochelle at iheard@earthlink.net