“I Heard That”: A Conversation With Donna Brazile – Stirring the Pots of Political Gumbo … 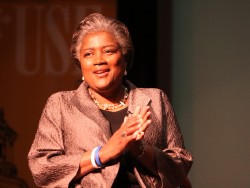 The event, in celebration of Black History Month, co-hosted by the African American Studies Program and the Black Student Union, started promptly at 6:30 p.m., lasting a little over 2-hours, followed by USF Annual Black Cultural Dinner at McLaren Complex.

Professor Taylor teaches in the areas of American Politics, Black Politics, National Political Leadership, and Race and Ethnic Politics at USF, and is the President of the National Conference of Black Political Scientists. He participated in the Million Man March. And recently completed a book entitled, ‘Sons of Thunder: Malcolm X, Louis Farrakhan and the Haunting of America’ to be released later this year.

Ms. Brazile is the FIRST African American woman to head a major Presidential campaign when she served as campaign manager for former VICE PRESIDENT AL GORE. Author of the best-selling memoir ‘COOKING with GREASE: Stirring the Pots in American Politics’. published in 2004. She is an adjunct professor at Georgetown University, a syndicated newspaper columnist for United Media, an on-air contributor to CNN, NPR, and ABC.

There was a lot of excitement by the students and staff in anticipation of the evening. Among those seen were former USF Board member FRAN STREETS, and Commissioner JOSEPH MARSHALL, President San Francisco Police Commission Board.

Professor STEPHANIE SEARS, Director USF African American Studies Program, kicked off the evening with greetings and introduced Professor Taylor and Ms. Brazile, both comfortably seated on stage at a small table, A lively, interesting dialogue between the two, enhanced by Brazile’s’ whimsical smile in humor, sassy, blunt; conversation ended with students (a Gumbo mix) fledging questions to the dynamic lady who proudly stated she was 50, got into politics because that is where the action is. Definitely Brazile came across as one proud down to earth lady – warm as a POT OF GUMBO!

A Native of New Orleans, Brazile, known for her fondness for cooking, started talking about GUMBO! A take on ‘Cooking with Grease: Stirring the Pots in American Politics’ and HER ROOTS, “GUMBO IS A RITE OF PASSAGE – A SPIRITUAL THING” that must have the Holy Trinity ingredients (garlic, peppers); a thick soup usually mixed with OKRA, of which Brazile expressed a mix that keep us together through thick and thin; OKRA brings you back to your roots! Sage comments about the staple of many New Orleans in relationship to the horrible experience of HURRICANE KATRINA, and how many residents have yet to come back; home; loss suffered by her family (despite warnings her father would not leave – survived) ). One of 9 siblings, politics was much discussed in the home. The lady know all about the nourishment of a bowl of Brazile family Gumbo.

Shared she began her political career at the age of NINE when she worked to elect a City Council candidate who had promised to build a playground in her neighborhood; the candidate won, the swing sets were installed, and a livelong passion for political progress was ignited. After MARTIN LUTHER KING, Jr., was assassinated, she committed her heart and her future to political and social activism.

WHO DAT!!! Brazile proud of the New Orleans Saints’ Super Bowl win, gave the people something to cheer about, a coming together. AND the election of MITCH LANDRIEU, former Lieutenant governor, New MAYOR of the City, good for the City; shared she will be watching to see if he make good his campaign promises to bring all New Orleans back home!

The veteran Democratic Strategist whose passion is ENCOURAGING YOUNG PEOPLE TO VOTE, to work within the system and to run for public office, stating INDEPENDENT VOTERS are the key, cited historic names of Black women SHEROES who came before us, like Ida B. Wells, Harriet Tubman, BARBARA JORDAN, urged the students to get a sense of history.

Passionate about health care – Brazile’s mother died at 50, NO healthcare, support Obama’s attempts to push forward Healthcare Reform – “Obama has to KEEP the BALL rolling – STOP PASSING to Nancy Pelosi, Harry Reid – CARRY THE BALL!” The day of Brazile’s visit, the televised WHITE HOUSE Health Reform Summit convened with both Democrats and Republicans aired on CNN of which Brazile is a CNN Commentator seen regularly on Wolf Blitzer, and called upon throughout the day for comments when station would break away from the forum to join top panelist. one busy lady whose input is necessary, AND she noted she is not a TOKEN!

The dialogue between Professor Taylor and Ms. Brazile was quite stimulating, gave me an insight to Taylor who lead the conversation.
Did not get to meet him nor Brazile. The dinner was the key!

CORRECTION! In last weeks column – MAKING THE ROUNDS segment, noting the San Francisco based Rhythm and Blues Club event. My sincere APOLOGY to Mrs. BRENDA ADAMS for incorrectly stating she is battling Cancer; she has health issues BUT NOT CANCER! Again sorry for the misunderstanding!

CALENDAR NOTE – 30th Anniversary BLACK CUISINE this SATURDAY at the Bayview Hunters Point Multipurpose Senior Services, Yosemite at Third Street. Come out and celebrate an all day tradition tasting SOUL FOOD that date back to the ROOTS of elderly seniors, and others. A fundraiser that benefit the critical programs currently supplied by the Senior Services. Info: (415) 822-1444. Look for me chowing down, pattin’ my feet to the live music on stage, having plenty fun!

HEY, IT’S NICE TO BE NICE AND TO ALL OF YOU OUT THERE … LOOK FOR ME … I’LL BE THERE …
E-mail Rochelle @iheard@earthlink.net