“I Heard That:” A Classic Evening with Smokey Robinson; Steppin’ Band at the Boom Boom Room … 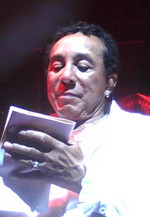 AH, Cool, classic Summer nights, the theme of San Francisco Symphony Concerts at Davies Symphony Hall. The evening after July 4th, Motown Great SMOKEY ROBINSON in the spotlight! The Star – sexy, provocative, smooth style, performed his signature hits of Motown Records, the Miracles, of which he was a leader; and as a soloist.

The fashionable Smokey shouted, “We came to have a good time – to be intimate, get closer, touch, feel“. Opened the evening with “Shop Around,” the Miracles’ 1960 single, which became Motown’s first number one hit on R&B singles chart. He got loose, joined by two sexy dancers (live props for the evening) “You’ve Really Got a Hold on Me,” romancing in song from his “Now and Then” …a few cuts from “Timeless” album, swinging on “Fly Me to the Moon,” swaggering dance steps – not over exerting himself – performed for almost 2-hours – NO intermission – backed by his quartet of musicians, and Symphony Orchestra, guest conductor Sarah Hicks.

SURPRISED, after about an hour the company would leave the stage – Smokey explained they were working on the clock, (union). The concert continued. Smokey and terrific Rhythm section (7 musicians and vocalists) continued to perform in what was a beautiful packaged show!

Smokey momentarily left the stage to change the stylish black suit he wore, black and white spectators, to return flashing in baaaad lavender leather pants, matching boots, white shirt, hanging diamond cross revealed from the open shirt that showed his chest – of course diamond ear studs. Oh, for a mellow 70-plus he was too cold! When singing “Being with You” sexually swayed his body – constantly … Silently thought, GO ON Smokey – I FEEL YOU!

On stage at the BOOM BOOM ROOM, on DA CORNER of Fillmore and Geary, OSCAR MEYERS and STEPPIN’ Band were Steppin’ deep with DA Funk, mixed with Soul, Jazz and Boogaloo, late Sunday afternoon into the evening in celebration of the weekend Annual FILLMORE STREET Festival. I always end up catching Steppin’s groove – for me the HOTTEST act on the Street! Meyers, himself a one man rhythm machine – getting down righteously, blowing on trumpet and percussion.

Seated in the private closed off booth, reserved in memory of the late living blues man – JOHN LEE HOOKER, brought back memories of those days when he was the King, and the club, then called John Lee Hooker’s Boom Boom Room, was OFF THE HOOK! Owner ALEX ANDREAS was looking foxy in a full thrust of black hair, and teasing goatee.

Boom Boom Room, former site of JACK’S of Sutter Street fame – legendary Black-owned club, at the time, last of those black establishments on Fillmore when it closed it’s doors in the late 80s. 1300 Restaurant, at Fillmore and Eddy, has a dedicated wall of photographs in the lounge, depicting the legends of Fillmore and its personalities.

Strolled up to MARCUS Bookstore – the ground floor is the soul of Bop City! Sidewalk musicians held a crowd. FIRST stop – Fillmore and Eddy to check out the bandstand sounds – Bishop FRANZO KING and Family of The John Coltrane Band were preparing to blow em’ away, warm up the chilly corner. Walked in 1300 for a Brunch special. Who walks in but sassy Blues lady – SISTA’ MONICA, to enjoy a fine glass of wine, while waiting to go on stage. She left Monday for a gig in Paris. Broke my heart, for I wanted to go with her and entourage!