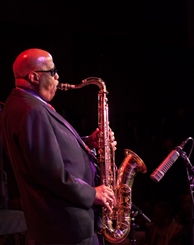 BRAVO, to CHRISTINE HARRIS, Director, Jazz Heritage Center (JHC) who organized the event in celebration of JHC’s 5th Anniversary, and Salute to a Living Jazz Legend! JHC, a multi- space complex, located between Yoshi’s and 1300 Restaurant on Fillmore, that include the Lush Life Gallery. Harris is doing a wonderful job in keeping the Center filled with lively creative activities, booking artists and occasional live jazz performances. The John Handy exhibit , curated by Nancy Hom, is on display in the JHC Koret Heritage Lobby through April 28, and is free and open daily to the public.

Such a wooonderful opportunity to party with the legendary saxophonist, and stellar longtime Bay Area musicians who came out to perform – swinging vocalists Jamie Davis (opened with “Night and Day,” Johnny Heartman’s “The Very Thought of You,’ soulful “My Funny Valentine”), and lovely songbird Denise Perrier whose mesmerizing!

Rhythm section comprised of Glen Pearson on piano, a fine drummer from out of town (shame on me – didn’t get his name), guitarist Calvin Keys, Ron Belcher on bass, and Robert Stewart sitting in on sax (John was his mentor) until it was time for the STAR to join the band midway through the concert. Handy received a standing ovation, applause, and the singing of Happy Birthday. The afternoon set kicked off with “Red Top”. Jazz Guru Sonny Buxton emceed .

The celebration started at 2 p.m. Prior to the music tribute, a VIP Champagne Reception was held in the Lush Life Gallery, lively with excitement of the afternoon, conversations abound, photo opts with Handy, handsome in blue suit , dark shades, looking nothing like 80! His charming wife Del Anderson, stunning in red suit and matching heels.

My awareness of Handy date back to his early days performing on the jazz scene in San Francisco, and a time when his big commercial hit “Hard Work,” jumped off the R&B charts in mid-70s. The original (if you can find a copy) still sounds good! Handy gigged and recorded with awesome Charles Mingus Band; rave reviews under his leadership at the Monterey Jazz Festival in mid-60s. John Handy is a phenomenal musician, composer, arranger, teacher and leader – one of the greats of this music we call JAZZ!