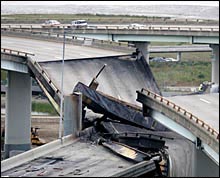 Sunday morning’s crash of a tanker-trailer carrying thousands of gallons of gasoline that resulted in the collapse of a McArthur Maze overpass to the Bay Bridge should encourage Bay Area transit and emergency officials to seriously consider the purchase vehicular ferries, particularly for the transport of hazardous materials during non- commute hours.

Ferries and barges were routinely used to transport cars, trucks and cargo across the Bay before the construction of the Golden Gate and Bay Bridges in the 1940s. After the bridges were built, ferry service across the Bay was discontinued until the early 1970s, when Golden Gate Transit launched its ferry fleet of passenger only service to Sausalito and Larkspur. In the past two decades ferry service has expanded to Oakland, Alameda and Vallejo, and the ferry played a major role in transporting commuters across the Bay after the 1989 Loma Prieta earthquake.

The Metropolitan Transportation Commission (MTC), the super agency that dictates transit policy for the Bay Area, is currently studying the feasibility of long term passenger ferry service between The City and SFO, Redwood City, Richmond, Sacramento, Petaluma and Napa. That study should also include the return of dual use passenger/vehicle ferries. Past studies on future Bay Area ferry service have not included vehicle ferries and MTC officials have not seriously considered proposals for vehicle ferry service.

Seattle, New Orleans and New York City operate dual use passenger/vehicle ferries that transport thousands of vehicles and passengers each day (New York’s ferries currently do not carry vehicles because of security reasons.) Bay Area passenger ferries currently operating on the Bay take hundreds of cars off the Golden Gate and Bay Bridges each weekday, and passenger/vehicle ferries could take even more cars off the bridges. Sunday’s fire raises questions of whether the current bridges or the under construction Bay Bridge replacement would be able to withstand not only another major earthquake, but also a fire of the nature of Sunday’s accident. Having a fleet of vehicle ferries could enable emergency personnel to get to San Francisco and Oakland if an earthquake or other disaster disables the Bay Area bridges, highways or other local spans. Most of San Francisco’s police, firefighters and other emergency personnel live outside the city, as far away as Sacramento, Novato and Napa. After a disaster, vehicle ferries could provide the only unobstructed route for emergency personnel to reach the city, and could also be the only way for tractor trailers and other large vehicles with disaster supplies to reach San Francisco. Under a disaster scenario in which serious damage occurs to BART lines, all nine bridges that cross the Bay, as well as to overpasses and underpasses of the major Bay Area freeways, vehicle ferries could be the only way for vehicles to get into San Francisco.

In additional to transporting cars across the bridge during rush hour, vehicle ferries could be used during non-commute hours to transport fuel tankers and trucks carrying other hazardous materials across the Bay. Limiting trucks with dangerous cargo to water routes could limit or entirely prevent the type of accidents that occurred Sunday on the Bay Bridge onramp. MTC and San Francisco emergency officials should seriously analyze the impact vehicle ferries would have on the Bay Area’s transit infrastructure, and how vehicle ferries can help transport emergency personnel and supplies after the next Bay Area disaster.