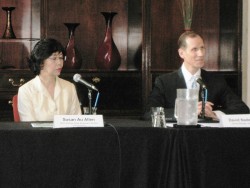 Within hours of the twenty-fifth anniversary of Martin Luther King’s national holiday coming to an end on Monday, January 17, San Francisco Grand Hyatt management called an early morning Tuesday press conference to denounce the hotel union, Local 2, UNITE-HERE, for its boycott of ten city hotels and the devastating impact it had on the city’s economy.

Of course, Martin Luther King first gained national prominence for his championing of the 1956 Montgomery bus boycott which itself had an admittedly devastating impact on downtown businesses. Nobody at the press conference noticed the irony.

“Local 2 leaders are doing damage to their members and to the city,” asserted David Nadelman, General Manager of the Grand Hyatt, situated in the center of bustling downtown San Francisco.

“They should get back to the bargaining table and negotiate. In fact, we ask Local 2 to be a faithful partner and actually conduct business calls to bring tourism back to San Francisco instead of transferring one million dollars to their boycott fund.”

“A prolonged labor action has a negative impact on our economy where tourists contribute $8 billion annually, 70,000 jobs are directly involved and $500,000 tax revenue is generated,” added Joe D’Alessandro, CEO, San Francisco Travel Association. “The city loses $30 million in lost revenue for each major convention we lose.”

A related issue raised of the press conference was the announcement that the two Hyatt union hotels in San Francisco filed National Labor Relation Board (NLRB) charges against Local 2 claiming that “Local 2 leadership unlawfully violated the terms” of the collective bargaining agreement when they “quietly diverted money [two cents an hour] from the Child & Elder Fund [to the Legal Fund], without bargaining with Hyatt.”

Normally two cents is not anything to fight about but the Hyatt Hotels see it differently, they are locked in a bitter labor dispute now dragging into its 16th month. And perhaps herein is the answer as to why the Hyatt chose to hurl serious legal accusations against Local 2 at this time.

The Hyatt press conference was called ostensibly because the “union leadership is hiding the truth” about funding of the Legal Fund and Hyatt was committed to “your right to know.”

Yet, thinking back about the press conference, the majority of the presentations emphasized objections to the unions stubborn bargaining and unjustified boycott and only secondary references were made about the Legal Fund controversy. I am reminded of the old Rodney Dangerfield joke: “When I was born, the doctor looked at me and slapped my mother.”

In other words, maybe when the Hyatt looked at the unattractive bargaining position of Local 2 and the unpleasant effect of the boycott, they decided to slap a lawsuit against something else closely related.

In any case, the union states that Hyatt claims of “unlawful” acts are patently false.

“Around eight years ago, the union switched over two cents an hour from the over-funded Legal Fund to the under-funded Child & Elder Care Fund and now we want to stop this allocation away from the Legal Fund because the situation is reversed. The Legal Fund needs money and the Child & Elder Care does not. Nobody objected eight years ago, why now?” asked Riddhi Mehta, Local 2 spokeswoman, “It won’t cost any of the hotels another penny of contributions.”

The Legal Fund provides aid to hotel workers who face unlawful evictions and foreclosures with the majority of funds now also being used to help those seeking citizenship and help with immigration processing. Rising government fees for immigration documents has led to the shortfall in the Legal Fund explains Local 2.

“Of the 1000 claims in the last six months made to the Legal Fund, 75% were related to immigration and Hyatt workers, ironically, are the second highest beneficiaries of the Fund,” according to a Local 2 representative.

This explanation has led immigration rights activists and religious and community figures to make their own accusations against the Hyatt of targeting immigrants. Hyatt is extremely sensitive to these charges with Mr. Nadelman responding that “charging we are anti-immigrant is as untrue as charges that we have the worst working conditions.” [The union previously cited an academic study listing Hyatt with the worst injury record in the industry.]

In fact, at the press conference in response to my question, Mr. Nadeleman conceded that Hyatt understood “the good work it [the Legal Fund] does” but that the “union failed to properly negotiate with us” about the arrangement.

I asked if the Hyatt would characterize the dispute as a procedural one and Mr. Nadelman said “yes, it is a procedural issue.” In response, the union argued that if the Hyatt genuinely agreed with the goals of the Legal Fund, there would be no NLRB charges over petty allegations that we did not speak with them.

“Why does the Hyatt jeopardize workers in need of our help for pursuing their dream of citizenship?” asks Aurolyn Rush, a 15-year Grand Hyatt employee. “At the negotiating table, Hyatt is trying to increase our health care costs, freeze our wages and freeze our pensions. At work, Hyatt housekeepers report the highest rate of injury in the country. And now, Hyatt is trying to deplete our Legal Fund. When will it stop?”

Union activists believe Hyatt’s obvious strategy is to put pressure on the union to soften its bargaining stance but they insist it will not work. There is some evidence for their resolve.

Following the Hyatt press conference inside, was a union picket line of several hundred on the outside, specifically protesting Hyatt’s accusations at today’s NLRB hearing that Local 2 leadership “acted unlawfully.”

So, nothing much has changed here. Another busy 24-hour cycle in a city where the hotel dispute remains very charged with no settlement in sight. Something is sure to break open at some point but for now, activists say, more intimidation means more resistance.

Carl Finamore is a delegate to the San Francisco Labor Council, AFL-CIO. He can be reached at local1781@yahoo.com