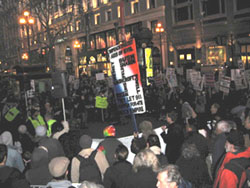 Four years ago, when George Bush was hell-bent on invading Iraq at a moment’s notice on flimsy evidence, most Americans supported him. Bush had a 70% approval rating at the time, but anti-war groups fought the odds and helped spawn the birth of a new peace movement. San Francisco led the way, with massive marches that brought out hundreds of thousands of people. I attended many of these marches in the run-up to the war, and it was a beautiful thing to be a part of.

Today we have an almost reversed situation. As Bush declares his plan to escalate the war and send 21,000 more troops, the overwhelming majority oppose it. His approval ratings are in the toilet, and he suffered a massive rebuke at the polling place last November. In poll after poll, we find that “middle America” wants our troops home – and understands that sending more troops is the last thing we should be doing. But in San Francisco, the same anti-war organizers who inspired us four years ago could barely get a few hundred people out to protest.

Maybe it was a cold night, and the march had been planned on short notice – but that’s not a likely reason. On the night before the war started in March 2003, it was raining torrentially. International ANSWER had less than 48 hours to plan the protest — but thousands of people converged at Powell & Market. Many more braved the weather, as the organizers gave them umbrellas to march through the rain.

Four years ago, there was a sense of urgency. We wanted to stop the war before it started. Now it’s been four years – and many of these people have been protesting on a regular basis during this whole time. I’ve personally lost track of how many marches I’ve attended. Call it “outrage fatigue” – George Bush is such a monster that we no longer expect anything out of what will happen. And the crowd had little or no faith that the Democrats in Congress will do anything to stop him.

It also didn’t help that Code Pink and International ANSWER had two separate events – just a few blocks apart from each other – which generated confusion. At 5:00 p.m., International ANSWER kicked off a rally at the Powell Street turn-around, replete with speakers. Speakers were extremely critical of the Democrats – and didn’t confine their message to just Iraq. At 6:00 p.m., Code Pink had a somber candlelight vigil to honor the 3,000+ dead soldiers, replete with folk singing, as they announced plans for a March on Washington on January 27th.

George Bush may be Commander-in-Chief, but the Democrats are not powerless to stop this latest escalation. They need the guts to be willing to refuse funding this war, much like how Congress helped end the War in Vietnam. The protesters called upon the Democrats to do this, but they weren’t very optimistic that it would happen – not without a strong grass-roots movement that demands it. And the turnout from last night’s protest certainly won’t be enough.

Before the Democrats get the courage to de-fund the war, a few things need to be cleared up. First, as Code Pink pointed out in their flyers last night, we can’t buy into the Bush lexicon and call his plan a “surge.” Let’s call it for what it is – an “escalation.” Allowing your opposition to frame the terms of debate and the narrative puts you on the defensive.

It’s a mistake that Democrats have fallen for once before. During the run-up to the War in 2003, George Bush and the Republicans kept on stressing the need to support the war. But once the War started, they immediately changed their tune: you didn’t hear them say “support the war” — it was “support our troops.” Democrats who may have wanted to oppose the war were suddenly cowed down into submission because they didn’t want to be seen as putting our troops in “harm’s way.”

The “support our troops” lexicon has hamstrung Democrats in being afraid to de-fund this war. But the anti-war movement does support our troops. They want to bring them home to safety, where they won’t get killed any more. Just ask Cindy Sheehan.

If you frame support for the war as supporting the troops, it becomes politically impossible to seriously start talking about how to end this war. Last week, Nancy Pelosi came out against funding the escalation, but repeatedly couched her words within the context of supporting our troops. By that rationale, Bush could ignore Congress, send in 21,000 troops to Iraq, and if the Democrats don’t want to fund the escalation, they will be seen as not “supporting our troops.”

At the ANSWER rally, protesters slammed the Democrats’ proposed “non-binding” resolution to oppose funding the escalation. They’re probably right that it won’t do anything. George Bush doesn’t listen to anybody unless he has to – the only solution, however politically difficult, is to put Bush in a situation where he has to end the war. And being willing to de-fund the war has got to be on the table.

Unfortunately, Democrats will need a lot more people supporting this option than the number of people who were out protesting last night.