Hundreds of Nonprofit Workers Tell Supervisors “We Need a Raise!” 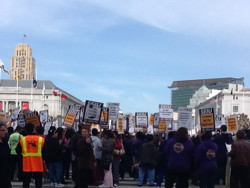 In what was likely the largest turnout of nonprofit workers in San Francisco history, an overflow crowd provided the San Francisco Board of Supervisors with gripping accounts of the impact of five years of frozen budgets on their personal lives, organizations, and on the people they serve. The crowd filled the Board chambers, overflowed the nearby overflow room, and took up every chair of a second overflow room created in the North Light court. Speakers described the profound unfairness of nonprofits getting no budget increases since 2007, demanding an end to the city’s balancing its budget on the backs of low-paid nonprofit staff. The hearing was an historic turning point in San Francisco, as nonprofit groups now realize their power and will not be held back.

I have been to my share of budget related hearings over the past thirty years, but nothing compares to the scene at City Hall that began at 2pm on April 18, 2012. It was a political earthquake on the day after the 106th anniversary of the great quake and fire, and the city’s approach to nonprofit budgets is unlikely to ever be the same.

Nonprofit groups have privately grumbled about flat budgets and no raises for years, but now a spark has ignited. Even nonprofit groups that long feared being seen as “political” realized that they had to finally speak out – and they showed that the sleeping giant of nonprofit workers has finally awakened.

Much credit for the massive turnout must go to the reform leadership team at SEIU Local 1021, whose President Roxanne Sanchez vowed upon taking office to increase union resources toward advocating for nonprofit workers. Sanchez assigned several top organizers to work on mobilizing nonprofit workers, and the massive turnout would not have occurred without this support.

The Human Services Network also turned out its groups in great numbers.

The Impact of Flatline Budgeting

Much of the testimony addressed the impacts of nonprofits not getting any budget increases for the past five years. And what was particularly valuable about the testimony was its similarity – nonprofits are suffering from the same crisis of unreimbursed health care increases (Conard House’s premiums have risen 71% over the past six years, which is close to the norm), workers comp, utilities, and insurance increases, stagnant capital budgets despite rising costs, rent increases (groups that lease hotels must pay landlords’ rent increases each year but the city does not include this increase in flatline budgets; for the Tenderloin Housing Clinic, this amount is $154,000 for next year).

Gail Gilman of the Community Housing Partnership was the first of many speakers to raise a troubling double standard. Whereas for-profit city contractors with multi-year contracts get annual contract hikes (known as “escalator clauses”) regardless of tough city budget times, nonprofits do not. So even though hotel leases are for ten or twenty years, nonprofit contractors leasing the hotels do not get annual budget increases even for costs that the city knows from the outset are guaranteed to increase each year.

It seems that every city contractor had a representative speaking at the hearing, and many spoke of the acute hardships their programs had undergone due to five years of flat budgets. Steve Fields of the Progress Foundation noted that nonprofit workers not only don’t get fair wages, but they “don’t even have a retirement plan.”

A representative of the Human Services Agency told the Supervisors that nonprofits needed to raise outside money to make up for flat-line budgets. Many speakers disputed foundations willingness to fund ongoing services, while othersnoted that their private fundraising could not make up for flat city budgets for five straight years.

In addition to the huge turnout and powerful testimony, the next best result of the hearing was that the Supervisors were particularly focused. Supervisors Carmen Chu, John Avalos, Malia Cohen, Jane Kim, and Scott Wiener constitute the Budget & Finance Committee, and were joined for a time by Board President David Chiu.

Many important questions were asked, and during the 2 ½ hours I was there I did not see any Supervisor leave. I sensed they were genuinely moved by the testimony and that they realize that the city cannot impose another flatline budget on nonprofits this year.

Supervisors Avalos, Cohen, and Kim have all worked for nonprofits, as have Supervisors Eric Mar and Christina Olague. This Board may have the best understanding of the nonprofit sector of any in history.

And nobody knows the financial hardships of working for nonprofits better than Mayor Ed Lee. To my knowledge, Lee never even earned as much as $30,000 annually despite being a Boalt Law School graduate and veteran Asian Law Caucus attorney.

Early in the hearing Supervisor Wiener acknowledged the unfairness of nonprofit salaries and asked speakers to offer ideas where money to fund budget increases could be found. Beyond Chron has offered budget saving ideas for years, and in my testimony I told Supervisor Wiener that we would promptly deliver him a packet of our past articles on this (and others with ideas should send them to all the supervisors).

The Mayor will not make final budget decisions until the next set of revenue numbers come in May. If projections are as strong as many predict, there will be ample revenue for a nonprofit cost of doing business increase this year.

SEIU Local 1021 President Sanchez spoke at the hearing, and later told me that her union is committed to fighting the battle for nonprofits throughout the budget process. And it was clear from my conversations with many in attendance that nonprofit workers are not going away, and are more focused on getting a raise than ever before.

I did not see a single media person at this remarkable hearing, which offered a rare perspective into how San Francisco feeds, houses, and provides medical assistance to the poor, and how it treats workers performing this task. Supervisor Avalos described the crowd as looking like the “Chamber has been Occupied,” and while the Board of Supervisors is obviously not the 1%, I took the comment to refer to the presence of many in the Chamber whose faces are rarely seen and whose voices are seldom heard.

It was also a powerful statement about Occupy’s message of income inequality. And how San Francisco’s flatline nonprofit budgets perpetuate this injustice

I’m not sure what it says about media priorities that a hearing on San Francisco’s nonprofit funding crisis was not deemed newsworthy. But the nonprofit sector does not need the media, because it has finally recognized its own power.

And now that nonprofit workers realize their power, there will be no turning them back.

Randy Shaw is Director of the Tenderloin Housing Clinic, which publishes Beyond Chron.