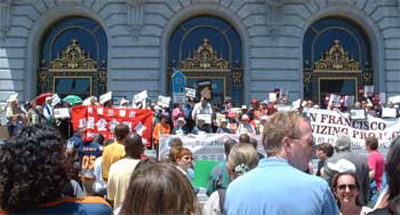 Hoping to put pressure on the mayor and the Board of Supervisors to reconcile their differences and agree on a comprehensive housing bond for the fall ballot, tenant organizers and housing advocates joined forces at the steps of City Hall yesterday for a noontime rally that drew over 200 people.

The rally – a peaceful demonstration that began in the blazing sun, circled around the block and ended up in the offices of select Supervisors – brought together a number of major non-profit groups, including the Chinatown Tenants Association, Coalition on Homelessness, San Francisco Organizing Project and Housing Action Coalition.

A handful of speakers took the podium to stress the city’s dire need for a comprehensive housing bond.

“Housing is not a luxury, not a privilege,” said Stanley Warren, a San Francisco Building Trades Council representative. “Housing is a right.”

In the past two weeks, supportive-housing advocates have been dumbfounded and appalled by the political games and battles waged within the legislative chambers of City Hall.

Two main camps have emerged championing their own housing bond measures: one side is pushing for the $210-million proposal sponsored by Supervisors Matt Gonzalez and Chris Daly, while the other side supports Mayor Gavin Newsom’s $195-million bond. The two proposals also differ in the income levels used to determine who receives housing assistance.

Last week, the mayor hinted at shifting his support to a third option: a stand-alone, $85-million supportive housing bond. Many believe a stand-alone bond is more likely to receive the two-thirds voter approval needed to pass in November.

While speakers at yesterday’s rally pushed for compromise on a comprehensive housing bond, they reiterated the importance of any kind of agreement that would get the measure on the ballot. Once the Board approves a housing bond, the fight will begin to secure the necessary two-thirds vote.

After leading the crowd in chanting for half an hour, Reverend Norman Fong of the Chinatown Community Development Center guided banner-waving protestors around the block and then into City Hall. The crowd gathered inside City Hall before splitting off into smaller groups to pay individual Supervisors a visit.

By the time the rally moved indoors, the crowd had diminished significantly, but many tenacious protestors stuck around to give the Supervisors and the mayor a piece of their mind.

Duane Sears, who has been without a home for over a year now, said he attended the rally because he has experienced first-hand the need for supportive housing. After a “hellish year on the streets,” Sears has finally secured a room for himself at a hotel in the Tenderloin, which he will move into later this week. But his personal success at finding a temporary place to live did not deter him from showing his unflagging support for a housing bond.

“There are a whole lot of people on the streets right now, people who need to be housed,” Sears said. “I feel truly blessed to have finally found a place to live, but I look around and see there are still many people who have been and will be suffering on the streets.”

Sears said many people fail to recognize the immediate need for supporting and affordable housing in San Francisco even though it’s right in front of their faces.

“When you don’t have a home, you go into depression, get into drugs . you have no incentive or self-esteem,” he said. “Without housing, you have a bunch of dead people walking around the city, without the pride of being able to go home at night and just live.”

Sears added: “I don’t care who gets the political victory here . or which housing bond is placed on the ballot. Either way, something’s got to change.”