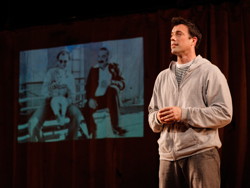 THE GAFFES KEEP COMING on purpose at A.C.T. And that’s exactly what Lorenzo Pisoni intends to do as he tumbles and stumbles, and lives to tell us all about his one-man show about growing up as the youngest member of the historic Pickle Family Circus. Not only is he tremendously funny, he also is a daredevil. He climbs a ladder with fishing fins. He takes more pratfalls than anyone can imagine. And Golly – I held my breath when he shows how to fall down fifteen or more stairs. Don’t try it at home. Even he admits that he has more broken bones than anyone else.

Pisoni also is a damned good actor. He was in Equus alongside Daniel Radcliffe on Broadway. At first you might think that he is just some kind of Clown in a Circus act, but as the show speeds along you see the talent, the training, the humor, more skills than you can imagine as a juggler, acrobat, clown and comedian. And the biggest and brightest smile in the world. It’s like – Gee, this guy really loves us!

As he grew up it was “Hello, Beddy-Bye – now get out of bed and learn some tricks.” That’s kinda what his Dad infused in Lorenzo when he was a kid. Yeh, Dad made it rough for him, but Lorenzo stuck with it, and his Dad. Together they were hugely successful and now, on his own – he is a magical, fantastic talent. The stage doesn’t appear there – it has no life until Lorenzo comes out on that stage – then everything seems to come alive. Even the Audience gave him three curtain calls.

There is no doubt about it. Lorenzo Pisoni and his father will always be on a stage. We may not actually see the father, but his son who is so spellbinding and colorful, seems to bring him on the stage just by talking about his Dad. The level of craft here is something to behold. It’s spellbinding, wickedly funny. Expect the unexpected.

This is one of the most entertaining stage shows of the year. You’re gonna fall in love with this hysterical and heartwarming evening. It’s non-stop joy.

(****The show is co-created by Erica Schmidt.)- “Astounding work!” AT THE AMERICAN CONSERVATORY THEATRE

The amazing cast of “Little Brother”. Copyright: Custom Made Theatre

FIRST OFF – Let me make this very clear in non-hi tech. The Custom made Theatre has become the cutting edge Theatre to go to these days. Lately they have brought thrilling and exciting plays to their stage at Gough and Franklin. There latest is “Big Brother” and it is loaded with Teen Swagger. And like most Teens they meet on the streets and create bonds with other teens that mistrust their family. They wouldn’t understand the high tech world anyway – “The Teens would say.”

The head Teen (Marcus) seems to always be the one who ends up in peril. He takes dangerous and scary chances. This play (based on the Cory Doctorow Book) sizzles. It bubbles over with enthusiasm and danger that leads Marcus to end up getting “Water Boarded” by some mysterious Homeland Security Force. Marcus and his friends clash with the ill-defined government agencies in the supposed land-of-the-free. The young teen Marcus has the energy of twelve teens. He’s charming – yet he can be a little annoying. He never sits still for very long. Like a beautiful Butterfly he flits away in a moments notice.

The version of the play (from the book) brings us to a world of deceit and mistrust, even among friends. Who can you trust? No one! No matter what you think about Politics, and other people’s opinions – danger lurks. There are touches of the book 1984.

Yes, these kids take chances. One of Marcus’s friends end-up in a secret prison, but that doesn’t stop Marcus from using an X-Box to hack into the government’s network on the Internet.

There is more excitement in this flawless production. The visuals are absolutely stunning. It takes perfect timing to pull off all of the high tech magic. Heck, these Teens even know how to hack your ‘Clipper’ card with a Radio Shack Radio. Just watching the all the various hues on the back wall is plenty of entertainment, but – it is the Actors that pull this play into another world. These Actors give searing and sizzling performances. The actors give there all in this erotic and pulse beating play. Here they are: Daniel Petzold as Marcus is flat out magnificent! Marissa Keltie as Ange – can change her persona at anytime – she gives the play that emotional spark! Cory Censoprano plays Darryl and many other characters. Cory’s acting is both masterful and confident!

JOSH COSTELLO HAS DIRECTED “THIS CRACKING GOOD THRILLER.” I wanna see it again!”

All in all, this play is hugely ambitious. “Scary good in this case — is riveting!” Here’s a line for you to remember. “People who date each other split up.” It’s in the play. Here’s another sentence that will shake you up – “Don’t you know about Bart? They blew it up!” It’s in the play.

AT THE CUSTOM MADE THEATRE
(Corner of Gough and Bush)