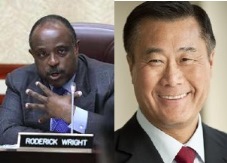 Despite attempts by Democratic Senators Rod Wright (D – Inglewood) and Leland Yee (D – San Francisco) to derail the bill, California tenants scored a huge victory yesterday with the passage of AB 1229. The bill seeks to overturn the disastrous Palmer appellate court case which jeopardized local inclusionary housing programs across the state. Over 150 California jurisdictions have inclusionary housing laws, which condition approval of private developments on the provision of affordable housing. These laws are essential to expanding the supply of affordable rental housing in California.

What should have sailed to easy victory in a Democratic legislature was fought tooth and nail by landlords, realtors and developers. These interest groups have invested heavily in Democrats and Republicans and often that investment pays off. It almost paid off here.

Senator Rod Wright led the charge, confident that his spirited advocacy against the interests of the people of his district would leave open the spigot that keeps real estate money flowing into his legal defense fund (Wright is fighting felony voter fraud and perjury charges). So passionate was his defense of limitless industry profits that Senator Hueso (D- San Diego) had to scold him for his raised voice and misrepresentations.

Senator Leland Yee nearly killed the bill. Yee represents San Francisco which strongly supports inclusionary housing requirements. Despite voting “aye” on SB 184 two years ago, a bill that would have done the exact same thing as the current bill, Senator Leland Yee refused to state his position on the bill for weeks and then voted against it. This was the same thing he did recently when voting against basic security deposit protections in SB 603. His recent anti-tenant and anti-affordable housing votes can only be explained as an effort to attract donations for his statewide race for Secretary of State.

The bill looked like it was in trouble in the early afternoon. The initial voted yielded only 15 of the 21 “Aye” votes needed to pass. A number of Democrats abstained, leaving an opening for advocates to nail down the additional 6 votes needed to pass the bill.

Assemblymember Toni Atkins (the bill author), Senator Ben Hueso (who handled the bill in the Senate), the Western Center on Law and Poverty, California Rural Legal Assistance Foundation, and other housing advocates brilliantly countered the misinformation campaign and worked to round up the necessary votes as the clock ticked. Tenants and allies across the state took to the phones calling their representatives demanding passage of this important bill. Together, these efforts were just enough to overcome the campaign by the real estate industry to protect unfair windfall profits from the Palmer Supreme Court ruling.

The fight to save inclusionary rental housing is not over. AB 1229 now heads to the governor. No doubt the same interests that opposed the bill in the senate will be demanding a veto. Call the governor today at (916) 445-2841 and urge him to sign this important bill into law.