How Would Jane Jacobs Zone? 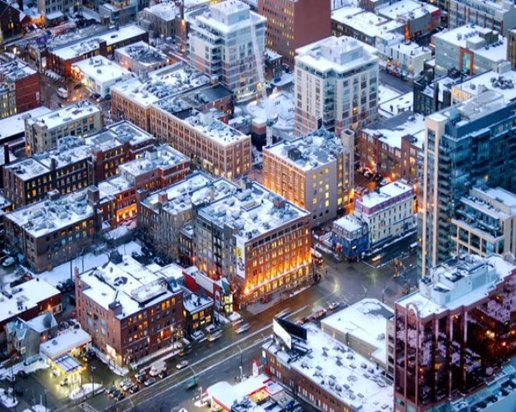 The King-Spadina area of Toronto is a living testament to how Jane Jacobs would shape the development of cities. Photo: IBlogTO

Everyone’s paying tribute to Jane Jacobs today, on what would be the pioneering urbanist’s 100th birthday. Jacobs’ classic critique of mid-century American urban planning dogma, The Death and Life of Great American Cities, is probably the most influential book ever written about planning. But her legacy is also contested, and her ideas still go unheeded in most cities. Was she too averse to change? And how do her theories of city-building work in practice?

Payton Chung at West North attempts to settle some of these questions by looking at Jacobs’ very real policy impact in her adopted hometown of Toronto. He revisits this passage from Death and Life:

[T]he greatest flaw in city zoning is that it permits monotony… Perhaps the next greatest flaw is that it ignores scale of use, where this is an important consideration, or confuses it with kind of use, and this leads, on the one hand, to visual (and sometimes functional) disintegration of streets, or on the other hand to indiscriminate attempts to sort out and segregate kinds of uses no matter what their size or empiric effect. Diversity itself is thus unnecessarily suppressed.

What most people don’t realize, Chung says, is that Jacobs put these ideas into practice in the 1990s, advising Toronto on a major downtown rezoning:

20 years ago, Toronto asked no less than Jane Jacobs about how to rezone two renewal areas on either side of downtown.

“The Kings Regeneration Initiative” targeted 400 acres of land along King Street, an east-west arterial with a streetcar. King-Spadina on the west side of downtown and King-Parliament on the east side were both declining CBD-adjacent industrial areas. Then-mayor Barbara Hall invited Jacobs to an advisory group on the regeneration project. “Paul Bedford, Toronto’s chief planner during Mayor Hall’s term, said that Jane kept encouraging him to take risks and to experiment,” writes Barry Wellman. The resulting code was a tremendous departure from how Toronto, and most other North American cities, regulated development: 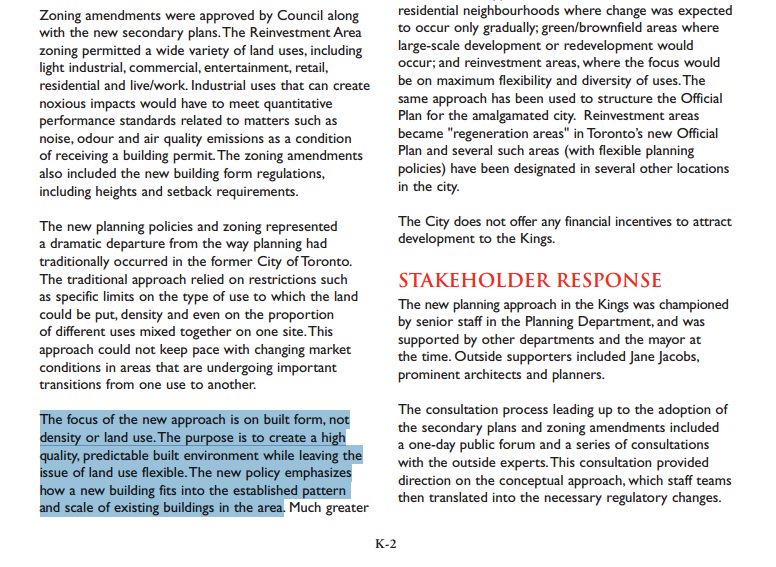 The results have been breathtaking — and might surprise those for whom Jane is a hero for stopping bulldozers. Not only have the “Two Kings” not lost jobs, as many industrial lands taken out of production have, but the number of jobs has increased by 58%. Even more impressively, 46,000 dwelling units have been permitted in the Two Kings, many of them in very large new high-rises.

Regulating by density and types of use is, unfortunately, still the norm in American cities. The most notable alternative, known as form-based code, requires “such a radical overhaul of the planning-and-zoning process,” writes Chung, that it has “yet to achieve wide adoption.”

There are some exceptions, as cities including Miami and Cincinnati are ditching “monotonous” codes in favor of zoning that is much more in the spirit of what Jane Jacobs spent her life trying to promote.

Elsewhere on the Network today: Greater Greater Washington explains why “jaywalking” might actually be safer for pedestrians in a lot of situations. Seattle Transit Blog says there’s a simple way to solve the dispute over how much parking to build by new Seattle light rail stations: have the transit agency sell the land. And Seattle Bike Blog reports that bicycling has skyrocketed in at least one important location during the current “carmageddon” event — the closure of the Alaskan Way Viaduct.