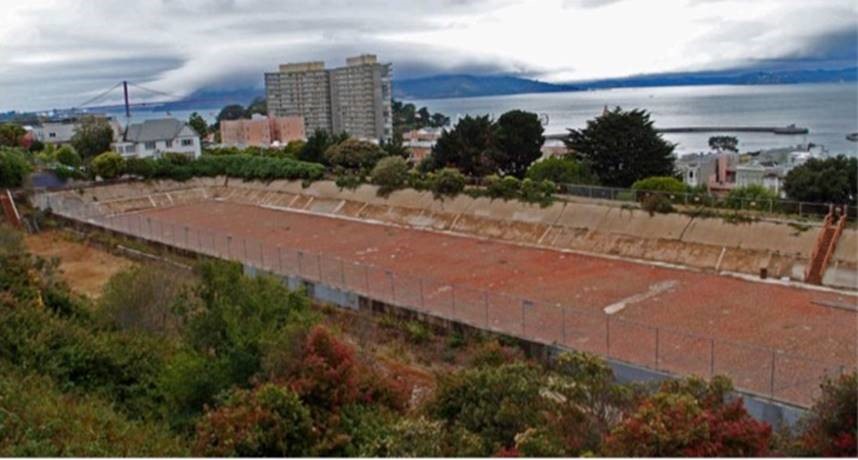 Why Cities Favor Parks Over Housing

“You could build housing here and a few hundred people can enjoy the view,” explained Leslie Alspach, president of the Francisco Park Conservancy. “Build a park here and millions can enjoy the view for decades.”—-SF Chronicle, Nov. 26, 2021

While housing advocates target restrictive zoning laws, wealthy neighborhoods have other ways to avoid new housing. For example, they can use their affluence to buy buildable public land and transform it into a park. And get the city to subsidize this plan!

The above scenario has just played out in San Francisco’s posh Russian Hill neighborhood. As described by Sam Whiting in last week’s SF Chronicle, when faced with a potential affordable middle-class housing development Russian Hill neighbors “chipped in $27.5 million to build Francisco Park, a rectangular oasis expected to open in early 2022.”

True, these city funds were massively leveraged by private dollars.  But let’s be clear: San Francisco taxpayers subsidized wealthy neighbors who did not want middle-class housing anywhere near their backyards.

I understand those who believe it’s not worth making a big deal over sixty units. But what happened at the reservoir sends a terrible message to other city neighborhoods failing to meet their housing obligations.  The message? The rich can and will buy their way out of meeting the new housing construction requirements of state law and the more significant demands of addressing climate change by increasing density.

There was an alternative vision for the site. But it was ignored.

In February 2014, longtime housing advocate John Stewart wrote a letter to then-Mayor Ed Lee urging that sixty units of housing be built on the reservoir (“It’s Tough to Get a ‘Yes” on Housing,” SF Business Times, February 7, 2014. It’s behind a paywall so will quote from other sources). Tim Colen, then leader of the SF Housing Action Coalition, wrote to the mayor in April 2014  “The evidence in Mr. Stewart’s presentation documents that this area of the City is already well served by some of the most pleasant parks and open space in San Francisco.  While parks are a desirable urban goal, we question whether there are not other neighborhoods with far less public open space that would fairly have a higher claim on scarce City resources.”

The Stewart and Colen letters attracted my attention at the time for reasons beyond the city’s need for housing. I was long frustrated by the city’s shortchanging of the Tenderloin’s open space needs. I was not happy to see wealthy Russian Hill getting money that should be going to a low-income community (then D6 Supervisor Jane Kim openly shared these concerns).

The city’s refusal to even consider middle-class housing—even when teachers and nurses were offered as prime candidates to live in newly built reservoir homes—appeared to also violate city law. As Rebecca Bowe of the SF Bay Guardian wrote in July 2014, “publicly owned “surplus property” – as the Francisco Reservoir is categorized – must be considered for affordable housing before city departments may let it go for any other use. Yet during years of discussion between neighbors and city officials to discuss this 4-acre parcel, the idea of building affordable housing apparently didn’t even receive minimal consideration.”

I wrote about the reservoir project in Generation Priced Out. I saw it as a classic example of how “affluent neighborhoods never have to mobilize to stop affordable housing projects because developers and city officials avoid such fights.” My chapter on this trend primarily focuses on a site long planned for 100% affordable senior housing in New York City’s upscale Nolita neighborhood.

In Nolita (North of Little Italy), once plans for housing moved forward the site’s tenant, backed by wealthy Greenwich Village neighbors, converted a site long used for storage into a garden. Opponents of housing then launched a campaign to” Save the Elizabeth Street Garden.” The same arguments made by boosters of San Francisco’s reservoir park were made. The difference is that advocacy by NYC’s Habitat for Humanity and the unwavering support for housing by Councilmember Margaret Chin enabled the Haven Green senior housing project to be approved. But the legal battle to stop the project continues, as does media efforts to reframe the project as “Housing vs Green Space” when the latter only emerged—as with the reservoir—to stop the housing.

I fear the reservoir outcome will stop a lot more than sixty units. Housing opponents in all neighborhoods will justifiably claim that San Francisco plays by two sets of rules. Denser areas like the Tenderloin, SOMA and the Mission are told that they must accept every proposed development to address the housing crisis. Russian Hill and other affluent single-family zoned neighborhoods are encouraged and even funded to skirt city laws and prevent even middle-class housing.

So while Leslie Alspach of the Francisco Park Conservancy sees the park as benefiting far more people than housing, the project actually makes it a lot harder for San Francisco to meet its state housing  obligations. When housing opponents in other neighborhoods ask why their views and open space needs are not as valuable as those in Russian Hill, what do you expect their supervisor to say?

They should say that if they had been on the Board in 2014 they would have ensured that housing was built on the Francisco Reservoir. But their constituents may still see a double standard for the rich being carried out in progressive San Francisco.