How to Prepare for Your Election Party: A Couch Potato’s Guide 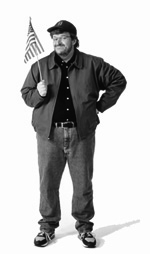 In the off chance you’ve been out of the country for a while, we’re in the middle of an incredibly contentious election. Pop stars have become political figures, the candidates are campaigning, and some of the campaign commercials seem to have bigger openings than Seed of Chucky. It’s no surprise then that as this election descends upon us, our video store shelves are sinking under the weight of competing ideologies. So, with all these political DVDs to choose from, where do we begin? With only one weekend before the election, what exactly should we watch?


Of course it all depends on where you’re starting. If you’re one of the few left-leaning theatregoers remaining who has not seen Michael Moore’s Fahrenheit 9/11, several local video stores (4 Star Video in Bernal Heights for instance) are offering the film for free this weekend. The documentary, which not only won at Cannes but also inspired such cinematic classics as Fahrenhype (straight to video) and Celsius 411 (now playing), remains the kind of film that you watch when you need something to really get you mad. Though his inferences might seem a stretch at times, the ultimate conclusion, that the current administration has manipulated the public’s emotions and preyed on our fears, feels inevitable.

But Moore’s movie is only the most prominent of the season’s political films. In the wake of the Swift Boat Veterans for Truth, George Butler’s Going Upriver: The Long War of John Kerry, relies on the voices of fellow Swift Boaters to paint a portrait of not simply a candidate but instead a man of huge character and strength. If there still exists an apathy about this election, a feeling that you can’t get behind any one candidate, then the film, based on the book Tour of Duty by Douglas Brinkley, will certainly do its part to move you. Activism is hard to achieve from your sofa, though this film may make you want to get up and support your candidate.

If Kerry’s charisma is not where your passions lie, perhaps you’re interested in the background of the man some people call the smartest man in Washington-Karl Rove. Bush’s Brain, another documentary, gives a sort of sickening insight into the political machinations of Karl Rove-the Bush campaign’s mastermind. On the one hand, the film is often times illuminating and informational, on the other it might not be the best film if you’re the type of person who still likes to believe that our political system has some basis in substance. If that’s the case, and if so I commend you, skip this film-you won’t believe it.

Rove’s media manipulations are consistently frightening, but they do rely on a media that is more than willing to play the same game. If you’re getting sick of CNN, Fox News, or even Comedy Central, several movies of late take a deep look at media bias, and the way we get our news. MoveOn.org’s push behind Outfoxed gave the film national attention, and more than one house-party screening. The film itself is more frightening than it is entertaining, often feeling far longer than its forty-five minute length. That’s not to say that the film doesn’t work, it might just be that I’m still upset that I can no longer trust Bill O’Reilly like I used to. On a very different channel there is Jehane Noujaim’s Control Room. The film looks at the production of news around the latest war in Iraq, specifically the differences between the American media and a station like Al-Jazeera. At times the film lacks a critical distance, but that may not be the point. Rather, the point lies in our country’s myopic media and their inability to consider how we play on stations that aren’t sold in our stock market. Leading up to November 2nd, it might be the most relevant notion-this election is not only about our country and our leader but also about the way in which we, as citizens, signal our approval or disapproval to the rest of the world. It’s much harder to spin in a language so foreign.

Behind all of the spin, of course, there are actually candidates. It’s sometimes hard to remember, but it’s why we’re here. Few films have captured a candidate in a more shocking manner than Alexandra Pelosi’s Journey with George two years ago. That the shock for so many lay in George Bush’s ability to charm the camera has worn off over the last two years, and what seemed, then, like infantile charm seem scarier by the minute. Her newest work, Diary of a Political Tourist, seems to promise more of the same, though the film seems less relevant as the stakes have changed. The most current interpretation of this type of film, the insider’s inside, in the model of War Room is Steve Rosenbaum’s Staffers. The documentary looks at the fight for the Democratic nomination oh-so-long-ago. Now that the primaries are behind us and the election only a little bit ahead, the film is both relevant and revealing, though one hopes that it’s more of a prelude to victory than history’s misplaced bookmark.

Let me be honest, there are other things one could be doing this weekend. Maybe you have one too many overdue fees at the local video store, and you simply can’t afford to rent something. A suggestion-bring your own camcorder, your own digital camera, or your own pen, and make your own story. This is one of the most important weekends in recent history, and it’s frightening for more reasons than the young children (or older ones) in costumes. November 2nd is frightening as well, and not simply because we’re celebrating Dia de los Muertos in the Mission. There are things to be done, and most of these DVDs will still be on video store shelves Wednesday. Given the lawsuits just leading up to this election, it might not be such a bad idea. We might need something to do while we wait for them to figure it all out and announce our next President.