How the Circus Transformed America 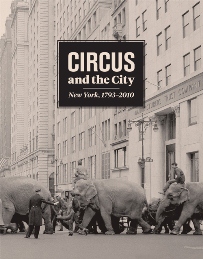 In early October I visited an extraordinary exhibition at the Bard Graduate Center in New York City, “Circus and the City: New York: 1793-2010.” Its title aside, the exhibition is less about New York circus history and more about the rise of popular culture, advertising, and popular entertainment in the United States. The exhibition runs through February 3, 2013, and is very highly recommend. For those unable to attend, and those whose visit whetted their appetite for more, there is Matthew Wittmann’s accompanying book, Circus and the City: New York: 1793-2010. Published by the Bard Graduate Center and Yale University Press, Wittmann’s work is less a book than a treasure. It includes photos of all the exhibits and much, much more, leaving readers spellbound examining P.T. Barnum’s legendary posters, Weegee’s photographs of circus attendees, and a vast collection of circus memorabilia. This book brings to life the days when the circus was at the heart of an emerging American popular culture, rather than a mere sideshow, and restores the circus to its rightful place as the progenitor of the nation’s entire entertainment industry.

I have no idea how Matthew Wittmann and the curators at the Bard Graduate Center assembled all of the historic posters, photos, games, and other circus memorabilia included in this book, but we should all be thankful they did. The book offers a wonderful collection of materials to explain how the circus, way off to the cultural sidelines today, once shaped the broader culture. As Walt Whitman said in 1856, for many “the circus is the only institution that breaks the monotony of the year.”

When you read about P.T. Barnum, and see the exhibit of his picture accompanied by the words “I Am Coming,” put yourself in the place of the small farmer, or urban laborer working 12 hours a day, six or seven days a week, with little opportunity to see a different world. Imagine their excitement at seeing posters announcing that a circus is coming to town, with pictures of large elephants, horses, and acrobats. Those working in the city might be lucky enough to see the circus marching into town as it heads to its tent; the book’s photos of such marches down Flatbush Avenue in Brooklyn and throughout New York City really capture the experience.

For most Americans, the circus was their first chance to see a live elephant, lion, or giraffe. In 1882, Barnum brought Jumbo the elephant from London and offered $100,000 to anyone who could challenge that “Jumbo is the Largest & Heaviest Elephant ever seen by mortal man either wild or in captivity.” Elephants were typically highlighted in circus promotions and artifacts, and this was an era where complaints about their treatment were little heard.

The Emergence of Spectacle

Wittmann shows that the circus was, above all, a spectacle. Until at least the 1920’s, no other entertainment compared in excitement, color, and drama. Reading this book reminds us why the phrase “creating a circus atmosphere” emerged; the circus had so much going on at the same time under its tent or in its permanent buildings during winter that spectators could not look away for a second without fear of missing something great.

Wittmann captures the feelings of circus spectators in many ways, none more powerfully than in Weegee’s classic photos. I don’t recall if these circus photos are included in Weegee and Naked City or another of the photographer’s great books, but they really show the racial and ethnic diversity of circus crowds, and how all ages were equally captivated. The circus truly was “The Greatest Show on Earth,” and its pre-World War 2 innocence paralleled America’s.

It’s easy to see from the book why P.T. Barnum is often described as the father of American advertising. He really knew how to draw crowds, combining circus-related theatrics with amusements and what he called “curiosities.” In the pre-movie or television era, most could not see such attractions without attending one of Barnum’s venues, and crowds thronged to such events.

The Federal Arts Project under the New Deal provided jobs for circus performers and had a poster division to advertise the circus. The book has a stirring and rare photo of WPA circus personnel in Brooklyn, among the many graphics that elevates this book to a very special level. Later movie star Burt Lancaster performed acrobatics in the WPA circus, which was active from 1935-39 and entertained millions during the depths of the Depression.

The Ringling Brothers (who, as a poster shows, were in fact five brothers) picked up from Barnum, and brought the circus into the modern era. But television and films offered their own spectacles, and by the 1950’s the circus was no longer at the center of American culture.

There are two great mysteries associated with this book.

First, how did all these large circus banners and iconography from the mid-19th century through World War 2 get preserved in such great condition? Paper and cloth is easily damaged, and circus posters were promotional items torn down after closing. The sheer number of museums and private collections donating these items is astounding, and a tribute to the Bard Center for compiling them for a single show (and book).

The second mystery is how Yale University press can sell this book for only $40 retail. The color and clarity of the photos is of the highest quality, it contains beautiful artwork and images along with easy to follow text, and it is in a format that makes reading it while sitting in an easy chair a great delight.

This is the perfect gift for someone who enjoys popular American culture from the late 19th century through World War 2 (and they will think you spent at least twice the actual cost). Or buy it for yourself! I think readers will feel as grateful as I felt turning each page that Wittmann and his colleagues saved this critical part of American cultural history for today’s and future generations to appreciate.