How the 1 Percent Can Rebuild America 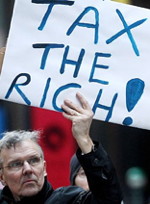 I am a member of the 1 percent. I’ve watched my income tax rates fall over my lifetime, from a top rate of 91 percent under President Dwight Eisenhower to the current low rate of 35 percent. When taxes were higher, this nation built a vibrant middle-class life for millions. Our schools, libraries, bridges, railways, and roads made the United States the envy of the world.

America has been good to my family. My grandfather was a Lithuanian immigrant who owned a general store in Waco, Texas. He helped my father start his business — the Tivoli Theatre in Fort Worth — during the Great Depression. Times were tough. Going to the movies was a way to escape and a ticket cost only a nickel. The business grew to a chain of eight independent theaters in Texas and Oklahoma. My dad invested the money he made wisely.

As tax rates have fallen, our schools, libraries, bridges, railways, and roads have begun to crumble. Millions of Americans have lost their jobs in this Great Recession. Congress continues to resist raising taxes on the wealthy, even though those higher taxes could create the jobs and rebuild the infrastructure that this country so desperately needs.

The 1 percent made billions of dollars during the boom years. Each time Congress reduced the tax rates, we made even more. When President George W. Bush took office, the top income tax rate was just under 40 percent. Congress cut it to 35 percent. Moreoever, many wealthy Americans make a lot of money earning interest on investments, buying and selling stocks, and banking the dividends those stocks produce. Most of those financial gains are taxed at just 15 percent.

A few years ago, Warren Buffett vowed to give a million bucks to any Fortune 500 CEO who could prove he paid a higher tax rate than his secretary. Not one came forward.

Our government taxes work much more than it taxes wealth. What does that say about our values?

Even if tax rates for the 1 percent had been maintained at year-2000 levels, the wealthiest of us would pay more than we do now, but not as much as we should. Still, there would be several trillion dollars more in the nation’s treasury, and we 1-percenters would all still be rich.

Some of us get it. We’ve come together in groups like Patriotic Millionaires to make the case to Congress and the public that we should push those tax rates up to reasonable levels.

As long as Congress refuses to act, here’s a simple proposal: I call on other members of the 1 percent to come together to set up a temporary fund to be run by someone with a commitment to rebuilding America, someone like Warren Buffett or Melinda Gates. Those who like the idea would pay in the amount of money they’ve saved from the lower tax rates. The fund would be used to support our country’s long-term economic health, from infrastructure projects to making our schools energy-efficient. Other projects could help rebuild vibrant and green Main Streets.

This is properly the role of government, but government right now isn’t doing its job. Just imagine how many jobs we could create if we taxed ourselves as we should be taxed in a decent and fair society.

I believe others would join me in this effort. As more joined in, we millionaires and hopefully some billionaires could challenge others to do the same thing. This would prove that many rich people are ready and willing to raise taxes on themselves.

I was raised to understand that I am part of a privileged minority. I’m getting tired of standing out here by myself yelling, “Tax me!”

Susan Adelman is the owner of a small business, a social justice activist, and president of the Lucy and Isadore B. Adelman Foundation. This piece was first published at Common Dreams.