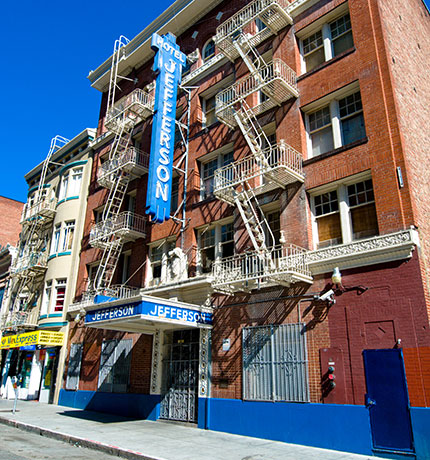 I wrote last week about the Tenderloin Housing Clinic’s success in preserving and improving San Francisco’s SRO hotels. By the 1980’s SROs were the city’s housing of last resort, and the Tenderloin was the last refuge for very low-income people.

But protecting SRO’s from conversion or demolition did not turn them into permanent housing. To the contrary, from 1983-1989 San Francisco transformed over 30 SROs and over 1000 rooms into 1-3 night shelters. This was just after we passed the law to prevent tourist conversions and now the city itself was  removing SROs from the permanent housing stock. Even worse,  turning SRO tenants homes into shelters made living conditions so difficult that the remaining longterm residents were essentially forced out.

City officials ignored the irony that they were depriving low-income tenants of the only housing they could afford by turning SROs into short-term shelters.

In 1987 I was part of a group of homeless advocates that formed to create a policy document for the next mayor. We called it the Coalition on Homelessness. (the forerunner of the current nonprofit). My big push was for the city to replace the hotline with a Modified Payments Program (MPP). The MPP would enable welfare recipients to  obtain permanent housing in hotels where they were currently limited to short-term stays.

I came up with the MPP plan due to a close relationship I formed with two hotel owners, Ramesh Patel and Raman Patel. Both felt that SRO operators could rent to permanent tenants at much lower rates if they did not have to fear evictions for nonpayment of rent. They said they would accept permanent residents at lower rents if a third party agreed to handle rent payments.

Under the MPP the welfare check comes as a two party check. The recipient signs the check with the rent going to the landlord and the tenant getting the balance. Both operators offered rents in the $260 a month range, far less than the off the street rate (Ramesh started the Jefferson program at $240 a month, quickly filling vacancies).

Mayor Agnos campaigned on a pledge to end the city’s hotline program so I anticipated his administration would support the MPP. It did, but there was a problem. As the new Human Services chief Julia Lopez memorably said to me, “It sounds like a great program but if we run it we’ll just screw it up. We need your office to run it.”

THC was exclusively a law office with two attorneys at 126 Hyde and two attorneys in our citywide eviction defense unit at another site. Running housing programs for the unhoused was never part of our plan.

But I had been working for years to return SROs to their historic role as permanent housing for low-income people and saw the MPP as the only way to do it. THC’s Board agreed to expand our mission and in 1988 we used foundation funds—-that’s how eager we were to prove to the city it would work– to start the MPP program.

Despite our success at securing low-cost SRO rooms, the Agnos Administration feared the impact of abruptly ending the hotline. The October 17, 1989 earthquake gave city officials the excuse they needed to close the hotline as the Anglo Hotel on 6th Street, exclusively used by the hotline, was destroyed by the quake (it was rebuilt as the Knox).

With the city now promoting the MPP, by early 1990 THC’s MPP program had nearly 1000 people and over 30 hotels. We successfully replaced the notorious hotline with a permanent housing program for welfare and SSI recipients.

The MPP worked great from 1989-1995. This was a rare period in modern San Francisco history where housing prices remained pretty much flat. But rents were starting to rise even before the late 1990’s dot-cot boom. Our SRO partners could not afford to keep rents at the $260-$280 a month levels we had maintained for years.

By 1996 we now problems obtaining rooms for $300. Considering the welfare grant was $340, we were limited in how much our tenants could pay.

The MPP also had problems with hotel operators getting our tenants to move in and then not adequately maintaining the building. We had legal remedies for tenants impacted (and filed lawsuits against some hotels) but once we saw repairs not being made we stopped making referrals to that hotel. So by 1996 we had reduced availability from both causes: some hotels were not meeting our standards while those maintaining our quality standards could attract tenants paying a lot more rent.

This led to the idea of nonprofits master leasing SROs for the unhoused. I saw leasing as the only way the city could continue housing welfare recipients. I negotiated the city’s first two master leases (the Pacific Bay Inn and Windsor Hotel) on behalf of the Department of Public Health; THC had no interest in becoming an SRO landlord.

But our desire to serve the needs of low-income people and restore SROs to permanent housing moved THC in an unexpected direction. The owners of the Seneca Hotel, 34 6th Street, really wanted THC to lease their hotel. They were having a very difficult time running the Seneca, which was the hotel giving our MPP the most rooms. I hated to lose that housing resource.  THC leasing the 204 room Seneca hotel seemed the only way to ensure its continued use for homeless welfare and SSI recipients.

So THC’s Board took the bold step of getting THC into the hotel leasing business.

We took over the Seneca on May 1, 1999. We had no idea what we were doing. We thought we would have time to figure it all out but in July, Mayor Brown asked me if I could find 350 rooms (the number of beds at Mission Rock shelter) to lease by September. Brown loved the master leasing program and encouraged its growth. At this moment he saw it as a way to close the Mission Rock shelter and move all its occupants into permanent SRO housing.

I liked the city’s plan to shift people (and homeless dollars) from shelters to housing.  I called my friend Ramesh Patel whose Jefferson Hotel had 111 rooms. He agreed to lease. I knew the Mission Hotel had a huge number of vacancies and called Sam Patel about leasing its 248 rooms. He also agreed.

In one day I got Willie Brown his 350 rooms (359 to be exact). I did this without really thinking how THC would handle the rapid expansion and it would be impossible for such a move to happen today (a case then of not knowing what you don’t know. Now we know).

So by September 1999 THC now was leasing three hotels with 563 rooms.  THC was firmly in the master leasing business. We now lease 23 hotels and have over 2500 tenants in our MPP program.

THC, along with CCDC, TNDC, Mercy Housing and other nonprofits, has enabled San Francisco to accomplish both goals. Master leasing dramatically expanded the scale of the SRO revival, and its success highlights a critical fact that is routinely overlooked: San Francisco has a master leasing program because we had SRO’s owned by Indian-American immigrants committed to housing the city’s poor.

THC leases all 23 SRO’s from members of the Indian-American community. That’s not a coincidence. Yes, it is a business decision to lease hotels. But all you need to do is look at what rents for-profit SROs are charging to realize that owners master leasing hotels are not maximizing profits by participating in city homeless programs.

THC’s longtime alliance with our SRO owners now spans generations. I am now dealing with the children of those we originally contracted with. And if things go as I hope, we’ll be dealing with the next generation of owners as well.

Through the city’s program, master leased hotels now join nonprofit owned SROs as bringing back the glory of the SROs of the 1907-30 era. And many have kitchens that the original SROs lacked. SROs have been restored to their historic splendor, including their historic neon signs.

Low-income people have had a hard time in San Francisco since the late 1970’s. But SRO’s have been a bright spot, and returning so many of them to their historic role as permanent housing is one of THC’s greatest legacies.