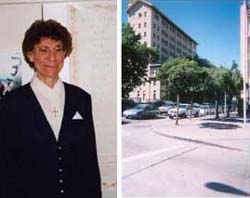 There will be a grand opening today at 150 Otis Street in San Francisco for Veteran Commons, a joint project to house homeless veterans led by the Chinatown Community Development Center and Swords to Ploughshares. Both groups deserve enormous credit for turning a rundown office building into beautiful housing. But if not for Sister Bernie Galvin’s activism, Veterans Commons would be market-rate condominiums, not housing for the homeless.

In January 2006, Beyond Chron recounted Galvin’s battle to convince the Newsom Administration to reverse its plan to sell 150 Otis to the highest bidder and instead save 150 Otis for homeless housing. In February 2007, I described Galvin’s ultimate victory as “an object lesson in persistence.”

Galvin did not save 150 Otis all by herself—-the Central City SRO Collaborative turned out people to hearings and Supervisor Ross Mirkarimi provided key political backing—but if she had not used her position on the city’s Surplus Property Committee to fight for 150 Otis, it would be condos today.

It’s not easy to take a stand against your fellow Committee members, but Galvin’s long commitment to housing homeless people—she founded Religious Witness with Homeless People—compelled her struggle to save 150 Otis for the very poor.

Galvin will not be at the 10:00am opening, as she now lives in St. Charles, Missouri. She told me this week that she’s very glad to hear that Veterans Commons is opening, and that homeless vets in San Francisco will have a roof over their heads.