How San Francisco is Changing, Block by Block 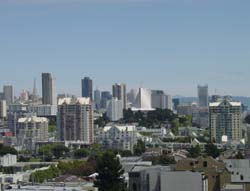 As the Board of Supervisors prepares to take up legislation that would dramatically alter the current debate over Ellis Act evictions, a small block in San Francisco’s Mission District is undergoing some major changes of its own. A real estate speculator recently purchased five buildings on a one-block stretch of Woodward Street, between Duboce and 14th Street, and quickly invoked the Ellis Act on every one. All the affected sites have between 6 and 12 units, and four of the five buildings have already been cleared of all their former tenants, many of which were seniors, disabled people, and families. Woodward Street presents a case study in how San Francisco is rapidly gentrifying due to the Ellis Act, as well as a prime example as to why the Board should stand behind Supervisor Aaron Peskin’s attempt to stop this trend.

Woodward Street used to be a quiet block in the North Mission, home to a diverse array of long-term tenants. The street’s character began changing dramatically, however, when speculator Benny Checuti became interested in it.

Checuti began buying buildings on the street several years ago, and quickly snapped up five multi-unit sites. It didn’t take long to become apparent the speculator had big plans for the area, and they didn’t involve making it a better place for the neighborhood’s renters.

Checuti invoked the Ellis Act on every one of his buildings, emptying four of the five of all of their tenants. Immigrants, families, disabled people and seniors were all victims of these evictions.

The tenants of the fifth building continue to fight their eviction, but face a tough battle. Checuti has scheduled almost constant construction in their homes, located at 55-63A Woodward, in an effort likely designed to displace them. Some of the construction was done without a permit, which the Department of Building Inspection cited Checuti for last week. While the citation stopped some of the work from continuing, it appears Checuti has plans to continue construction as soon as possible.

Checuti has also attempted to get many of the 9-unit building’s non-English speaking Latino tenants to sign documents agreeing to move out with little or no compensation.

The four buildings where successful evictions occurred have already been placed on the market as Tenancy in Commons (TICs). This strategy used by Checuti – invoking the Ellis Act to empty a building of long-term renters, then selling off the units as TICs – represents the exact practice legislation to be heard at tomorrow’s Board meeting will attempt to stop.

The Peskin-sponsored legislation would prevent TICs from ever entering the city’s lottery for conversion into condominiums if multiple evictions or the eviction of senior and disabled tenants occurred there. By eliminating the reason many homebuyers purchase TICs – because they belive they can eventually become condos – Peskin’s legislation would dramatically limit the number of Ellis Act and other no-fault evictions used by speculators to make a profit.

Woodward Street represents a perfect example of why this legislation is necessary. While it might seem like this type of eviction only occurs every so often in isolated locations, they are in fact happening at dramatic rates across the city. Taken as a whole, they’re causing widespread gentrification.

By being home to such a high concentration of Ellis Act evictions, Woodward street presents a microcosm of how this gentrification occurs. A block that was once a representation of San Francisco’s diversity, providing homes to seniors, immigrants, disabled people, and families, will soon become overrun by upper-class homeowners.

San Franciscans, and the Board of Supervisors who represent them, often claim they prize the diversity of this city and the unique character such diversity brings. Tomorrow, they will have a chance to prove it.