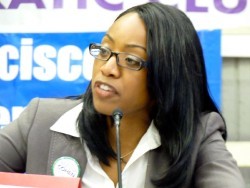 While there are still 1,000 absentees and 1,000 provisional ballots left to count in District 10, Beyond Chron is ready to call the Supervisor race for Malia Cohen. The Department of Elections ran a second unofficial Ranked Choice Voting (RCV) tabulation of counted ballots yesterday, and Cohen came out on top again. But the difference between Friday’s RCV count and yesterday’s tally showed how strong Cohen is as a candidate. A surge in late absentees for Marlene Tran had the practical effect of knocking Lynnette Sweet out of contention – helping Cohen to consolidate the second- and third-place votes of all the African-American candidates. Cohen surged in the RCV tabulation from fourth-place to first-place, because she picked up more votes from lesser candidates than her opponents. But her victory is also a lesson for those who hope to effectively use RCV when they run for office: if you want to be the “second-choice” of your opponent’s voters, it only helps if you are their clear and overwhelming favorite. Here are the details why …

When I reported on Monday where we were in the District 10 race, I predicted the ultimate winner would either be Lynnette Sweet or Malia Cohen. Why? Because in the end, the two candidates share more of the same supporters than with other major contenders. And when one gets eliminated, it would help the other beat Tony Kelly. Friday’s initial RCV count projected Cohen the winner, but the gap between Cohen and Sweet was too narrow to call the race.

Over the weekend, the late absentee ballot count saw a surge of Asian-American votes for Marlene Tran – which catapulted her from fifth- to second-place (before any ranked choices get re-distributed.) At the time, it was not clear to me who that helped – Tran had endorsed Tony Kelly as her second choice, but that didn’t mean her voters would follow. Now that we’ve had the second RCV tally, we know what it did was hurt Lynnette Sweet.

But what’s truly remarkable here is how Malia Cohen went from fourth-place before the Ranked Choice ballots were distributed (and only five votes ahead of Steven Moss), to defeating Kelly in the final round by 216 votes. It proves that Cohen was more effective at picking up second- and third-choice votes from other candidates, and a cursory look at the raw numbers (which the Department of Elections provides) clearly tells the story.

As lesser candidates were eliminated in the first nine passes of RCV, Cohen remained in fourth-place behind Kelly, Tran and Sweet. But as the votes for Ed Donaldson, Rodney Hampton, Ashley Rhodes and Steve Weber were all distributed, Cohen slowly but surely narrowed the gap – from 139 votes behind third-place, to 82, to 74, to 56 and to 9 votes. Meanwhile, DeWitt Lacy – down in seventh-place – was also gradually picking up votes.

Cohen’s first break happened after Eric Smith was eliminated, and his votes were re-distributed. During the final weeks of the campaign, Cohen and Smith endorsed each other for second-place – even going so far as to having joint pieces of literature with the candidates wearing Giants hats, and urging a vote for the “District 10 team.” Kelly also got a lot of votes from Smith, but this joint-campaign put Cohen in striking distance of Sweet. Chris Jackson’s voters also helped Cohen – and gave Lacy a bump that paid dividends later.

On the fourteenth pass of RCV, we saw a little “hiccup” in Cohen’s path to victory – as Teresa Duque’s votes were re-distributed. Her Asian-American voters overwhelmingly favored Marlene Tran – catapulting her into first place. That hurt Cohen, but it also hurt Sweet and Kelly. When the dust settled, Cohen was now only 15 votes behind Sweet – and with no more Asian-American candidates left, Tran had nowhere to go but down.

That’s when the coup de grace happened for Malia Cohen. The next candidate to be eliminated was DeWitt Lacy, who like Cohen had been slowly picking up votes. The SF Democratic Party had recommended a #1 vote for Lacy and a #2 vote for Cohen, so now Cohen was the overwhelming beneficiary. According to the unofficial RCV tally, 447 of Lacy’s votes went to Cohen – with 141 for Sweet and 171 for Kelly. That transfer alone propelled Cohen from fourth-place to second-place, and 291 votes ahead of Sweet.

Steve Moss was the next one to have his votes re-distributed. With his white Potrero Hill base, one would expect Tony Kelly to be the biggest beneficiary – and indeed, he did get the largest number of Moss’ votes. But here is where we learn about the effectiveness of Ranked Choice Voting – in order to really be “helped” by another candidate’s second- or third-choice votes, you need to ensure that other remaining candidates don’t also pick up many votes. Kelly picked up 480 from Moss, but Cohen got 241 – allowing to keep her in the game.

Now, Cohen was only 50 votes behind Kelly – and the next candidate to go was Lynnette Sweet. 531 of Sweet’s votes went to Cohen, compared with only 175 to Kelly and 89 to Tran. This margin propelled Cohen into a lead for the first time, with Tran in third place.

As I mentioned earlier, Marlene Tran had endorsed Tony Kelly for second place – which would make one believe that Kelly would now benefit. But looking at who Tran’s voters preferred, Kelly would have needed a far better point-spread to overcome Cohen’s lead. Tran’s votes narrowed the gap between Cohen and Kelly, but Cohen still came out ahead.

In other words, Malia Cohen benefited the most by being a popular second or third-place choice among District 10 voters – allowing her to come out ahead of Kelly, Sweet and Tran. She owes this to much of the progressive African-American community, whose candidates and their voters had the foresight to place her in one of their ranked choices.

While it’s very important that every single vote be counted, based on where these votes are from I do not expect the outcome to change. The real story here was how Ranked Choice Voting propelled Malia Cohen to becoming the next District 10 Supervisor.