How Popular is the Tea Party Movement? 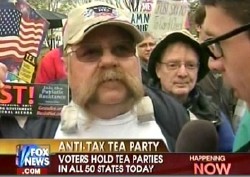 The Des Moines Register reports: “A third of Iowans from across the political spectrum say they support the ‘tea party’ movement, sounding a loud chorus of dissatisfaction with government, according to The Des Moines Register’s new Iowa Poll.” But how loud a chorus is this, really? 55 percent of Americans say they’re personally protected by a guardian angel. 38 percent of Americans have a favorable view of Cuba and 36 percent are favorably disposed toward socialism, but I don’t see anyone writing newspaper articles about how a populist wave of socialism is sweeping the country. The number of Iowans who like the tea party movement is smaller than the number of Americans who want marijuana legalized or the number of Americans who believe the government has had secret contact with extra-terrestrials.

Polls register largish minorities of the population as saying all kinds of things. It’s very hard to know what to make of any of those polls as snapshots without some kind of context and duration over time. Do people even know what the “tea party” movement is? Do the people showing up to the tea parties? I’ve previously discussed my encounter with a tea partier who likes freedom so much that she waves a flag endorsing chattel slavery. I take it that’s not the main thrust of the movement, but obviously there’s a mish-mash of sentiments represented by the attendees.

This piece was first published at the Think Progress blog.