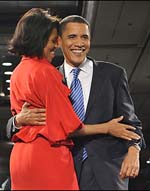 The story of Super Tuesday 2008 is really quite simple. The Clinton campaign assumed several months ago that it could knock its competitors out of the race through big wins in New York, California, Massachusetts and New Jersey. It seemed to forget that the rules for apportioning delegates undermined this “big state” strategy, and by bypassing campaigning in a large number of other states, Clinton allowed Obama to rack up huge delegate percentages in places like Idaho and North Dakota. Obama better understood the rules of the game, and took advantage of Clinton’s ceding of states and delegates. Those complaining about Obama’s lack of focus on California and the large states learned last night why this strategy made so much sense. For example, according to Obama campaign manager David Plouffe, Obama will take 23 of Kansas’ 32 delegates, and 46 of Minnesota’s 72. While the media was obsessed with Clinton’s victory in New York, between that state and Obama’s home base in Illinois, Obama will end up with 15 more delegates. For Obama to win 13 or 14 of the 22 states was inconceivable only a few weeks ago, and having overcome the steep challenge of Super Tuesday, he now heads toward a string of states where he is likely to prevail.

Media coverage of Super Tuesday seemed as confused as the Clinton campaign about the rules of the contest. As much as commentators emphasized Clinton’s victories in “delegate rich” New York and California, they ignored the fact that the congressional district-based delegate selection rules largely prevented Clinton from translating her popular vote success into large delegate hauls.

Obama understood this well. On a conference call last night when Obama was trailing badly in Missouri, campaign chief David Plouffe told us that Minnesota—a caucus state that Clinton ignored— would deliver more delegates to Obama then Hillary would win in hard-fought Missouri.

He was righter than he thought. Obama staged a remarkable comeback victory to win Missouri, so he will get the benefit of a slight majority of that state’s delegates in addition to his huge edge in Minnesota.

In state after state, Clinton made little or no effort to prevent Obama from winning high percentages of delegates. Again, if the rules prioritized large states this strategy would make sense, but the rules reward the opposite.

Some say that Clinton avoided caucus states because she knew she would lose. But she did win the popular vote in the Nevada caucuses, and it is hard to believe that she could not have worked to reduce Obama’s huge victory margin in states like Colorado and Minnesota.

Clinton not only erred in putting all her eggs in the basket of a few large states, but she also failed to use Super Tuesday to prove she could expand the Democrats’s general election base. She did win Oklahoma and Tennessee, but the other states she won, with the possible exception of Arizona, are very blue states.

Obama, in contrast, sent a message that he could be competitive in the entire Rocky Mountain region, and potentially in some Southern states. At the very least he showed that, unlike Clinton, he has a chance with these voters.

When word got out that New York’s Latinos had gone for Hillary by a 72% margin, it sent a troubling message for what could befall Obama in the west and southwest. But Obama won Colorado in a landslide, won 44% of the Latino vote in Arizona, and is proving competitive in heavily-Latino New Mexico.

But before everyone starts talking about Obama’s “Latino problem” and how he must change this electoral dynamic, consider that the next several primaries and caucuses involve few Latino voters. So a linchpin of Clinton’s electoral success will not be available to help her in the coming weeks.

Now that McCain has virtually cinched the Republican nomination, Democratic primary voters in upcoming states are likely to focus more on which candidate matches up best against him. Obama’s speech last night targeted this theme, as he noted that voters will want a candidate who can distinguish themselves from McCain by saying that they opposed the Iraq war from the start, and that they never voted to give Bush the “benefit of the doubt” on Iran.

Clinton’s two selling points—experience and the ability to serve effectively on “day one”—are both neutralized against McCain, and Obama is likely to keep pointing this out in the days ahead.

Women voters were key to Clinton’s large victories in New York, Massachusetts, and California, where she beat Obama among women 59-34%. But if you look at the next several contests, only Washington’s caucuses have the potential to see such a strong gap (both of the states Senators and its Governor are women).

Unable to count on winning large margins of women, and with the Latino voter not a factor, Clinton faces an uphill battle to win the upcoming contests in Louisiana and the “Beltway” states of Maryland, Virginia and Washington D.C. I’m told that Obama is likely to win the Washington caucuses on Saturday, the gender gap notwithstanding.

“Our Time Has Come”

Obama gave a powerful speech last night asserting that the time has come to break from the past, and to recognize that “we are the ones we’ve been waiting for.”
Expect him to be more critical of Clinton, more hard-hitting, and to sharpen the differences between them in the weeks ahead.

I predicted on Monday that Obama would come out of Super Tuesday the frontrunner, and he won more states than anyone predicted. If Clinton cannot figure out a way to stem this tide in the next two weeks, it will be too late for states she is counting upon like Ohio and Texas to rescue her.