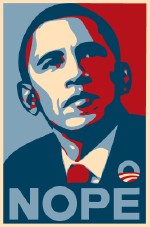 President Obama’s high-profile surrender to Republican economic policies is only the latest in a long line of betrayals of his 2008 campaign for change we can believe in. Less known is the Obama Administration’s implementation of conservative policies through administrative acts. For example, last week Federal District Court Judge Joseph Spero ruled that regulations issued by the United States Department of Transportation (DOT) — no matter how weak and ineffective — strip away the rights California residents with visual impairments to access and use JetBlue’s website and airport kiosks. The court followed a prior judicial ruling on a case involving United Airlines, in which Obama’s DOT affirmatively sided with large corporations against people with disabilities. Further, while immigrant rights activists have criticized the record 300,000 deportations under Obama, less known is that in 2009 the President quietly signed legislation allowing his Justice Department to retroactively charge nearly 400,000 immigrants from El Salvador, Nicaragua and Honduras processing fees above the amount set by Congress. This was after a court was prepared to reimburse immigrants for the overcharges. And while we hear about Republicans opposing various judicial nominees, Obama is so content with the Bush dominated federal courts that he has allowed a record number of judicial vacancies to persist without a public fight.

It’s not pleasant to make progressives feel even worse about Barack Obama, but the more one learns the worse his record looks. Consider Obama’s use of administrative rule-making powers.

On the positive side, the Obama administration has used administrative regulations to further environmental protection, and used labor regulations to help workers (though not with the frequency that many of his supporters expected).

But as was clear with the Justice Department’s longstanding defense of “Don’t Ask, Don’t Tell,” the Obama Administration is hardly offering the dramatic break from the past that activists expected. There are many examples to choose from in proving this point, but two recent court rulings against people with disabilities — both based entirely on Obama’s DOT regulations — show just how far the President has strayed from his 2008 campaign messaging.

In the JetBlue and United cases, the judges ruled that DOT regulations about websites and kiosks preempted California’s strong laws even though those regulations are weak and don’t require accessible websites or kiosks. In the United case, the federal DOT actually wrote to the court agreeing with United’s position that the case should be dismissed.

While the rulings only affect websites or kiosk accessibility for airlines, many wonder why the Obama Administration is slamming the door on the rights of people with disabilities to full inclusion in services or programs offered by one of the nation’s leading industries.

The Courts in both the JetBlue and United cases found that the U.S. Department of Transportation had issued pervasive regulations on airline kiosk accessibility, yet those regulations do not require access. Instead, the regulations simply tell airlines that if their kiosks are not accessible, they must provide some unspecified form of “assistance” to customers with disabilities.

Further, the DOT has thus far refused to require accessible websites, bowing to industry pressure to delay effective regulations. The Judge in the JetBlue case found that the DOT “considered a proposal that would require air carriers to make their websites accessible to the visually impaired, but comments from air carriers and air carrier organizations that such a rule would be too difficult and expensive led the DOT to ‘defer final action’ on the proposal and seek additional comments on the matter.”

California has many civil rights laws that are stronger than the federal government’s, which is why large corporations regularly push measures to create weaker federal standards to preempt strong state laws. This was standard procedure in the Bush Administration, but activists expected a different approach from Obama (and I only know of these little known cases because my wife was an attorney representing blind plaintiffs in the JetBlue case).

In addition to failing to enact immigration reform and his deplorable record on deportations, Obama is also creating unexpected hardships for immigrants legally in the United States.

In 1990, Congress established the Temporary Protected Status (TPS) program to allow nationals from designated countries that are experiencing “ongoing armed conflict, environmental disaster, or other extraordinary and temporary conditions” to remain in the United States and obtain work authorization documents. Nationals from a TPS state must register for the TPS program when their country is initially designated for TPS, and they have to re-register whenever their country’s designation is extended.

The law establishing the TPS program limited the amount the Government could charge for TPS registration to $50 per person.

Congress set the fee cap low in order to reduce the financial burden of applying for TPS on Central American immigrants who could not return to their home country because of civil strife or natural disaster, and to encourage as may people who were eligible as possible to apply for TPS. Additionally, Congress did not authorize the Government to charge any additional fees to re-register aliens when their country of origin’s TPS designation was extended.

By April 30, 2004, the Department of Homeland Security (DHS) expanded its TPS registration requirements to include the submission of biometric information (i.e., fingerprints, photographs, and signatures), and increased the “biometric services fee” to $70, then $80, and now $85. The Attorney General and DHS charged these fees without getting Congress to amend the $50 registration fee cap in the TPS statute.

Seems like a clear violation of federal law, right? Well, many immigrants forced to pay the illegally high fee felt so, and in 2007 a nationwide class of TPS registrants from El Salvador, Nicaragua and Honduras filed a lawsuit against DHS and the Department of Justice (Bautista-Perez v. Eric Holder, et al)
for unlawful collection of fingerprinting and biometric services fees. The case was assigned to United States District Court Judge Thelton E. Henderson, who indicated in early proceedings in the case that he was inclined to find that the Government was violating the TPS statute by collecting fingerprinting and biometric services fees. The class of about 400,000 nationals from El Salvador, Nicaragua and Honduras was certified in the summer of 2009, and the class brought a motion for summary judgment before Judge Henderson in the Fall of 2009.

The motion was set for hearing on October 26, 2009. In early October, the Government’s attorneys from the Obama Justice Department asked the court to move the hearing to November 23, 2009 because of the attorneys’ workload. The court granted the request.

But in an act more associated with the duplicitous Bush Justice Department, the delay was apparently sought to give time for the President to get the law changed. Retroactively! The new law allowed the previously illegal charges that had been the basis of the lawsuit.

On October 28, 2009, former constitutional law scholar now President Barack Obama President signed into law the DHS appropriations bill for 2010, a 50 plus page bill that included “Section 549,” which stated that “In addition to collection of registration fees . . . fees for fingerprinting services, biometric services, and other necessary services may be collected when administering the program.” The new law was expressly “construed to apply for fiscal year 1998 and each fiscal year thereafter.”

The DHS inserted this provision in the appropriations bill in June 2009, but it was taken out by the full House. It was slipped back in during the Conference Committee and approved in late October. Because the law was retroactive, it wiped out the immigrants’ claims for relief and their lawsuit was thrown out of court.

Finally, it’s worth noting that another little discussed Obama Administration failure concerns the record judicial vacancy crisis. All those who believe that judicial appointments shape the nation’s future should examine Obama’s failure to make such confirmations a priority. He refuses to publicly demand “up and down” votes on proposed nominees, despite promising to wage such a fight.

If Citizens United, WalMart and other right-wing judicial decisions have not motivated Obama to make judicial appointments a priority, there’s little reason to expect any improvement during a potential Obama second term.