How McTeacher’s Nights and Coke Science Betray Us 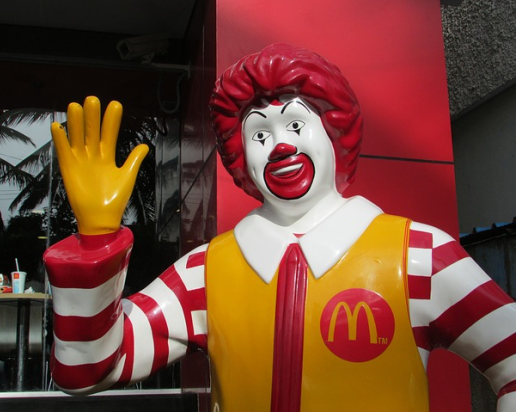 The National Education Association (NEA) and chapters of the American Federation of Teachers (AFT) have just announced that they are calling on McDonald’s to end McTeacher’s Nights. Together, these unions represent more than 3 million teachers, principals, school nurses and education policy experts nationwide.

McTeacher’s Nights use school staff to work at McDonald’s in exchange for a portion of the sales.  This gives McDonald’s free labor and the kind of marketing money can’t buy, while students are left thinking that their teachers endorse McDonald’s burgers, sodas, and fries.

At a time when 34 percent of children and adolescents eat fast food on a given day, we need schools helping families to break the fast food habit, instead of encouraging it.

We also need pediatricians helping families break the soda habit, and the American Academy of Pediatrics (AAP) recently announced it was ending its relationship with Coca-Cola.  This came after the New York Times ran a piece about how Coca-Cola funds scientists who shift the blame for obesity away from bad diets.

In March I had written about the problem of AAP taking money from Coca-Cola and called it “When the Experts Fail Us“.  It’s a relief that six months later, it’s no longer acceptable for this organization to accept soda sponsorship.

Both of these moves by teacher and pediatrician groups are critical to reversing the epidemic of chronic disease. Rising rates of diabetes, heart disease, obesity, and non-alcoholic fatty liver disease have focused public health attention on the connections to fast food and soda.

Coca-Cola and McDonald’s have responded by trying to shift blame away from their products, instead putting the focus on physical activity. This tactic explains why it’s been difficult to find a 5K to run with my children that was free of soda and fast food marketing.  It also explains why we see Coca-Cola using sports to sell soda the way Virginia Slims used tennis to sell cigarettes.

When Coca-Cola funds scientists to shift attention away from diet, this also helps McDonald’s get its marketing into schools.  Instead of seeing Ronald McDonald as the Joe Camel of fast food, he’s allowed into school assemblies under the guise of promoting exercise.  McDonald’s uses schools in order to reach students when their parents aren’t around.  This has become such a contentious issue that some have even gone so far as to attend the shareholders’ meetings in order to make personal pleas for it to stop.

When questioned by mothers at its 2014 shareholders’ meeting, McDonald’s publicly denied putting Ronald in schools, despite the fact that their own web sites advertise Ronald’s presence in schools.

An international coalition of advocacy groups responded with a petition urging McDonald’s CEO to make good on his word and ban Ronald from schools.  McDonald’s continues to brush off these concerns and on its December 2014 investor call, McDonald’s USA president Mike Andres said, “We have to get McDonald’s owner-operators into schools.” Also during that call, Andres called a presence in schools the brand’s “heritage.”

McDonald’s calls marketing to children its heritage, but it comes at too high of a cost to their health.

Children ages 6-11 years old see ten times as many ads for McDonald’s than for its nearest competitors.  McDonald’s is the only member of the Children’s Food and Beverage Advertising Initiative that refuses to make a pledge not to advertise to children under 6 years old.  The fast food giant takes a duplicitous approach to children’s health when it puts large soda ads on its PlayPlace windows.

“Yet even in the midst of a childhood obesity epidemic, 540 Meals irresponsibly encourages notoriously impulsive pre-teen and teenaged kids to frequent McDonald’s – with all of its powerful sensory cues and unhealthful offerings – even more often than they already do.”

McDonald’s and Coca-Cola have been helping each other grow their empires since 1955, but recently they have both been suffering from slipping sales. In a desperate attempt to stop the bleeding, Coca-Cola and McDonald’s have partnered on a Twitter campaign to give away free Cokes in Mexico after using social media to give away one million free Cokes in Brazil. It reminded me of when tobacco corporations started feeling the heat and resorted to giving away free cigarettes.

More people are starting to see how the soda and fast food industries are following the tobacco industry’s playbook.  As Marion Nestle explained:

The word betrayal struck a chord with me as a parent because seeing Coca-Cola use pediatricians, and McDonald’s use teachers, was even more disheartening than their awful marketing lies.

It is time to right these wrongs, and I applaud the pediatricians and teachers who have taken a stand for children’s health by saying “No more.” Public health experts have worked for decades to counter soda and fast food’s marketing lies with the honest truth, and now that arc is finally bending towards justice.