How McCain Imploded: Campaigning as Recklessly as Bush Governed 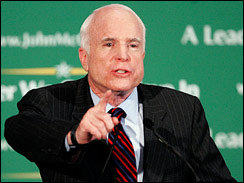 Republican partisans grumble that John McCain never had a chance, victimized by big money, a hostile media, a Democratic year, and “outside” forces beyond his control. Does this array explain the shocking loss of GOP strongholds North Carolina, Iowa and Indiana? Or why this certain loser trailed Barack Obama by two points at the second Presidential Debate?

Recessions and meltdowns are not “outside” politics, nor are media mistakes or fundraising gaps. What apologists devalue is the pattern of inside blunders that typified McCain’s campaign, lurching from crisis to crisis, driven by self-inflicted wounds. Eventually, voters saw an explicit, if unintended narrative: McCain adopted not just Bush’s bravado and policies, but campaigned as recklessly and irresponsibly as the disgraced President governed.

Still, mysteries abound. Why did McCain not break from a Bush so toxic stump appearances were taboo? Why did McCain, despite trying, never master the GOP dirty trick Attack Machine? Why did the loser caricature his own 2000 run, ending ’08 in vaudeville farce? Neither Wall Street, Iraq, nor Obama torpedoed McCain’s chances like internal howlers, triumphs of bonehead magic thinking over sense or strategy.

Afterwards, McCain conceded to David Letterman: “I screwed up,” conceding one error. But McCain’s campaign was a sustained screw-up, offending moderates disgusted with Bush, alienating women from Sarah Palin and blue-collar workers from Joe the Plumber. Fully disclosed, McCain’s character was indeed his destiny, his expectedly large defeat caused not by the stars but manifest unreadiness for office.

First mystery: why with five months to decide did McCain settle on Gov. Palin — unvetted, unprepared and quickly unreal? Why pick a strident outlier from peculiar Alaska, whose very affluence relied on high gas prices devastating everyone else? Within weeks, Palin’s crash landing left only two possibilities: McCain chose Palin knowing who she was, thus committing malfeasance. Or worse, he was ignorant of her past and person, showing himself the high-risk gambler betting the country’s future on misplaced magic thinking and gut instinct. Either way, McCain invoked Bush identify politics, though less well done.

Palin the right-winger aside, was not the center everything? If so, why did the “maverick- change-reformer” rush to the most cynical, divisive, Rove-like playbook? Did McCain miss Obama’s upset primary win or ’06 rejection of the status quo? Why make Palin the brash “Bush in a skirt,” so mocking, condescending and divisive? Why choose an attack dog inept at interviews or public debate, humiliated by a clothes’ scandal that undercut her hockey-mom image?

Notably, what the winking Palin signaled was the campaign’s eagerness to fuse limitless audacity with make-believe, as if anything goes, tactics made up as you go along. Thus, Palin’s record was invented, then reinvented at will, as if brashness offset Alaskan judgments about “abuse of office.” Gaffe after gaffe, Palin discredited our own modest talents more than any “outside” opponent, reinforcing what McCain could ill afford: kinship with a White House known for bluster, fantasy, denial, and stonewalling.

When the credit meltdown came, McCain predictably recited GOP bromides, crudely verifying Obama’s headlines: McCain is McBush. McCain was not the first clueless Republican on economics, but why reinforce incompetence by falsely “suspending” the campaign? Added to what Palin didn’t know, this shocker verified what McCain didn’t know. Was this an outside “ambush” by uncontrollable variables or an inside job, damage by implosion? After all, wouldn’t any true “reformer-change” candidate leverage a crisis to show off credentials? Instead, McCain layered Bush’s stubborn obliviousness with inexplicably weak ploys spotlighting his own flaws.

Other than not being Obama, McCain was failing his core task: win over non-GOP base voters. McCain’s ad campaign offered neither vision nor agenda, obsessively focusing on a cartoon Obama tied to a cartoon ’60’s terrorist. Empty name-calling (Obama the celebrity, elitist, tax-and-spend liberal, not one of us, even subversive) never equalled Rove’s targeted, well-executed dirty tricks. Thus, Ayers never worked: guilt by association needs clarity about the source crime plus direct linkages. Likewise with divisively splitting “real” from unreal Americas, or empty contrivances McCain and Palin as just plain folks — more tin-ear misplays. Executing the wrong dirty tricks the wrong way reversed the GOP message, “anyone but Obama,” morphed into “anyone but McCain.”

Then along came Joe, McCain’s wholly self-inflicted train wreck promoting the most outlandish fairy tale of all: millionaire McCain with multiple houses was soul brother to a mouthy hustler, a PT Barnum in overalls. Beyond Palin or Ayers, Joe exploded as full-fledged cartoon joke — a debtor without license or taxable business — or credibility. Joe’s bizarre comedy finished the McCain vaudeville farce, and this second, badly vetted figure never stayed on message. Afterwards, Joe verified what the deluded senator missed: Joe was no McCain fan, indeed “appalled” by the campaign.

Desperate for a real economic platform, McCain punted, turning Joe’s name into platitude platform ad nauseam. The charade crashed late in October at a rally: McCain repeatedly called out, only to find GOP Joe missing in action. No better snapshot captures the full McCain implosion: staff ineptitude, over-reach, and fantasy, the invented “hero” on the lamb, the stage-show gag falling of its own weight. An insular, pathetic, tightly smiling McCain blustered on, “okay, everyone is Joe the Plumber.”

McCain-Palin, the Audacity of Failure

McCain defenders blame defeat on Bush fatigue and bad luck, but who embraced W., approved Palin, suspended campaigning, squandered ad millions, and hugged Joe the Plumber, by the end a cross between Jack in the Box and Pinocchio? What “outside forces” damaged McCain more than self-induced gimmicks turned failed stunts? Did any McCain decision after the primary offset his sequential implosions?

Whatever the original odds against him, McCain’s sorry campaign helped elect the new president, padding large popular and Electoral College margins. Ultimately, McCain bought the delusion he could be Bush and not Bush, strident rightwing Republican and a bold centrist maverick, slave to Bush operatives yet master of his own campaign. Needing a flawless campaign, McCain showed how not to run for president.

After such a defeat, savvy Republicans would sensibly flee the last eight years and/or McCain’s campaign approach. However, like McCain, the leading 2012 GOP contender, Sarah Palin, is not shy about tall tales, self-aggrandizement, or high-risk gambles. She’s the most likely candidate to embrace the Bush years and look with nostalgia on her opening national gambit. With that, we return to “anything goes” campaigning and the unsettling, self-defeating fusion of unrestrained audacity married to magic thinking. Figure Obama for eight years.