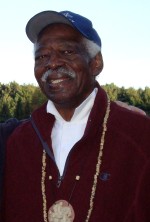 Leroy Looper passed away on September 11, 2011 after making lasting contributions to San Francisco’s future. He turned the rundown Cadillac Hotel in the heart of the Tenderloin into a national model for the potential of single-room occupancy hotels (SROs), and it is doubtful that much of San Francisco’s SRO housing stock would exist today but for Looper’s vision. By investing in the Tenderloin in 1977, when the community was in the midst of a decade-long decline, and then encouraging others to do so, Looper laid the groundwork for the neighborhood’s revitalization. And it was due to his particular genius that Looper was able to convince powerful politicians and economic interests that preserving the Tenderloin as a low-income residential neighborhood was in the city’s larger interest, which is how the historic rezoning of the community was enacted in 1985. I was blessed to meet Leroy in 1979 and to spend over thirty years learning from him. He would want me to use his death not to discuss his achievements, but instead to impart the lessons of activism and community building that he long preached. I will do both, as Leroy Looper always evaluated his accomplishments by their positive impact on others.

I met Leroy Looper in the fall of 1979 when I was part of a small group of Hastings Law students that wanted to open a legal clinic in the Tenderloin. Concerned about our outsider status, we were told that we should meet with a man named Leroy Looper at the Cadillac Hotel to get his approval for our plans.

It was clear that Leroy came from an entirely different world than we knew. It was the world of riding trains with fellow hobos in the 1940’s, of being a street addict and alcoholic in Harlem, and of spending time in prison. When you think of the term “street smart,” that was Leroy Looper. Leroy liked to say that he got his education in the “real” world, and that became clear as he gave us feedback on our plans to help tenants in the Tenderloin.

Leroy could have played the “localities” game and told us to stay the heck out of “his” community. He could have seen us as causing him problems down the line, or of cutting into his “turf.”

But Leroy did the opposite. He was so enthusiastic about our plans that we felt it was our duty to proceed. For me, it was the beginning of a relationship where I always tried to live up to Leroy’s ideals. We opened the Tenderloin Housing Clinic (THC) soon after getting his go-ahead.

Soon after Looper successfully renovated the dilapidated Cadillac into the city’s most prized SRO around 1979, he began holding an annual party with food, music and festivities. I recall being shocked by the attendees, who included prominent politicians, city officials, property owners and others whose political views I opposed and knew Leroy did not share.

During one of our ongoing strategy discussions in his Cadillac office, Looper explained –and I still remember his exact words – “we’ve got too many problems in the Tenderloin to be fighting with each other. We need to all get along. I don’t have to love people I’m working with or even like them (he laughed), but we need to keep everyone together to get things done.”

Leroy was not suggesting that THC moderate its aggressive advocacy for tenants. Rather, Looper meant was that we should work together with people on issues where we agree and not let our differences on some issues interfere with collaboration on others.

For the Tenderloin, Looper’s approach meant that Mayor Dianne Feinstein, not known as a great ally of tenants or low-income communities, signed the rezoning law in 1985 that preserved the community’s low-income residential status. Leroy always maintained good relations with Feinstein (she came to the Cadillac parties), and there is no question in my mind that the goodwill she felt toward Leroy was critical to her support for the neighborhood (Leroy was a sponsor of the rezoning, which dramatically reduced the value of the Cadillac by lowering height limits from 40 to 8 stories).

Many activists look for the one point of disagreement to justify avoiding collaboration on other issues, and then fail to assemble the broad enough coalition necessary for success. In contrast, Leroy always urged that we find points of agreement and move forward from there, which explains why so many “unusual” suspects backed his plans.

Leroy never left anything to chance. To ensure that the people in the Tenderloin he wanted to work together did so, Leroy spent his time at events grabbing people and putting them together. And he never stopped reminding people about commitments, upcoming events, or any work that needed to be done – he embodied legendary organizer Fred Ross’ axiom that “reminding is the essence of organizing.”

In fact, the last time I spoke with Leroy was at an event we had with Mayor Ed Lee to celebrate the restoration of five historic advertising murals in the Tenderloin. Leroy and Ed have known each other for decades, but rather than talk about the past Leroy kept reminding the mayor about the monthly Cadillac concerts and urged him to attend (Lee has previously attended but Leroy didn’t want him to miss the next one)

When Leroy bought the Cadillac Hotel in 1977, there was not a single SRO in San Francisco that offered a positive model for preserving such housing. The mass evictions at the International Hotel and the demolition of thousands of SRO units through South of Market redevelopment showed that preserving SROs was not a political priority in San Francisco.

The Cadillac showed how preserving SROs made sense for a city struggling to house its poorest residents, and that these buildings were grand structures worthy of historic preservation. During the early 1980’s North of Market Planning Coalition Director Brad Paul lived at the Cadillac, and he regularly brought city officials, bankers, foundation staff and other influential people through the building.

When people saw how great SROs could be, attitudes toward preserving these units began to change. And so did city officials’ appreciation of SROs as a resource for providing permanent housing for participants in city homeless programs. The now widely accepted policy of “supportive housing” first began at the Cadillac.

Would San Francisco have enacted an anti-conversion and demolition ordinance for SROs had Leroy not created the Cadillac as a model? Fortunately, we do not have to speculate, but I do know that during the battles over SRO protections in 1980 and beyond we always pointed to the Cadillac as an example of what we were trying to save.

As a former heroin addict, alcoholic and convict, Leroy understood the value of giving people like himself a second chance. He dedicated his life to this goal, and turned around the lives of countless people society was otherwise prepared to discard.

In the last talk he gave before collapsing last Wednesday night, Leroy was trying to convince Antioch College alumni to revive the San Francisco program where he had once enrolled. Leroy always felt that early mistakes in life should not be permanent setbacks, and used himself as the best example.

Looper Lesson #5: Do What You Love

Leroy created the drug rehabilitation programs Reality House East and West, recreated the Cadillac, convinced people to help revive the Tenderloin, and served on the national Board of Youth Build as well as on many local nonprofit boards. He did this not out of any sense of duty or obligation but because he loved helping people. Nothing made him happier than to hear that someone in one of his programs got a job, or that one of the many groups he helped create was succeeding.

Like all of us, Leroy had his down times. He took the failure of the Sizzler restaurant at the Cadillac in the early 1990’s very hard, both because he had hoped it would provide a longtime financial subsidy for the hotel and because he was a remarkably savvy guy who rarely saw his plans fall short. As time passed Leroy recognized that opening a restaurant on the eve of the nation’s unexpected 1987 financial collapse was a case of unfortunate timing beyond anyone’s control.

To his last breath, Leroy Looper loved his work and his life. He leaves a large family and his wife, Kathy, who never seeks credit for anything but was his close partner in ushering in the Tenderloin’s revival.

Beyond Chron has Leroy Looper’s autobiography on line, and it is a gripping read. I highly recommend it. Nearly all of Leroy’s television appearances are on dvd, and there are photos of him with visitors to the Cadillac like Governor Jerry Brown (during his first stint) and a very youthful looking Willie Brown.

Leroy loved attending the Concerts at the Cadillac. His family has requested that donations in his honor be mailed to the Cadillac at 380 Eddy Street, 94102 specifying “Concerts” in the subject line. A memorial service will be held in his honor at the Cadillac on October 5 beginning at 5pm; there will be more details on the event as it nears.

The Tenderloin Housing Clinic, publisher of Beyond Chron, would not exist without Leroy Looper’s initial support. On behalf of all of our board and staff we extend our deepest condolences to the Looper family, and our appreciation for all that Leroy did to make the world a better place. His legacy will never be forgotten.