How I Remember Howard Zinn

by Jamie Sanbonmatsu on February 1, 2010 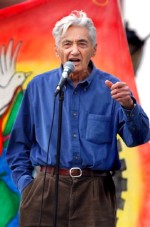 Boston University of the late 1980s was a far cry from its anti-war past of the 1960s. I was unaware that BU’s President, John Silber, had stocked the place with hard-core conservatives at the School of Management & installed a former Gestapo agent as head of the Communications school. One day during my first semester, I had joined in a procession to commemorate victims of South African apartheid. Several large dudes with no necks screamed “loser” in my face, just for walking & participating in the event.

I was on the verge of transferring, when a teaching assistant – offering me a beer in his office – told me to drop International Relations & sign up for Howard Zinn’s class. So the next day, I showed up at this multiplex movie theater for Introduction to Political Theory. There were four theaters in the Nickeleon complex on campus, and Howard’s class was scheduled for the smallest of the four, which was a total joke. There was no way to cram all the people who showed up, into that small room.

“We’re moving to the larger theater,” he said. “Meet you all over there.”

Even in the larger space, all the seats were filled, and students were sitting on the floor in the aisles & by his feet. He said, “How many of you are trying to add this class?” Then he corrected himself, “Actually, how many are officially supposed to be here?” It was less than half.

“I suppose you all want me to sign your add/drop slips,” he said. “Why don’t we try it this way?” Then he turned to the large blackboard & signed his name. “Just copy this down on your slip, and you’ll be in my class.”

That was my introduction to the man who would become my college advisor for the next two years, until his retirement. His lectures opened my eyes quite a bit, but it was the questions he took afterwards that were really amazing. This was during Reagan. Most people in that movie theater had never been exposed to a viewpoint like his. A few were real assholes. But he patiently answered every question, rose to every challenge, and engaged us all. He had the full & utter respect of every person there, regardless of their point of view.

I had begun writing for the college newspaper, the Daily Free Press. My sophomore year, they gave me a weekly column. After the first few weeks, I see Howard on Commonwealth Avenue. He seems very excited. “Your columns are exceptional,” he goes, “keep them coming.” I said, “OK.”

Halfway through that semester, President John Silber announced that Gastha Buthelezi, the Zulu leader aligned with the apartheid regime, would be getting an honorary degree from the University. In the announcement, he compared the tribal leader with BU’s most famous alum, Dr. Martin Luther King, Jr.

So I wrote a tough column slamming the decision. The next day, the Assistant Dean wrote a letter to the editor. It was longer than the piece that I wrote. In it, the Dean labeled me “ignorant” and “an embarrassment to the University.”

Howard’s words to me in the days that followed, sustained me immeasurably. I was still only 18 years old. It turned out that the Assistant Dean was a white South African. The black student union, Umoja, called for a boycott of classes. On the day the honorary degree was bestowed, there was a huge rally. The divestment movement was gathering steam. The featured speaker was Howard Zinn.

Over the next couple of years, we would see the pillars of apartheid crumble. I continued writing about issues on campus & off. At the end of my junior year, Howard told me, “I’m retiring.” So I wrote a column entitled “Howard Zinn: a man for all political seasons.” We stopped by the movie theater for his last class. When it was over, he led us over to the School of Nursing to join the nurses strike.

I coaxed him out of retirement, briefly, to sit on my thesis committee. He was kind, but said he liked my columns better. We corresponded somewhat over the years. Most notable was a response to an article I sent him about owner move-in evictions. Chris Daly & I got arrested for lying in front of Willie Brown’s car.

“Good work,” Howard wrote. “I love it when you get after Willie Brown!”

Jamie Sanbonmatsu is a City Housing Inspector, and the founder of the Code Enforcement Outreach Program in San Francisco.