How I Learned to Start Worrying and Fear the Bomb 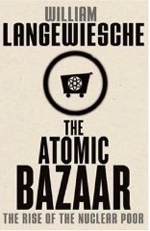 In your mind’s eye, you’re seeing the news footage. You see the men, women, children — an entire village — sprawled, unnaturally, where they fell, garments rippling in the wind as the camera pans slowly across the carnage. For decades chemical weapons have carried the grim moniker “the poor man’s atomic bomb”; after all, even MacGyver could make Chlorine gas by mixing household ammonia and bleach. That being said, the longtime nickname has grown obsolete. Now, and even more so in the future, the poor man’s atomic bomb will be – an atomic bomb.

William Langewiesche, a longtime correspondent for The Atlantic magazine, is a man who is nigh well incapable of writing badly. Regular readers of that periodical can see his books coming together as, over the course of several years, he obsessively immerses himself in a series of articles tied together by a common theme. In the past he documented the “unbuilding” of the World Trade Center, the Byzantine realm of international shipping, the dynamics of the U.S.-Mexico border and, now, nuclear proliferation.

“The Atomic Bazaar: The Rise of the Nuclear Poor” is the wiring together of three Herculean Atlantic articles following a shorter introduction that appears to be largely culled from the author’s magazine work. Langewiesche’s toughness, thoroughness and competence as a journalist is simply first-rate here and his unadorned writing is compellingly readable. With this book, he’s created an odd hybrid: The nonfiction tragi-thriller. One can’t put down this tale of real-life, diabolical intrigue that is, simultaneously, a book so depressing it ought to come shrink-wrapped with a fifth of Jim Beam.

The opening essay is the sort of work every journalist wishes he or she could produce and only a thimble-full do. Langewiesche has, in his obsessive way, become an autodidact on what it would take to build a crude atomic weapon. So he sets out to determine how the sort of person whom, in his repeated, chilling, throwaway statements would detonate a bomb in “say, New York City” might get a hold of the raw materials.

Langewiesche quickly rules out the notion of Al Qaeda types purchasing a working bomb or even the critical components from rogue powers such as North Korea or Pakistan as the reprisals for arming nuclear terrorists would be the most extreme in the history of mankind.

(He does not, however, address the notion of a nuclear Iran continuing its decades-long policy of sponsoring terrorism in other nations, nor does he address Iranian leaders’ repeated statements that trading several million casualties with Israel would be worth it. This is a big oversight, but it’s just about my only major problem with this book.)

The author leads his readers on a nuclear choose-your-own-adventure: Should you go for a Plutonium bomb or enriched Uranium (it has to be Uranium all the way). Should you ply the black market in Turkey or head to the former Soviet Union (only rank amateurs try to sell their low-grade nuclear junk in Turkey, everyone knows that).

In describing the economic prospects of Ozersk, a nuclear depository and blighted, quasi-irradiated Siberian city, Langewiesche’s curmudgeonly style is in full force.

“There are attempts to diversify [from a nuclear-centered economy]. The South Urals Vodka Distillery, for instance. And a manufacturer named Bur-Invest, which talked the British government into underwriting the production of what it describes as ‘ecologically safe wooden furniture for preschool children.’ And a group of former weapons designers who bravely call themselves Ozersk Confectionry and intend to sell their sugar-cream, flaky fluff pastries throughout the Urals and Siberia.

“In other words, Ozersk is in the nuclear business and nothing else.”

Langewiesche asks the tough questions and charts out the dire scenarios it appears U.S. security and intelligence services are not preoccupying themselves with. While millions of dollars of taxpayer money is flowing to secure former nuclear sites in Russia – and the Russians, incidentally, are happy to take the money – the expensive doo-dads the Americans purchase are not being used. After all, why run everyone through the radiation detector when the damn thing just goes off all the time? Why go through the gate when you can cut 15 minutes off the trip by going through a hole in the fence?

Perhaps the most tangible symbol of the Americans’ “premature surrender” in the war on nuclear smuggling is the U.S.-funded construction of a lavish checkpoint (complete with sports fields for the soldiers) on the Georgia-Azerbaijan border – a checkpoint no one with several bars of Uranium would dream of heading through.

“Faced with the need to put systems in place that will function day after day to identify unexpected nuclear smugglers, America turns to the uniformed agents of a corrupt local government, loads them down with air-conditioned buildings and gadgetery, then asks them to sit in a closed room watching for information from television cameras and radio monitors – to which it paves the roads,” he writes.

If America is hit by nuclear jihadis, Langewiesche notes, it will be because of a systematic shirking of the basic principles of counter-terror such as this. Not bedtime reading, no. And it gets worse.

The next two sections of Langewiesche’s book trace the hideous saga of Abdul Qadeer Khan, the Pakistani nuclear scientist who clandestinely birthed his nation’s atomic weapons program and then became the greatest nuclear proliferater the world has yet known, spreading lethal technology to virtually every country that really, really shouldn’t possess nuclear weapons.

Langewiesche is many things, but he is not an “objective journalist”. He has his opinions and lets his readers know them, whether it’s about great things or small (he notes sighing with boredom during an interview with one particularly long-winded nuclear scientist).

It’s clear from both what Langewiesche writes and the way he writes it that A.Q. Khan deeply disgusts him (one doesn’t include descriptions in a hagiography such as “in his middle age, he had become a fleshy, banquet-fed man, unused to criticism and outrageously self-satisfied.”). Either way, if ever you wanted to know how a Pakistani scientist helped ignite nuclear weapons programs in locales such as North Korea, Iran and Libya, this is the book to read.

Bit by bit, Langewiesche details Khan’s theft of highly secret centrifuge plans from his onetime Dutch employers, his rise to unchecked nuclear kingpin and the spread of his network. It is a masterful summary of not just how Khan ascended into the position of the third world’s nuclear candyman but an indictment of an utterly corrupted society. Pakistan is a place in which those with money and power can do, literally, whatever they wish and leaders, such as former Prime Minister Zulfiqar Ali Bhutto state that the nation will not be denied nuclear weapons, even if the Pakistani people must “eat grass to cover the cost.” In essence, both of these things happened.

In the final chapter, Langewiesche introduces us to Mark Hibbs, a reporter for highly specialized nuclear trade magazines, who, several steps ahead of American intelligence (which would rather claim ignorance anyway) revealed Khan’s international racket.

The reverence with which Langewiesche – a hard man – writes of Hibbs is most noteworthy. But to summarize Hibbs’ accomplishment, imagine Woodward and Bernstein cracking a nuclear weapons network without the aid of Deep Throat but just a cavalcade of spreadsheets noting sales of various tubes, hunks of iron or centrifuge equipment from one shadowy purveyor to another.

Incidentally, yes, American intelligence knew what was going on. For a long time. And, yes, we still invaded Iraq — and even diverted a lot of top intelligence people there as well who could have, you know, done something more productive

In the end, Langewiesche’s masterful writing delivers a pair of messages one ignores at his own peril: American intelligence is asleep at the wheel. And any nation willing to develop nukes even if it must eat grass will, indeed, develop nukes.

So, I’ll take my Jim Beam straight up, please. And keep ’em coming.