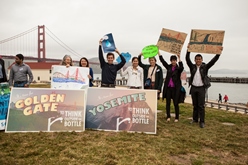 When you hear the words “bottled water” and “image,” what comes to mind first? A few weeks ago, I was tabling outside Rainbow Grocery in San Francisco and posed this question to a group of third graders. They were on a field trip to learn about sustainability. The leader of the pack, who I’ll call Amy, said, “Mountains! And lakes!” Her friend then chimed in. “Trees! And mountains too.”

Despite their young age, Amy and her friend have picked up precisely what the bottled water industry wants: the association of bottled water with our world’s most beautiful places. Yet almost 50 percent of bottled water comes straight from the tap, and the rest is less highly regulated than the tap.

I then asked Amy more about her environmentalism field trip, and whether she thought that bottled water was good for the environment. She thought for a minute, and then said something like, “Sure. Mountains are nature. And my mom drinks it and she cares about the environment. Yep.”

In reality, the production and transportation of bottled water takes 2000 times the energy as the tap, and Americans use enough plastic water bottles every year to circle the equator 217 times end-to-end. That mountain of bottles generates more than 25 million tons of greenhouse gases—the equivalent of putting 4.7 million more cars on the road for a year.

This is nothing new. Bottled water corporations like Coke, bottler of Dasani brand bottled water, have spent decades using our most treasured places—our national parks—to sell and promote their brands. Back in the 1960s, Coke launched its inaugural marketing campaign with the National Park Service (NPS). Titled “Discover America,” this campaign included the names of 36 of our national parks and monuments.

Why? To continue being able to use national parks to paint bottled water as green. Right now, this greenwashing technique is finally under the public spotlight, as people nationwide call for parks to stop selling bottled water. For Coke, being a major donor to the NPF comes in handy, enabling them to avoid public scrutiny by stopping parks from going bottled-water-free.

Coke executives aren’t too pleased. Although the Grand Canyon went bottled-water-free, Coke used its influence to make that transition difficult for other parks. Parks like Yosemite and Golden Gate National Recreation Area (GGNRA) must now individually petition regional superintendents and overcome a series of bureaucratic hurdles to go bottled-water free.

That difficulty is precisely why a growing movement in the Bay Area, led by the membership nonprofit organization Corporate Accountability International, is working to give the superintendents of Yosemite and GGNRA the public support that they need to make this same move. Building on their sustainability track records these leaders, can now take the logical next step by going bottled-water free. Not only will this protect their parks from plastic pollution it also promotes strong public water systems. A coalition of over 90 businesses, organizations, and outdoor enthusiasts, represented by the San Francisco Board of Supervisors President David Chiu, world-renowned rock climbers including Alex Honnold and Hans Florine, and Michelle Myers, the Executive Director of the Sierra Club Bay Chapter, is leading the way.

Honnold, whose free-climb ascend up Sentinel in Yosemite made for an Emmy-nominated “60 minutes” piece, said, “Bottling and transporting water is a colossal waste of resources that the parks should in no way help promote. If anything, the sales of bottled water fosters a kind of disposable view of the world around us that is anathema to the park’s mission to “preserve unimpaired” our wild places.” I couldn’t agree more.

By changing the way people think about water, corporations like Coke create that dangerous “disposable view of the world.” For me, that mind-set of mindless commodification threatens our environment, health, and democracy. Water, like Yosemite and GGNRA, is not for sale and deserves long-term investment.

You can protect our parks and public water systems by signing our bottled-water-free national park petition at www.stopcorporateabuse.org. And come get involved at our upcoming Activist Training Workshop, led by Corporate Accountability International, the non-profit organization working full time in the United States to stop corporate abuses that threaten people’s lives and well-being around the world. The workshop will be held next Wednesday, April 3, from 7-9pm at Global Exchange (2017 Mission St., San Francisco). The workshop is free and all are welcome to attend. RSVP Here or contact Hanna at hanna@greencorps.org for more details.