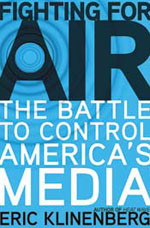 George W. Bush’s disastrous presidency has left many Democrats fondly reminiscing about the Clinton Administration. This nostalgic wave has made Hillary Clinton the frontrunner for the 2008 Democratic nomination, and her husband Bill is more popular than ever. Eric Klineberg’s “Fighting for Air” provides a timely wake-up call to those pining for a return to the Clinton days, as its main subject matter—media consolidation—was made possible by President Clinton’s support of the Telecommunications Act of 1996. From the rise of Clear Channel to the corporate control of virtually all traditional media, Klinenberg describes how the Telecommunications Act moved American politics to the right and dramatically reshaped the nation’s media. A book akin to a new version of Ben Bagdikian’s classic “The Media Monopoly”, “Fighting for Air” also has a good critique of our local fight between the SF Weekly (part of the Village Voice media chain) and the SF Bay Guardian over the steadily diminishing readership for “alternative” weeklies.

Eric Klinenberg makes many points about media concentration that will be familiar for those who regularly listen to Pacifica Radio or read non-corporate media. But his book provides all of the facts necessary to confirm the evils of media concentration, particularly as it regards so-called alternative weeklies.

Because I was already familiar with much of Klineberg’s discussion of Clear Channel’s rise and impact, I was most interested in his analysis of how “alternative” weeklies have been gobbled up by an anti-activist, anti-progressive corporate chain. This chain, once known as the New Times Corp., owns the SF Weekly, the LA Weekly, and the Village Voice, and now goes by the name of “Village Voice Media (VVM).”

Although David Armstrong and others have described the corporate takeover of alternative weeklies, Klinenberg provides many details about VVM that reveal the corporation to be even more destructive to “alternative” journalism than many realize. He traces the origins of the Village Voice as a neighborhood newspaper founded by Norman Mailer and others, to its current status as one of the top properties in a national chain whose ethos is contrary to everything the paper’s founders believed in.

VVM now owns 25% of the Association of Alternative Newsweeklies market, covering an estimated 4.3 million readers. It also owns the Ruxton media group, a marketing consolidator that sells ads for 35 weeklies nationwide. This combination has allowed VVM to dominate the weekly market, and has given rise to the Bay Guardian’s lawsuit against VVM for predatory advertising practices at the SF Weekly (which goes to trial later this year).

Klinenberg’s analysis of VVM’s coverage should come as no surprise to anyone familiar with the SF Weekly. VVM papers “cover government aggressively, ever on the lookout for corruption or hypocrisy.” But when it comes to the private sector, “business stories are stripped entirely of politics, focusing instead on the amusing and bizarre.”

VVM media outlets ensure that their writers are “wary of people who protest for a living,” and they are conditioned to “make fun of” professional activists.” This is the sad trajectory of a weekly media that formed in response to inadequate mainstream media coverage of the Vietnam War, and which, prior to the emergence of the New Times agenda, was a medium that fueled, rather than ridiculed, activism.

Like Neil Henry’s recent American Carnival (also reviewed in these pages), Klinenberg cites numerous examples of traditional journalism’s failures. But unlike Henry, he identifies such failures with consolidation and editorial downsizing, rather than with the media’s historic role of backing United States’ military actions abroad and corporate prerogatives at home. One could get the misimpression from “Fighting for Air” that daily newspapers were once aggressive fighters for truth and social justice; Henry squarely disproves this.

In fact, given his progressive politics it is surprising how often Klinenberg assumes that the urban dailies of the 1960’s and 70’s were significantly more attuned to local social justice issues than they are today. He even talks of how the “heyday” of San Francisco dailies would tackle investigative reporting, but does not mention, for example, how all of the city’s dailies uncritically backed the disastrous displacement of thousands through SOMA Redevelopment in the 1960’s.

In other words, media consolidation of newspapers has worsened coverage of poor people’s issues, but stories calling attention to economic injustice were the exception even in the media’s so-called “golden age.” While Klinenberg emphasizes the major dailies decline in local news coverage, there have always been community papers that better addressed local issues—the Berkeley Daily Planet being an excellent current example—and suburbanization has made coverage of “local” issues more difficult, as the San Francisco Chronicle’s longtime problems providing “zoned” editions showed.

Klinenberg’s case is far more convincing regarding consolidation’s impact on radio and television news, both of which are much less responsive to local needs today than prior to the passage of the 1996 Act. This book reminds us of how the Act’s passage quickly and dramatically changed America’s media scene: while in 1984, a company could only own twelve television stations, the 1996 Act allowed it to own stations reaching 35% of nationwide viewers, a total raising to 39% by 2004.

So thanks to Clinton media reform, one company could own television stations reaching over a third of all Americans. And this meant that right-wing television companies like Rupert Murdoch’s FOX NEWS, and the even worse Sinclair Broadcasting, became the dominant media in much of what became red-state America.

Klinenberg tries to end his book on an upbeat note by citing the success of media reform activists, and what he describes as “low-power” media. But while he has a chapter on the Internet, the book does not give sufficient credit to political sites like dailykos.com that are continuing to replace traditional media.

Nor does he fully explore the decline in radio listening, particularly among young people. Clear Channel achieved market domination, but is now desperately selling off stations as the ipod and Internet have reduced their value. In some respects the book’s emphasis on Clear Channel’s rise is a bit outdated, though it is an important lesson during a campaign season when the Clinton family is asking voters to back Hillary based on Bill’s performance as President.

Hillary Clinton should have to explain her stance on the 1996 Act, and “Fighting for Air” gives activists and journalists all of the facts necessary to demand answers from the Democratic frontrunner on this critical issue.