How Buses and Bicycling Improve Cities 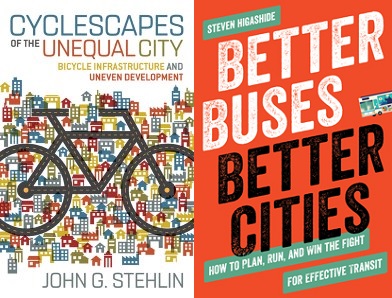 From New York City’s 14th Street to San Francisco’s Market Street, cities are finally stopping cars from dominating the urban landscape. But there is much work left to be done.  This makes two new books about green alternatives to cars particularly timely. Steven Higashide’s Better Buses, Better Cities makes a convincing for cities to prioritize improved bus service. John Stehlin’s Cyclescapes of the Unequal City: Bicycle Infrastructure and Uneven Development urges city support for bicycling but finds a bicycling-gentrification connection that the evidence does not back.

Whenever talk turns to buses longtime stereotypes emerge:  only those who cannot afford to buy a car take the bus, buses are inferior to light rail and subways,  buses are too slow a transportation mode and that buses are primarily used for work commuting. Higashide quickly covers these assumptions so readers know from the outset that he recognizes the challenges of promoting buses. He does not romanticize riding the bus experience; instead, he shows how proper operational management can and should increase public support for effective bus service.

Higashide also reminds us that buses can move the greatest number of people through cities in a short period of time. This makes anti-bus prejudices particularly counter-productive.

Higashide shows that the problem with city bus services is how city transit systems misuse this mode of transportation. Do your city’s buses stop every block to ensure slow transit? Are schedules unreliable? Are there excessive delays due to single points of bus entry? Do buses lack of specific lanes?

For most cities the answers to most if not all of these questions is yes. And Higashide convinced me that all cities can and must do better.

Higashide’s big picture point is that buses could make a huge difference in cities but have been victimized and stigmatized by poor management. Fortunately, he lays out strategies for managing bus systems that all cities can use. He shows how specific cities have benefited from his recommended strategies—-such as adding bus shelters with seats, front and back entry doors, preventing bunching, creating Bus Rapid Transit lanes to avoid traffic—and leaves readers wondering why their own cities have not implemented them all.

Buses are seen as low-tech when compared to light-rail and new subways.  Higashide notes how our preference for the latest new technological transit advance has reduced support for improving bus service.

But technology can improve bus service. It can improve scheduling, install BRT systems, and implement efficient payment systems. How often have you been frustrated by not having exact change to board a bus? Why do transit systems even require riders to ever carry multiple quarters? That outdated operational approach has turned people away from buses.

A huge problem is that federal transportation funds cannot be used to operate buses. That’s why cities raise fares to cover operations, leading to a steady spiraling of fare increases and declining ridership (AC Transit in the East Bay is a classic example of this). But buses remain the most cost effective local transit strategy and deserve greater local resources. It’s shameful that San Francisco allowed a small number of merchants to hold up the Geary BRT for almost two decades. Or that excessive stops on Mission and other top transit corridors continue because merchants benefiting from existing routes oppose any change.

Higashide recognizes “there isn’t much that is ‘sexy’ about improving the bus” and that the specifics on improving service can feel “granular, or technical or bureaucratic.” But “each step to improve bus service represents a meaningful improvement in the lives of hundreds of people who wait at a particular bus stop.” I finished his fast-paced 142 page book convinced that implementing his strategies would make a huge difference.

Higashide shows transit advocates what works in other cities, enabling them to “learn from the triumphs and pitfalls of others.” Better Buses, Better Cities is likely the best book ever written on improving bus service in the United States.

John Stehlin’s book on rising bicycle advocacy includes a lot of material on San Francisco. He sees support for expanding bike lanes by downtown groups like SPUR as part of an elite, pro-gentrification agenda to connect a greener use of streets with economic growth. Bicycling is designed “to attract members of the elusive ‘creative class’…as bicycle infrastructure becomes another valuable amenity in the urban portfolio…”

If you enjoy reading this type of language and agree with this analysis, you will enjoy the book. I had a problem with it for one big reason: gentrified cities hardly have any bicycle infrastructure, a conclusion confirmed by Stehlin’s data.

The book includes a chart of the Top 20 Cities in Bicycle Commute Share (of 70 largest cities), 1990-2015. Portland, the top city, had only 6.4% of its workers commuting by bicycles in 2015. Minneapolis was second at 4.3% with San Francisco and Washington DC at 4%. Heavily gentrified New York City was at 1%.

Regionally, among the top twenty metro areas for commute share of bicycling was Cambridge-Boston-Newton at under 1%. The highest regional percentage was Portland, Or—Vancouver and Hillsboro, WA at 2.4 %.

If gentrifiers saw bicycling as a critical ally, why did every major gentrified city in the United States fail to create a strong bicycling infrastructure? San Francisco, which he writes the most about and is arguably the nation’s most gentrified city, has remarkably few protected bike lanes. And many did not come until 2019,  installed in SOMA and other long gentrified neighborhoods.

I explain in Generation Priced Out: Who Gets to Live in the New Urban America how progressive “blue” cities gentrified for multiple reasons. The rise of a bicycling infrastructure was not among them. Sadly, America’s gentrified cities remain controlled by King Car despite those Stehlin identifies as “elite” interests supporting a robust system of protected bike lanes (For example, the mayor of gentrified Portland backs a $500 million highway expansion; that’s the type of transit spending “elite” interests still favor).

I wish progressive cities had accompanied gentrification with the installation of a protected bicycle infrastructure as in Copenhagen, Amsterdam and many other European cities. But that did not happen. And it’s still a battle to make it happen, as post-gentrified cities also struggle to end parking minimums, restrict driving, and return streets to pedestrians.

Stehlin offers a lot about San Francisco’s biking history, from Critical Mass to the present. He deserves credit for examining a still overlooked issue, which is how urban America misuses its streets.

Randy Shaw is Editor of Beyond Chron. He led what became an over decade long effort to get two-way streets on Ellis and Eddy in the Tenderloin. He is also the author of Generation Priced Out: Who Gets to Live in the New Urban America