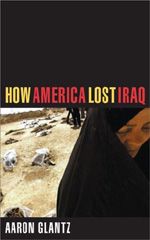 Once a correspondent for Berkeley-based KPFA, 94.1. FM., San Francisco native Aaron Glantz has been reporting for Free Speech Radio News from in or around Iraq since the US invasion. During this time, Glantz has offered listeners insightful coverage of the response of the Iraqi people to the US intervention and occupation.

Glantz’ s analysis, and his expose of key facts not widely reported in the American media, can now be found in his just released book, Why America Lost Iraq. This may well be the best single book on the subject, and is strongly recommended to Beyond Chron readers.