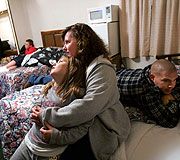 On Thursday, September 20, 2005, homeless families camped out at City Hall under Mayor Gavin Newsom’s office balcony. Their goal was to hold Newsom to his October 13 promise to focus on housing them “first.” Partly because homelessness is so hard on their children, they wanted to be included in the “Housing First” category along with the “chronically homeless.” They first presented a list of their recommendations to the Mayor the previous month, on August 17, 2005.

Two weeks later, November 3, 2005, recalling their protest, I walked to the Presidio’s Inspiration Point lookout over San Francisco Bay. Treasure island floated in a cobalt blue mist, Berkeley and Oakland in purple, and Alcatraz in pale yellow. Between whisps of clouds, tinged pink from the setting sun, a silver fingernail of a moon hung in a blue-gray evening sky.

At almost-dark, some mighty hand flipped a switch lighting the dome of the Palace of Fine Arts from inside like a big half peach. Sparkles of light studded The City and the East Bay shore. I thought how the money spent on the incredible power in those lights could, in this single instant, house for a year every homeless person who slept on streets or in shelters tonight.

I imagined a 15-year-old boy sitting alone in a room, his dark head bent over his book studying.for tomorrow’s classes at SOTA, San Francisco’s School of the Arts. Because of his talent, he and his mother had hopes for his future in art or theater. He auditioned and was accepted into this four-year unified school district’s distinguished high school visual arts program. Recently, a congenital eye problem, exacerbated by his sudden teenage growth spurt and the stress of moving around, threw his artistic future into question. He is now legally blind in one eye.

When he was younger, he and his mother, Maxine Pauson, a disabled domestic violence survivor, roomed with other people. As he got older, that became increasingly difficult. He needed his own room and his own space. Yet, he is forced to share shelter with his mother, confined to the room together even when both are sick. Ironically, permanent housing rules require a teenager and parent have separate rooms.

His mother’s congenital disc herniation left her in pain. She had to take anti-inflammatory pills and lie down during the day. Because she could not sit for long periods, she could not work. Her disability entitlement was so low they didn’t have enough to rent their own place. Staying with others, they fell into the legal definition of “homeless.”

Seven years ago, when her son was eight, Maxine put them on every subsidized Section 8 and public housing waiting list she could find in every county surrounding San Francisco, plus many further away — even San Diego. They got no offers at all.

I pictured him studying tonight in a small shelter room in a former Catholic convent, the St. Joseph Family Center South of Market at 10th and Howard. For a year and a half they lived in five different shelters, waiting six months to be placed in the first one in Petaluma.

He loved his school, He took the long bus ride each day to continue to go there. It seemed ridiculous to Maxine that the McKinney act paid his fare back and forth when the money would be better spent on affordable housing.

Maxine expressed her feeling that the system is broken when priorities are so off balance.

First was Reagan’s 1980’s political spin on poverty mothers as “welfare queens” and an attitude that placed less importance on stay-at-home women whose job is running a household and raising children. Though requiring massive skill sets, this is not seen as acceptable “work.”

Mothers, especially poor ones, are subjected to a shame-blame game. People do not seem to recognize that children, secondarily, are the actual victims of this attitudinal and institutional child abuse.

Second, entitlement programs like food stamps and section 8 housing were closed out one by one to pay for the Iraq war. Maxine asserted that, when one fights to get out of poverty, there is less and less to work with.

Maxine’s friend, Estelle Mata, 44, immigrated 14 years ago from Lagos de Moreno in Jalisco State. Lagos is a semi-arid, cattle-raising and dairy production area of western Mexico where a Nestle plant is located. Lagos’ residents have a 100-year history of U.S. migration.

Before her 18-month-old son, Steven Michael, was born, Estelle worked as a cashier, restaurant worker, dishwasher and housecleaner. Unable to afford childcare for her baby, she cannot work.

Estelle and Steven Michael currently stay at “44 McAllister,” an SRO hotel. She is happier there than she had been previously in two shelters.

“I have my own room, an electric plate and a kitchen for cooking (for her baby). I have a place in the refrigerator for keeping my food.”

“It was more difficult when I was living in the shelter because no single room. (Now) I have my single room.”

“La Casa De La Madres, very bad place, too. …(rigid) rules and you don’t have a place for cooking in the kitchen, (or) a place to keep food, like a refrigerator.

“The people put very heavy rules on me. because I’m not speak very well English. I’m no resident.

“When I live in La Casa De La Madres, (I had) pain on my left side very strong. I was working too much, seven days in the week with my baby in the kitchen, breakfast and lunch, washing dishes, cleaning the stove, mopping, sweeping the floor.” She was the only resident forced to work like a “slave” to stay there.

“They enforced this work on only me. I fight them. I make a big complaint, and cry” asking ‘Why?’ “They said, ‘Because you don’t have any care for your baby.'”

“I don’t want to go back to La Casa De La Madres (or) the shelters no more. I pray for my own place. I believe in God.

“At La Casa De La Madres every day I reading my Bible, and I pray. Now I have a clean room, a place in the refrigerator, and a place where I can cook.

“I don’t worry too much because I pray. I told Jesus, ‘You help me in three months. Please. Please. Help me.'”

Estelle and Maxine were part of the homeless families group camped out at City Hall on Thursday, October 20, 2005. Miguel Carrera and Jennifer Friedenbach of the Coalition on Homelessness, were lead organizers.

Miguel is from the Mexican State of Puebla, the town of Calipan, a farming community which grows sugar cane, beans, corn, tomatoes. He spent two years as a poverty activist working in the southeast border city of Tapachula in Chiapas.

A single man in San Francisco, Miguel was homeless. He worked four years without pay at the Homeless Coalition. Now he is a paid coalition organizer, has a family, his wife Julie and two young children, “my daughter, Selene, 7, and my little son, Emilio, 5,” and is housed.

His children sensitized Miguel to the pressures of homelessness on the very young.

“The shelter is not housing. (Children) need a real home. (Families) need a space for each child, a bedroom for the father and the mother to sleep in, a real kitchen, a diningroom. They need a playground where the children can play.

“The children need a real thing they have, that they can say, ‘That’s my home. That’s my place.’

“What happens when the children go to school with their friends? When other children say, ‘Can I go with you to your home to do my homework? Can I play with you?’ What do they say? ‘Um —My mom don’t allow (me to have) nobody in my home.’ They invent some story because they are nervous and confused, and not feeling good because they don’t have real housing. (Their housing) is a shelter.”

Miguel said this attack on the poor is also racist. “The majority of families who stay in the shelters or in SRO hotels are African Americans and Latinos.”